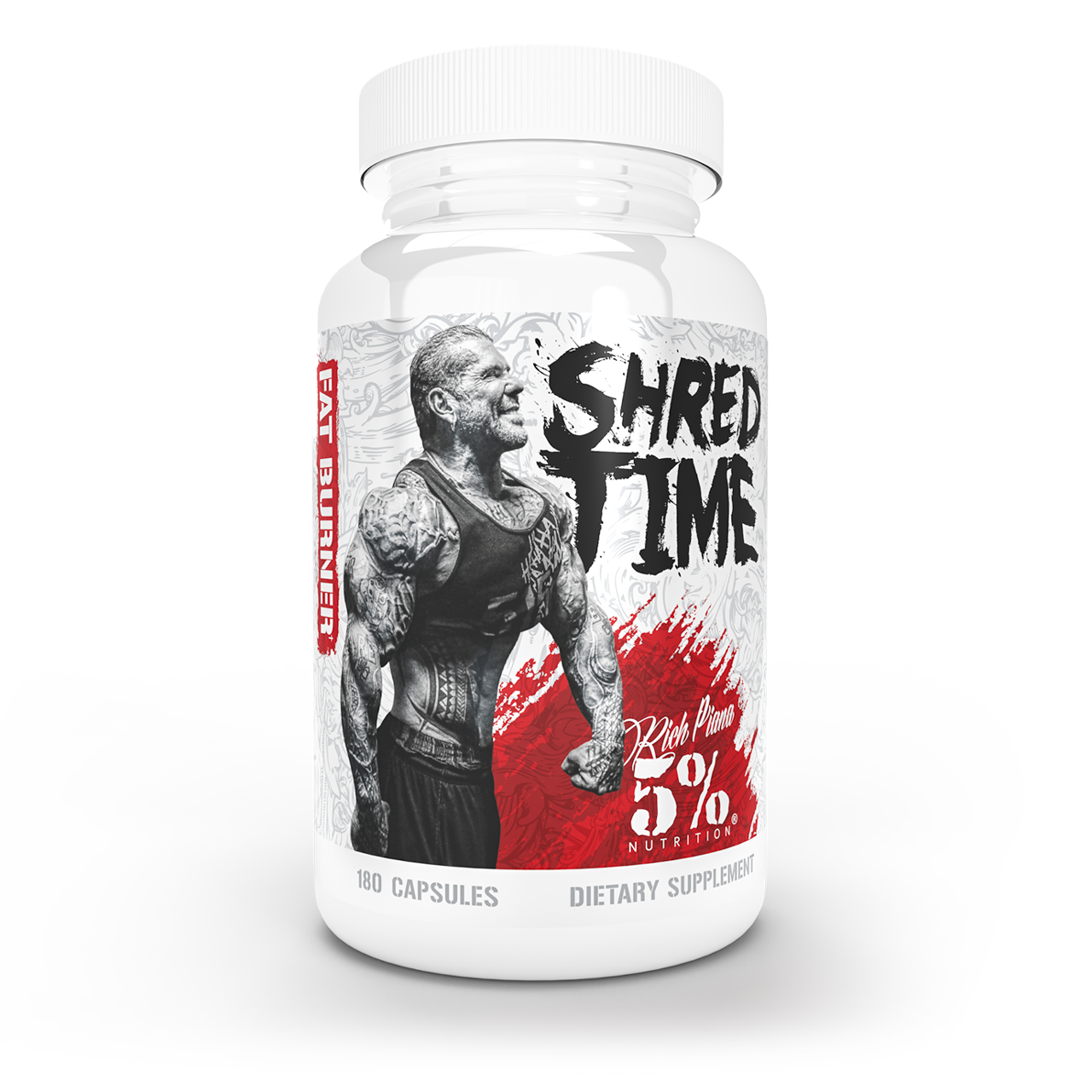 Rich Piana 5% Nutrition Shred Time is an OVERDOSED fat burner† packed with powerful ingredients! This is a formula that’s so hardcore, only 5% Nutrition could have created it!

THE MOST ADVANCED FAT BURNER ON THE MARKET!

Rich Piana 5% Nutrition Shred Time is an OVERDOSED thermogenic powerhouse that's packed with effective ingredients. We decided to step in and show the competition how it’s done. We use the most effective, well researched, and sought after ingredients available. Compare Shred Time formula to the competition and you will see what a real fat burner should look like.

We took the strongest legal, all-natural muscle building ingredients available and combined them into one incredible product, and we dared to make it stronger than any other product of its kind. Take a look at these ingredients:

Just like you’d expect from 5% Nutrition, Shred Time takes fat loss beyond anything the competition has to offer. We use a formula that targets fat loss using multiple pathways, giving you energy, focus, and mood elevation so you can conquer your workouts and your day.†

N-Acetyl L-Carnitine Hydrochloride – 1,000 mg – This highly bioavailable form of Carnitine is synthesized in the liver from the amino acids lysine and methionine. The primary function of Carnitine is to transport stored fat to the mitochondria where it can be used as energy by the body.(7)

Green Tea Extract – 500 mg – Standardized to 50% EGCG – Green Tea is well known for its antioxidant benefits. This is due to its active ingredients, known as catechins. The most effective catechin is Epigallocatechin Gallate or EGCG. Did you know that EGCG also targets the use of stored fat for energy? Here’s how: the hormone norepinephrine signals the breakdown of fat to be used as energy. EGCG inhibits the enzyme that breaks down this hormone, allowing it to send a stronger signal so more fat can be used as fuel.(8)

Green Coffee Bean Extract – 250 mg – This compound is unroasted coffee beans. This means the active ingredient, Chlorogenic Acid, stays intact. What does Chlorogenic Acid do? Preliminary research indicates it can help reduce carbohydrate absorption. Additionally, animal studies have suggested that it improves the function of the hormone adiponectin. This is considered the primary fat-burning hormone in the body.(9,10) These three ingredients work synergistically to signal your fat-burning hormones to burn stored fat for fuel.

Cocoa Alkaloids (Theobromine) – 50 mg & Theobromine – 50 mg – This compound is found in chocolate and kola nuts, as well as other foods. It’s similar to caffeine but has a milder stimulant effect. This means that theobromine helps ease the harshness of caffeine so you experience a smoother energy effect. Some companies simply load up the caffeine despite the negative effects it can cause. Leave it to 5% Nutrition to use two sources of this compound to help smooth out our hardcore caffeine dose.(11)

Gamma-Butyrobetaine Hydrochloride (GBB) – Some call GBB “Super Carnitine”. So what is it? GBB is a precursor to L-Carnitine and works by increasing the body's natural production of L-Carnitine. GBB has been shown to double the plasma concentration of carnitine in the body, which amplifies the effects Carnitine has to offer. One of the big selling points of GBB is that it increases sweating. This of course means increased thermogenesis for faster fat loss.(12, 13)

SWEAT IT OUT COMPLEX †

CaloriBURN® Grains of Paradise Extract – 50 mg – This is a plant that originates in West Africa and contains an active phenol compound called 6-paradol. The CaloriBURN form of Grains of Paradise is a premium quality, stim-free, herbal fat loss ingredient that contains 12.5% 6-paradol. This compound has been shown to stimulate thermogenesis in B.A.T. or brown adipose tissue. It does this by supporting the conversion of stored fat into BAT, which can then be burned as energy by the body.(15)

Cayenne Pepper Fruit Extract – 50 mg – This is a patented compound that contains an active ingredient known as Capsicum. It can stimulate an increase in the core temperature of the body (thermogenesis), which burns a greater number of calories as energy. Capsimax is designed to prevent the burning sensation that regular cayenne pepper can cause.(16)

Hoodia Gordonii Extract Powder – 375 mg – Hoodia is a plant originating in South Africa that has an extended history of use as an appetite suppressant. Traditionally, it was used by native tribes to help control hunger during hunting expeditions. Hoodia has become a popular fat loss aid due to its appetite control properties. It’s believed that Hoodia works by tricking the body into thinking it’s full. The active ingredient in Hoodia is P57 and was discovered by the South African Council for Scientific and Industrial Research in 1977.(17)

Saffron – 88.5 mg – Saffron is a spice that originates in Greece and has an extended history of medicinal use. Research has indicated that Saffron may control appetite and cravings by elevating mood, which decreases the desire to snack. Another mechanism of action suggests that Saffron increases the feeling of being full, so you eat less.(18) Who else but 5% Nutrition can create a powerful appetite suppressant complex that will bring your hunger to its knees?

Caffeine Anhydrous – 295 mg – There’s no doubt about it, Caffeine is the most popular energy and alertness compound on the planet. Beyond its ability to increase energy, improve focus and alertness, Caffeine is thought to stimulate thermogenesis.(19) We use several forms of Caffeine in Shred Time to create extended, smoother energy and activate thermogenesis. This version of Caffeine has all the moisture removed, making it stronger gram for gram than regular Caffeine.

NeuroFactor™ Coffee Fruit Extract – 50 mg – This patented natural extract comes from the coffee arabica plant. NeuroFactor™ has been shown to dramatically increase levels of a protein known as Brain-Derived Neurotrophic Factor (BDNF). This protein is active in the brain and central nervous systems. It supports memory, learning, and cognitive function. NeuroFactor™ produces a stimulant-like effect that works well with the other forms of Caffeine in Shred Time.(20)

Guarana Seed Extract – 10 mg – This is a South American fruit that contains 22% Caffeine. That’s more Caffeine than a coffee bean! Guarana has a slow energy release because of compounds called tannins, leading to a smooth, extended energy experience.

Infinergy™ Dicaffeine Malate – 10 mg – Infinergy™ is a combination of Caffeine and Malic Acid that increases energy, elevates focus, and stimulates thermogenesis. This type of Caffeine is buffered for reduced stomach discomfort. Malic Acid is involved in the cellular energy processes of the body, therefore, this compound increases energy in two ways. As you can see, we’re talking about a serious caffeine complex that’s long-lasting without the usual negative effects. Of course, you’re looking at extended energy and thermogenic power! Only 5% Nutrition could create a stim complex like this.

How to use Shred Time:

Take 6 capsules by mouth with food in the morning. Do not exceed 6 capsules per 24 hours.

To assess your tolerance, take 3 capsules by mouth with food in the morning and 3 capsules with lunch and gradually increase to 6 capsules once daily.