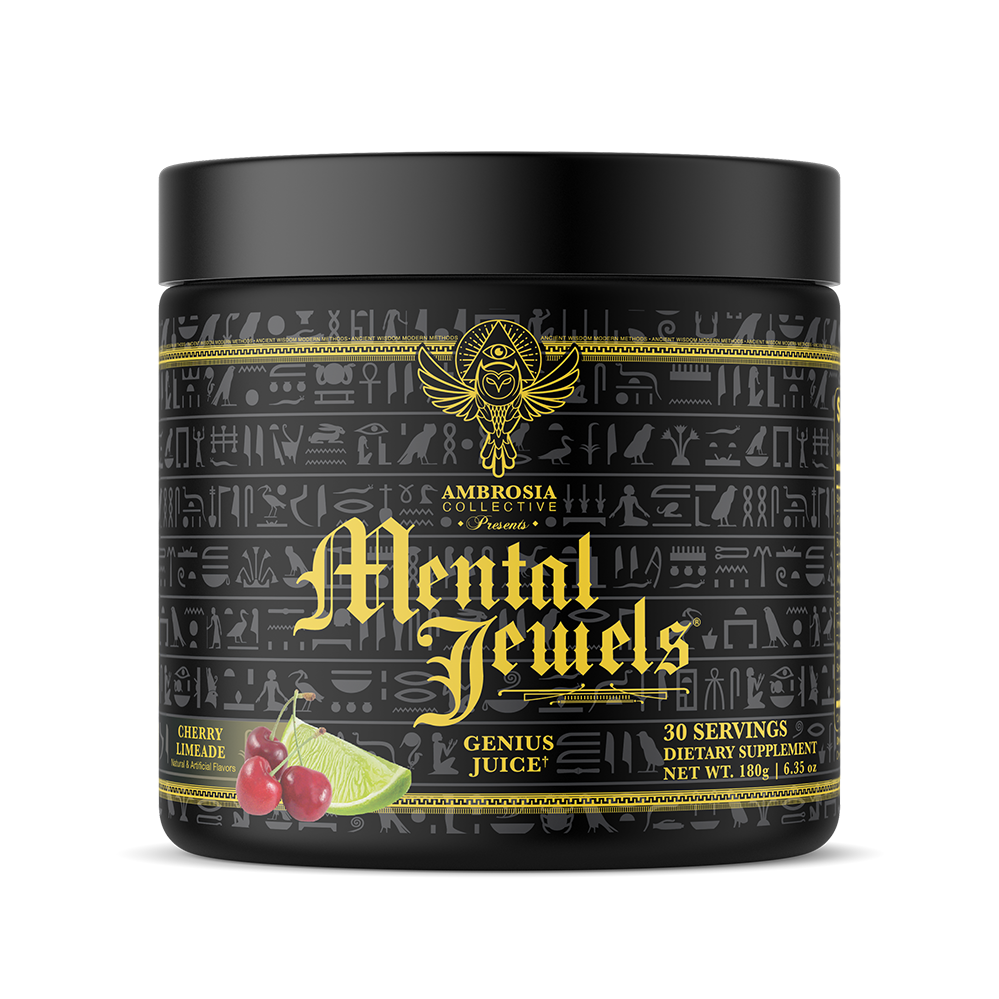 BIO-HACK YOUR BRAIN AND ENHANCE YOUR WHOLE SELF

Mental Jewels™ Powder is formulated to help uncover your true mental potential. With clinical doses of secret-society worthy ingredients such as Alphasize™, SerinAde™, BaCognize™, and multiple other proven mind stimulating jewels, you will be on the path to true enlightenment. Ascend to the peak of your cognitive capabilities and feel the benefits of boundless mental aptitude.

Mental Jewels™ formula is AlphaSize® the highest quality and most proven form of Alpha GPC (Alpha Glycerylphosphorylcholine). Alpha GPC is known to be the most effective source of the very important micronutrient, Choline, which has been shown to contribute to learning and memory by increasing the Acetylcholine neurotransmitter. While we can obtain some choline in our normal diets, studies have shown that 90% of Americans are deficient in this crucial nutrient. As the most abundant neurotransmitter in the brain, Choline plays a key role in every cognitive function; and thus less than optimal levels can lead to a decline in mental acuity. AlphaSize® is the best and most efficient source for Choline Supplementation.

SerinAid 50P® the highest quality and most proven form of PS (Phosphatidylserine). PS is a very important nutrient that assists proteins managing membrane functions, assists the entry of nutrients into cells and the exit of harmful, stress-related waste products out of cells, and is involved in transmission of molecular messages from cell to cell.

BaCognize® - the highest quality and most proven form of Bacopa (Bacopa Monnieri). Bacopa is an amazing botanical nutraceutical ingredient that has been used in various forms for thousands of years in traditional medicines. The specific Bacopa Glycosides found in BaCognize® have been proven to be highly active at the 5HT-1a Receptor which is responsible for our Serotonin production. Serotonin is an important neurotransmitter that is responsible for carrying signals through the body.

Medical research and clinical trials have identified huperzine A as a beneficial ingredient in the treatment for diseases and conditions associated with neurodegeneration, such as myasthenia gravis and Alzheimer's disease. In one recent study, sixty middle-aged and elderly patients with impaired neurological faculties were given either Hup A or a placebo for a period of sixty days. Physiological and psychological testing both before and after treatment was conducted on these patients; researchers found that the patients who were treated with Hup A improved over the course of the study by 43 to 70%. This study also confirmed both the efficacy and the safety of the consumption of Hup A.

Glucuronolactone is a naturally occurring compound produced in the human body during the metabolism of glucose. It is also commonly found in different plants. Research studies suggest that glucoronolactone can help increase our natural energy an endurance levels while we go through our day and even while we exercise. It can also increase our ability to recover after moderate to intense activity. The benefits of glucoronolactone are as great for the mind as they are for the body. It can increase mood levels and improve cognitive performance as well.

Since Ephedra was taken off the market as a dietary supplement ingredient, something has been missing in energy formulas. In this highly competitive market, the search is always on for a new ingredient that will increase energy levels, maximize mental focus and accelerate thermogenesis. With this in mind, Infinergy™ DiCaffeine Malate was developed and introduced. Infinergy™ represents a precise combination of Caffeine and Malic Acid into an true ionic bonded compound. By combining the well-established properties of Caffeine and Malic Acid, Infinergy™ offers the Mental Jewels™ formula a multi-dimensional ingredient that not only optimizes energy levels, but also stimulates thermogenesis while promoting mental focus.

Cordyceps are utilized for the compound within them known as Sinesis. Containing the active ingredients adenosine and cordycepic acid, as well as a host of phytonutrients, cordyceps has been shown in some studies to increase oxygen utilization, aerobic capacity, and cellular energy. Cordyceps have been shown in a published double-blind study to increase Oxygen Utilization By 50%. This lets muscles and the mind perform better with less signs of fatigue. In a separate study published in the American Journal of Clinical Nutrition, Cordyceps was shown to increase aerobic capacity by 9% - resulting in higher levels of long lasting energy.

This compound is carefully extracted from the Eleutherococcus Senticosus plant, also known as Siberian Ginseng. This adaptogenic herb has been used for centuries to help the body adapt to daily stress, making it an ideal compound for those leading a physically or mentally demanding and jam packed, hectic lifestyle. Its abilities to energize the body and the mind as well as promote immune health have made it a favorite natural ingredient of Russian athletes for decades.

DIRECTIONS: Mix 1 scoop with 8-12oz of water for preferred taste concentration and drink 20 minutes before the most mentally demanding part of your day. If desired, an additional 1/2 scoop to 1 scoop can be taken 4 hours or more apart from your first dosage. Do not consume more than 2 servings per day.