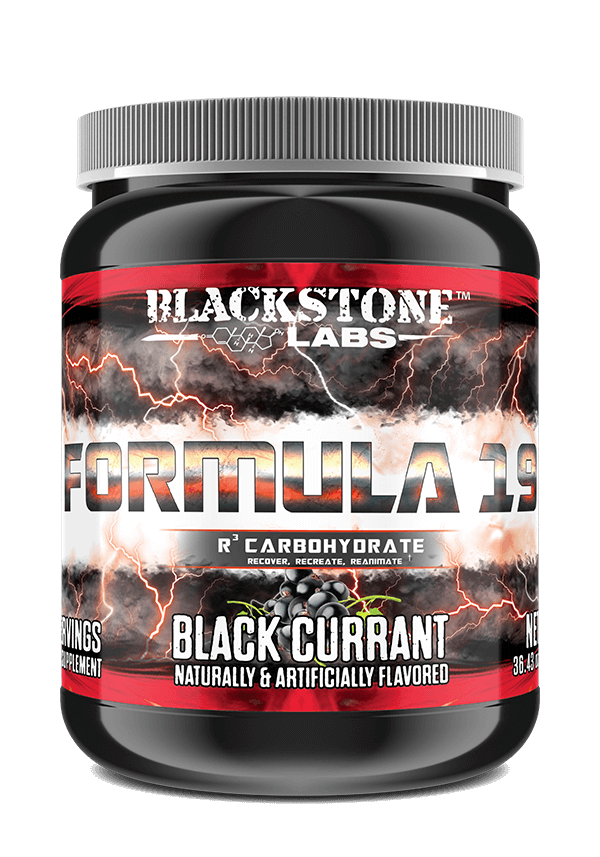 The Science behind each scoop of Formula 19:

A scientifically studied blend of 3 different carbohydrate sources designed to be quickly absorbed into the blood stream immediately upon ingestion at a rate much faster then dextrose but without a negative effect on blood sugar levels. The R3 carbohydrate formula will absorb at an accelerated rate but also leave the user with sustained energy like a complex carb source. This is the ultimate fuel for your muscles both pre and post workout.

Magnesium Glycyl Glutamine chelate - The only stabilized glutamine in the world, protected by an exclusive patent. Glutamine is an amino acid that serves as a necessary building block for protein in the body. It is also the amino acid lost in the greatest quantity during strenuous exercise. In fact, countless research has shown that glutamine is consistently deficient in athletes during and after exercise sessions. In addition, people suffering from illness and disease have been shown to be deficient in glutamine, which is essential for the body to repair itself. When an individual is in a catabolic state due to strenuous physical activity, illness, injury or nutritional imbalances, glutamine homeostasis can be compromised. Supplemental glutamine is required to restore plasma glutamine levels, protect glutamine stores, and help conserve lean muscle mass. The magnesium glycle glutamine is the first totally stable form of glutamine discovered providing for superior absorption.

Leucine is one of the three Branched Chain Amino Acids and sometimes referred to as the 'main' amino acid due to the most popular benefit of BCAAs (muscle building) being mostly due to leucine. Leucine is an activator of the protein known as mTOR, which then induces muscle protein synthesis via S6K; the other two BCAAs may also activate mTOR, but are much weaker than leucine in doing so (and as such, 5g of leucine will be more effective than 5g mixed BCAAs). This dose of leucine post workout is arguably more important then taking in any form of whey or animal protein source because of the above description.

The antioxidant alpha-lipoic acid (ALA) improves the body’s ability to absorb and convert sugar (glucose) to energy (glycemic control-insulin sensitivity) Thus making it ideal to take with carbohydrates because of its "insulin mimicking effects" Bodybuilders and athletes have been experimenting with insulin since the 90's which is often dangerous or even deadly. The safe and healthy alternative is Alpha Lipoic Acid consumption with all carbohydrate dense meals. This dramatically increases the carbohydrate absorption shuttling all the nutrients with it directly into the muscle.

The balance of electrolytes in your body can be changed easily by sweating, vomiting and diarrhea.Typically electrolytes are severely depleted during intense exercise. Electrolytes and their importance to the human body is undeniable. The body functions and systems they support are vitally extensive. It is difficult for our bodies to survive without them. Cramping as well as muscle soreness is greatly associated with loss of electrolytes. Increasing electrolyte absorption post workout can aid in faster recovery as well as prevention of muscle strains or even tears do to dehydration.