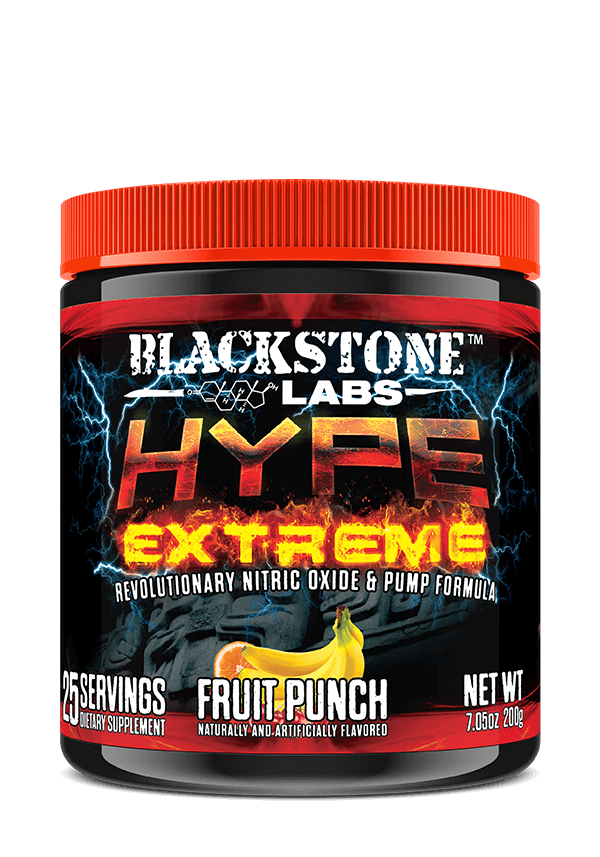 Blackstone Labs is back at it again. You already know that we are always working tirelessly on creating new formulas and making new, exciting, cutting-edge products.

Bodybuilders, fitness enthusiasts, gym rats, athletes, anyone with a general interest in lifting weights knows how good it feels to chase a seriously nasty pump. We even wrote an in-depth article on it.

We’ve had Hype available for a long time now to help you reach that Arnold Schwarzenegger-level of enthusiasm about getting into that pump climax down. It’s still a great product on its own and serves his own purpose, but we wanted to go deeper. As we began to spiral down deeper, we created something new entirely, as opposed to just giving Hype a facelift.

We are proud to introduce Hype Extreme, a completely new formula that is ready and able to pump you up. Rest assured that this isn’t just Hype 2: Electric Boogaloo. We began by replacing Hype original’s Glycerol monostearate with the trademarked, revolutionary pump agent Hydromax. It consists of 65% glycerol mixed with silica. This makes it 100% water-soluble. No more shaking your bottle into oblivion to remove those chalky chunks floating around. We have also gone ahead and double the dose of glycerol. This is what pulls water into your cells, creating that massive swelling effect. Bring on those skin-shredding, full-feeling pumps with each rep! It’s more than a feeling, too. It also causes your entire body to go into a state of hyperhydration, decreasing dehydration, which we all know can ruin any training session. A 2% occurrence of dehydration can decrease your overall performance by as much as 20%! Weak!

Nitrates have 100% bioavailability, which means 100% of what enters your body gets used and you lose nothing to digestion. Dietary nitrates (from beetroot) like this can increase plasma NO levels by 138%, as demonstrated by multiple studies done vs. a placebo. The 1.5g we have included in Hype Extreme has 10x more nitrates that beetroot! When absorbed by your body, it converts straight to NO2 and is absorbed very rapidly. This means vasodilation on a massive scale. Wider veins means high blood volume in your muscles, which is the essence of the pump!

Hype Extreme also boasts a bountiful dose of sodium nitrate. Instead of other substances that have to first convert to arginine before upping NO2, sodium nitrate is a direct source. No other company around gives you a colossal dose of 1.5g of NaNO3. This is similar to nitrates found in beetroot, but nearly 1,000 times the level of concentration. Think of it like a bucket versus a swimming pool of resources for your body to use.

The final key to the puzzle was the inclusion of nootropics to the formula. We always, always stress the importance of looking good and feeling good. With nootropics, you’ll get your pumps, but also so much more. We’re talking increased focus, performance, mental clarity, and heightened awareness. This is what people refer to when they talk about “getting in the zone.” This works by increasing oxygen flow to your brain, on top of raising acetylcholine levels, which is a neurotransmitter that improves cognitive function. Rhodiola Rosea is another nootropic that works to reduce fatigue and assist in raising cognitive function as well. To further aid this, and really the standout in this category, is Alpha GPC. Lauded as the Cadillac of choline sources, it converts to acetylcholine at an amazing rate. And to round out our nootropics, we have also added huperzine A, which prevents the breakdown of acetylcholine. This keeps you in the zone longer and enhances the effects as well. Go harder and longer for the best results imaginable.

Become the person you’ve always strived to be by exceeding all previous fitness goals. Get Hyped now!