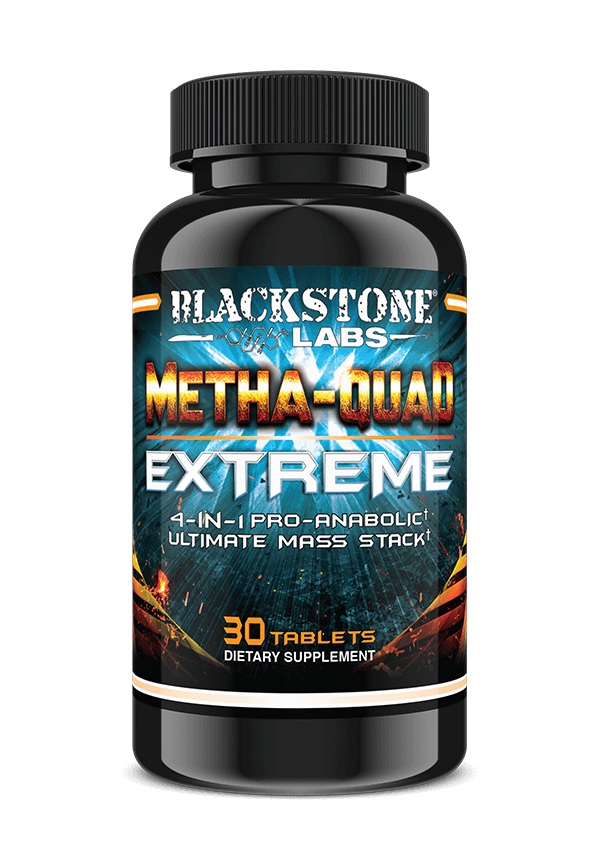 4-IN-1 PRO ANABOLIC WITH ANDROSTERONE

Introducing the most potent designer prohormone ever released.

Metha-Quad Extreme is the ultimate dream stack turned into reality. User should expect rapid increases in size and strength, yet dry gains without water retention. We put an industry-leading 150 mg of androsterone per pill in Metha-Quad Extreme—an ingredient never before sold by Blackstone Labs! Androsterone will etch density into the muscle resulting in a mature look to the physique. Plus offseaon pumps with contest prep vascularity. Even if you didn't know it, Metha-Quad Extreme is the product you have been waiting for from Blackstone Labs. Now it's here, and all the gains you want have been compressed into one single solitary liposomal tablet.

Taken alone, the four compounds in Metha-Quad Extreme are enough to produce great gains for most hardcore supplement users. Stacking two or even three of these ingredients will result in rapid physique enhancement, but when the four are combined a powerful phenomenon happens: The synergy between ingredients is unmatched, putting your body into overdrive and leaving it no other option but to grow, get stronger, and leave your competitors in the dust.

What makes this product even more exciting is that you’ll experience results compatible with whatever phase of diet or training you are in. If you’re deep into your offseason growth stage, Metha-Quad Extreme works perfectly, providing all the necessary hormonal amplification for huge jumps on the scale while adding more plates to the bar during your working sets. And if you’re in pre-contest mode (or simply a heavy cutting cycle), you won’t have to worry about losing muscle or strength. The drying and hardening effects of androsterone and arimistane in Metha-Quad Extreme won’t leave you with a blurry, bloated physique. Cut calories freely knowing that not only will your hard earned muscle be preserved, but you may even gain muscle despite being in a deficit.

It's not magic, it's Metha-Quad!