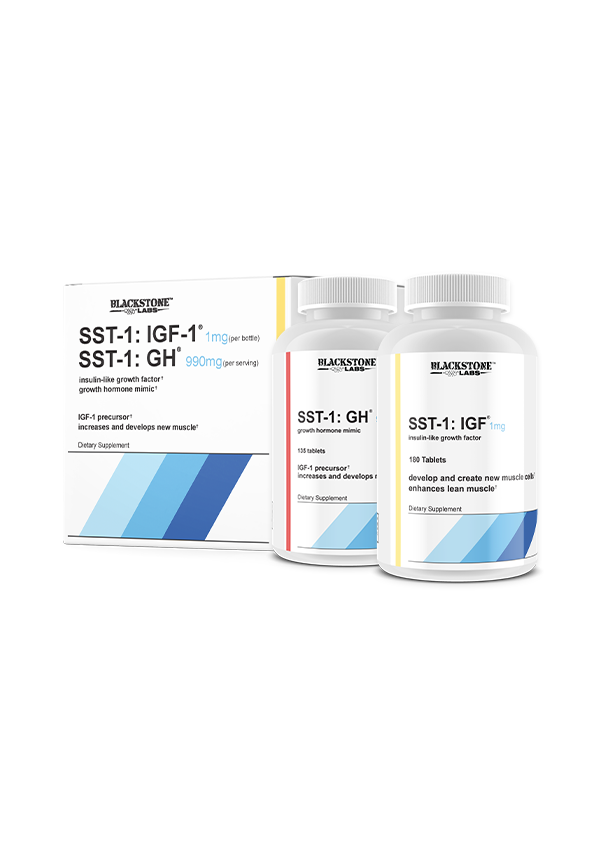 Real IGF-1 and its precursor

Real, pure IGF-1. With the successful extraction of insulin-like growth factor type 1 from whey protein, SST-1: IGF is a revolutionary discovery for all athletes. Blackstone Labs used a molecular biological technique to extract 175 ug/100g, which is a substantial amount of IGF-1. Blackstone Labs has found a way to make this revolutionary compound affordable with the development of efficient extraction methods from whey peptides for the production of IGF-1.

IGF-1 (Insulin Growth Factor-1) (from NPX-GF Whey Protein Isolate) (22.5mcg) Blackstone Labs, which is a company known for hardcore and innovative products, focused on the known growth factors in whey peptides, growth hormone (GH) and the insulin-like growth factors (IGFs). Blackstone Labs knew that new cells in the body occurs primarily through what is known as the GH/IGF axis wherein the presence of GH triggers and enhances the many effects of the IGFs. IGF-1, or insulin like growth factor-1, has also become popular with athletes as its aids in making an athlete bigger, faster and stronger. It may also boost muscle, reduce fat and improve endurance.

The most important factor to consider is IGF-1's ability to achieve hyperplasia. When you use performance enhancing ingredients, they will help the body through hypertrophy, which means you are increasing the size of the existing muscle cells. On the other hand, IGF-1 will cause hyperplasia, which means you are actually increasing the number of cells in the muscle tissue. These new cells can be utilized through further training to make bigger muscles. In essence, you will have the ability to achieve more muscle density and size at the genetic level by using IGF-1. Blackstone Labs takes a great invention (IGF-1 peptide derived from whey) and makes it a superior product (SST-1: IGF). Our proprietary in-house Liposomal Delivery (LD) system is an applied coating which allows IGF-1 to readily dissolve in liquids and ensures the IGF-1 will bypass digestion; will be transported through the bowel wall; will circulate throughout the body; will reach the organs and cells; and remain bioavailable at the cellular level. Liposomal Delivery makes IGF-1 (and other hormones and nutrients) up to 1,500 % more bioavailable. Without Liposomal Delivery, IGF-1 loses most of its effectiveness. The Liposomal Delivery difference means that products from Blackstone Labs do what they say.

Mucuna Pruriens Extract (seed) (Yielding 500mg L-Dopa per serving) (540mg) SST-1: GH is based primarily upon the active ingredient L-DOPA (also called Levodopa or L-DOPA) (L-3,4-dihydroxyphenylalanine). L-DOPA is extracted from mucuna pruriens or velvet bean seeds. It is the precursor of the neurotransmitter dopamine which itself is the precursor of neurotransmitters nor-epinephrine and epinephrine. DOPA is consumed to generate dopamine; supporting healthy mood and mental alertness. It has been known for over 40 years that L-DOPA is an effective stimulant of Human Growth Hormone (HGH) which has many benefits including improved sense of well being, increased muscle mass and protein synthesis, increased lean muscle, higher energy levels, increased endurance, increased flexibility, increased libido (sexual performance) and improved immune function. However, the challenges such as poor blood brain barrier penetration always caused the ingredient to only be marginally effective.

Blackstone Labs set out to utilize its Liposomal process it has used with its series of prohormones and has hit pay dirt! Our liposome-based strategy for effective ingredient delivery across the blood-brain barrier was especially effect in L-Dopa's case. L-DOPA is a naturally occurring non-protein amino acid, synthesized from L-tyrosine, and found in some foods and herbs. L-DOPA containing Mucuna pruriens cam also elevate human growth hormone as results of several studies. In one study it was confirmed to increase growth hormone release 60–110 min following a single oral dose of 500 mg of L-DOPA also confirmed that L-DOPA therapy, appears to elevate plasma growth hormone. Growth hormone (GH) is secreted by the anterior pituitary gland regulated by two hypothalamic peptides: GH-releasing hormone (GHRH), which stimulates GH synthesis and secretion, and somatostatin, which inhibits GH release without affecting GH synthesis. The major influence of GH is its anabolic effect on bodily tissues, including growth, cell reproduction and regeneration. As a result, GH plays an important role helping the body to adapt to heavy physical stress (eg, resistance training). The main physiologic functions of GH include increased protein synthesis, increased lipolysis, increased collagen synthesis, increased cartilage growth, decreased glycogen synthesis and glucose utilization, and enhanced immune cell function. However, levodopa cannot be administered alone, since it has multiple side effects and doesn't readily cross the blood brain barrier. Blackstone testers have all raved about the benefits they have gotten when taking SST-1: GH, which shows Blackstone has solved the age old question about how to make this powerful compound more effective.

SST-1: GH: As a dietary supplement, take three (3)) tablets prior to bedtime. Do not exceed recommended dosage.