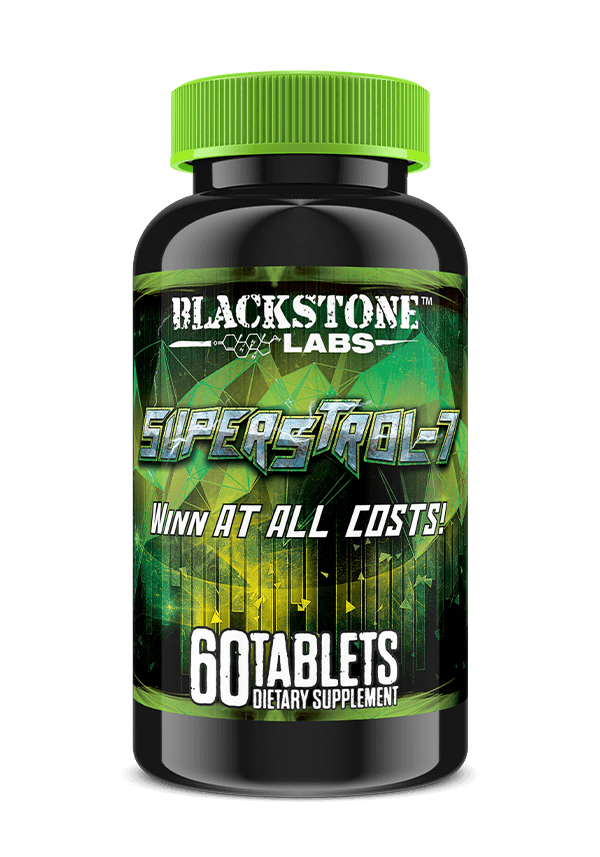 WINN at all costs!

SuperStrol-7 is the latest prohormone from Blackstone Labs. Androgenic and anabolic, SuperStrol-7 will provide lean and dry muscle growth for both men and women. Add this to product to any cycle to increase product results, athletic performance, and strength.

25mg 7-Hydroxy DHEA - A naturally occurring metabolite of DHEA, 7β-Hydroxy-DHEA is a weak anti-estrogen that cannot be converted into estrogen (unlike its parent, DHEA). In addition, it may have immunomodulatory effects and may also function as an anti-glucocorticoid (thereby opposing cortisol).

100mg Epiandrosterone - A metabolite of both testosterone and DHT, but one that can also be interconverted back into DHT (so it doubles as a precursor to DHT, just like its isomer, androsterone). Interestingly this hormone is actually more viable orally than when given parenterally, according to old, seminal Julius Vida data (this is also why it scores poorly in Vida). As mentioned above, it is difficult to estimate precise oral conversion rates to DHT because these conversions are reversible.

DHT, then, will confer most of epiandrosterone's desired effects. You're literally taking epiandrosterone in large part so it will convert to DHT (hence the name "prohormone" - DHT is the target hormone). DHT is more androgenic than testosterone and is more androgenic than anabolic. Any anabolic (i.e., muscle-building) effect in muscle tissues would be significantly weaker (~1/7th) than an equal amount of testosterone. That said, DHT (and other 5-alpha-reduced androgens) both cannot convert to estrogen and itself opposes estrogen (via inhibition of the aromatase enzyme). So epiandrosterone will reduce estrogen levels both directly in and of itself and indirectly (by converting to DHT).

Epiandrosterone also seems to confer benefit to the user via being a putative neurosteroid and even pheromone, with confirmed positive allosteric [i.e., enhancing] action on the GABA receptor. With stress-reducing, rewarding, pro-social, anti-depressant, anxiolytic, analgesic, neuroprotective, and pro-sexual effects, the GABA receptor’s ability to influence mood and overall well-being is well documented. Though the word "aggression" will often be used anecdotally, the GABA receptors actually run a bit counter to this. The furthest we would go would perhaps be assertive - but typically with an undercurrent of calm.

In our estimation, while epiandrosterone-only cycles may have a place for some users, this compound is best stacked with other hormones. DHT-related compounds seem to magnify the effect of testosterone and testosterone-like compounds - perhaps by opposing aromatase - far more potently.

50mg (25r)-5alpha-spirostan-2alpha, 3beta, 5alpha-triol-6-OH - This interesting compound has a documented 33:1 anabolic to androgenic ratio. It is the 6-keto derivative of diosgenin (6-keto-diosgenin). Like most 6-keto compounds, it may exhibit some ability to oppose estrogen. In addition, this natural phytosteroid has been shown to significantly enhance protein synthesis without any androgenic activity, which makes it valuable to both bodybuilders and strength athletes.

SuperStrol-7 Instructions: As a dietary supplement, take one (1) tablet two (2) times per day. Do not exceed two (2) tablets daily.