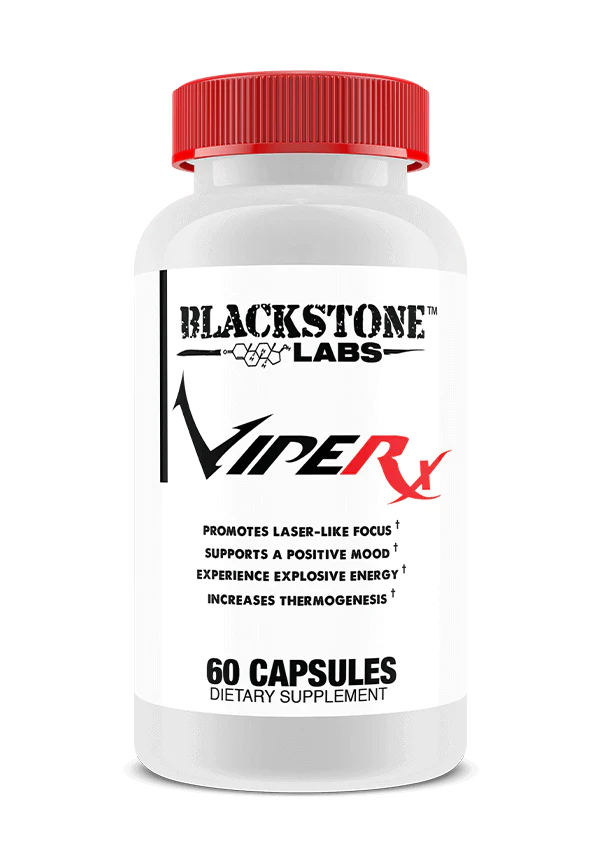 Are you ready for extreme fat loss?

Blackstone Labs Paraburn set the standard for powerful fat burners, but you demanded more, so Blackstone Labs set out to do unthinkable: improve on one of the most potent fat-shredding supplements ever created.

Countless hours of R&D and endless rounds of testing culminated with the debut of ViperX, an even more intense version of Blackstone Labs beloved thermogenic bringing greater fat burning, energy, and focus along with supreme mood enhancement. ViperX will have you burning fat faster than ever, while feeling better than ever!

Caffeine is well-known for its energy-boosting properties, but it’s also an extremely effective fat burning agent. Caffeine liberates stored fatty acids to be burned off for energy, laying the foundation for the other fat burning ingredients included in ViperX. Caffeine also helps fight the lethargy and “brain fog” that sets is while dieting, and it’s also a pretty effective appetite suppressant too, helping avoid those incessant hunger pangs that hit during dieting.

ViperX was one of the first fat burners on the market to include achyranthes aspera, a.k.a. “devil’s horsewhip.” This potent Ayurvedic herb enhances thyroid function and metabolism, boosting your calorie burn each every day. It’s also extremely useful for reducing blood sugar and appetite, as well as limiting fat and carbohydrate digestion in the body.

This ingredient is included to provide a profound elevation in mood and energy due to the “feel-good” PEA alkaloids contained in the plant, like n-phenethyl dimethylamine. Eria is similar to PEA in its mood-boosting properties, but due to its unique structure, promotes longer-lasting energy, focus, and mood than regular PEA.

One of the many alkaloids present in Citrus Aurantium, hordenine is a beta-2 adrenergic receptor agonist that ramps up the body’s natural fat burning abilities by stimulating norepinephrine release. It also functions as an MAO inhibitor, prolonging the effects of Eria Jarensis and promoting ultra-long lasting energy, focus, and mood enhancement.

ViperX contains even more long-lasting energy in the form of TeaCrine. Another xanthine-like molecule, TeaCrine is delivers prolonged energy and focus that comes without the tolerance build up of caffeine, meaning you get the same increased energy and mood without having to continually up the dose. TeaCrine also boosts dopamine production, reduces oxidative stress, and improves cognition, helping you avoid the mental fatigue that accompanies dieting.

Advantra Z is a trademarked extract of Citrus Aurantium (bitter orange) standardized to 30% synephrine. Advantra Z has been shown to increase lipolysis (breakdown of stored fats), suppress appetite and stimulate metabolism. Numerous research studies document its safety and efficacy as a potent thermogenic ingredient for fat loss and athletic performance.

A derivative of PEA, N-Methyl Tyramine stimulates release of norepinephrine, which helps keep your energy levels at an all-time high, even when your calorie intake is at an all-time low.

Patented form of black pepper extract included to enhance the bioavailability, absorption, and effectiveness of all the other fat burning, appetite-reducing supplements in ViperX.

As a dietary supplement: Assess your tolerance by consuming one (1) capsule in the A.M. with water and food for 3-5 days. After assessing tolerance you may consider adding an additional capsule in the early afternoon. Do not exceed two (2) capsules daily.