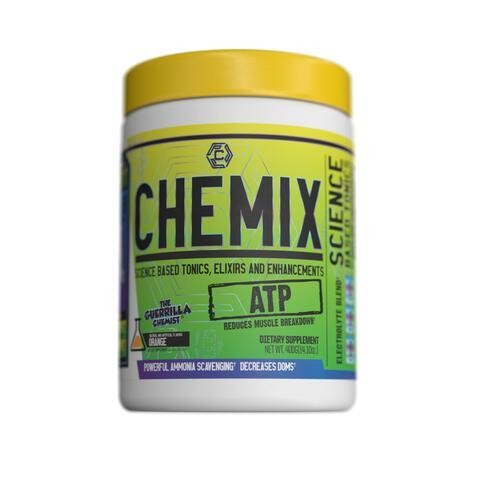 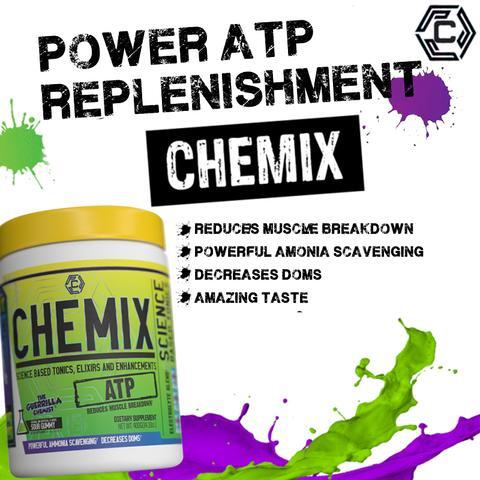 Chemix ATP is an ultra-premium, highly potent workout-enhancement product designed to increase your physical and mental endurance in the gym! ATP is a simple, yet extremely effective formula that contains 3 ingredients to help your body create more ATP(adenosine triphosphate), your body’s energy currency.

D-ribose is the sugar moiety that is part of all nucleotides such as DNA, RNA(it’s the “ribose” in deoxyribonucleic/ribonucleic acid) and more importantly ATP. D-ribose is critical for ATP re-synthesis, as it is the limiting-reagent for ATP synthesis. D-ribose is also responsible for making the enzyme cofactors NAD+ and FADH2+, which are crucial to cellular respiration during oxidative phosphorylation(the main source of ATP production in the body). Studies have shown that supplementing with D-ribose can replenish ATP levels to levels pre-exercising, as well as increase muscular strength and total work output. Subjects taking D-ribose for 4 weeks were able to perform almost 20% more reps vs the placebo! It was also shown to decrease DOMS, or delayed onset muscle soreness. Needless to say, D-ribose is crucial for training harder and longer in the gym.

The phosphocreatine energy system is also extremely important during exercise. Creatine gets phosphorylated(binds with inorganic phosphate), just like ADP and these are high-energy chemical bonds. When these bonds are broken, the result is a HUGE release of chemical energy. Creatine can also help create more ATP via transferring these phosphate molecules to ADP, ensuring you have plenty of energy for training hard. Most people don’t take creatine every day to saturate your muscles, so I included 5g of Creapure®, the purest form of creatine on the market. Perhaps the most interesting and unique ingredient in the formula is ornithine. Ornithine is an amino acid that is part of the urea cycle and helps dispose of ammonia via urea. Ammonia can build up during a workout from the breakdown of AMP(a byproduct of ATP) via a process known as oxidative deamination. This ammonia, which is now circulating in your body can increase the production of the inhibitory neurotransmitter GABA. High levels of GABA are critical for sleep, can yield mental and physical fatigue. A study involving the use of 6.2g of ornithine-aspartate(4g of ornithine HCl) showed to significantly lower circulating levels of ammonia. Authors of the study concluded that “the ornithine group displayed shorter multiple-choice reaction time at the end of strenuous exercise...” This means they were not as fatigued mentally after the workout. The ammonia(in blue) binds to bicarbonate anions(in red) to form carbamoyl phosphate, which then binds to ornithine to form citrulline. Citrulline eventually converts to arginine(which produces nitric oxide) and the ammonia is used to form urea and expelled from the body. The whole reaction is known as the urea cycle(see images below). Bottom line, ATP will allow you to push harder than ever before in the gym! The synergistic effect from these three well-studied ingredients will give you the physical and mental energy to train harder in the gym every day and allow you to recovery faster than ever. Say goodbye to DOMS and say hello to ATP!

Saks, V. A., et al. "Role of the creatine/phosphocreatine system in the regulation of mitochondrial respiration." Acta Physiologica Scandinavica 168.4 (2000): 635-641.

Kerksick, C., et al. "Effects of ribose supplementation prior to and during intense exercise on anaerobic capacity and metabolic markers." International journal of sport nutrition and exercise metabolism 15.6 (2005): 653-664.

Seifert, John G., Allison Brumet, and John A. St Cyr. "The influence of D-ribose ingestion and fitness level on performance and recovery." Journal of the International Society of Sports Nutrition 14.1 (2017): 1-6