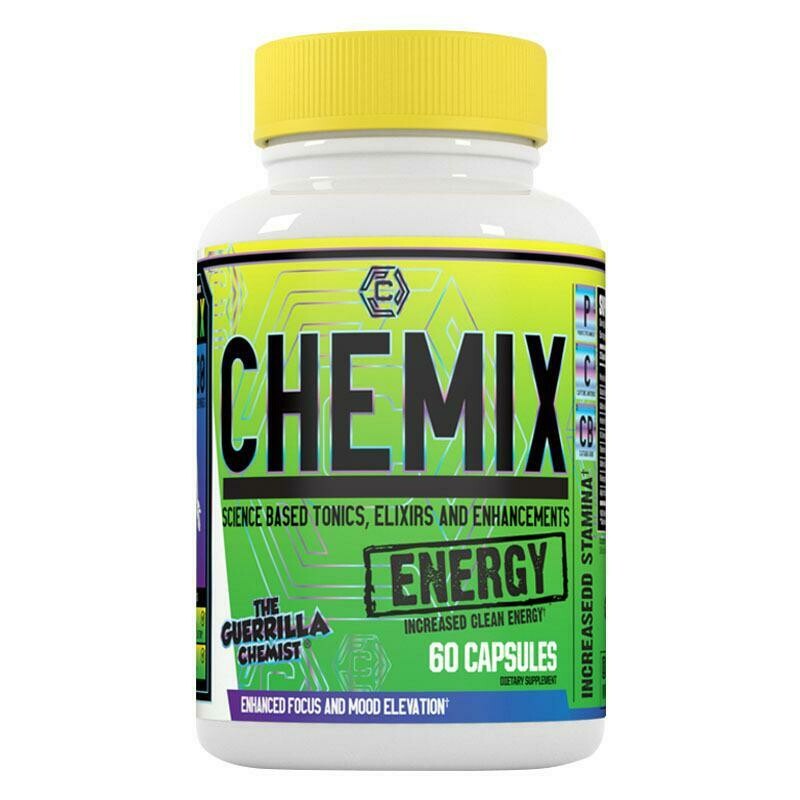 THE ULTIMATE ALL DAY ENERGY FORMULA

Chemix ENERGY is an ultra-premium, natural stimulant-based formula that gives users hours of endless energy. Whether it’s for the gym, work, gaming, or staying up, ENERGY combines 8 ingredients in efficacious and synergistic doses to make sure you are mentally firing on all cylinders. Each ingredient was chosen for a very specific purpose and dose to ensure that you get the maximum effect every time.

HOW DOES CHEMIX ENERGY WORK?

B-Phenylethylamine: Phenylethylamine, or more commonly known as PEA, is the chemical backbone structure for many natural and prescription central nervous stimulants. PEA is found naturally in a variety of botanicals including Leguminosae and even chocolate. Your body even synthesizes it via bacteria from the amino L-phenylalanine. PEA falls under the category of trace amines can help your body release dopamine and serotonin, 2 neurotransmitters responsible for “feeling good” and “pleasure” by binding to the Trace amine associated receptor(TAAR). It is here where it can inhinit the reuptake of dopamine, serotonin and norepinephrine. PEA is missing the alpha carbon that would 1)protect it from the enzyme that breaks it down Mono Amine oxidase, and 2)would make it the chemical structure of amphetamine. Many pharmaceuticals were modeled after PEA that aid in ADHD, depression and much more. PEA as a supplement hits you hard and hits you quickly. That’s why I front loaded ENERGY with 500mg of it for that initial euphoric and stimulant rush.

Catuabua Bark Extract(std to 30% polyphenols): Catuaba (Trichilium catigua) has been used in traditional Brazilian medicine for its antidepressant and memory-stimulant properties(as well as libido). Catuaba Bark works mostly on modulating dopamine, which users report improved mood, enhanced cognition and focus, as expected. Remember, dopamine is released and reuptake is blocked in medications for ADHD, so this makes sense. According to the research, Catuaba not only boosts dopamine release and inhibits its transport/reuptake, it also increases sensitivity of your D1 dopamine receptor. It’s also been shown to increase acetylcholine via acting as a mild acetylcholinesterase(enzyme that breaks down acetylcholine) inhibitor. Some research even suggests that it can increase the release and inhibit the reuptake of serotonin, as well. However, its mostly dopaminergic which is why it’s in this formula. It also has neuroprotective properties against oxidative stress. This compound is a superstar ingredient that not only will give you plenty of energy and dopamine, but focus, as well.

This formula contains a blend of caffeine anhydrous and citrate. Caffeine, a trimethylxanthine, in general is an adenosine antagonist meaning it blocks the sleepiness action of adenosine. This is what causes the alert feeling you get from caffeine. Caffeine citrate(approximately 51% caffeine) seems to hit more quickly vs its’ anhydrous counterpart, a very noticeable effect, however it has a much longer half-life compared to anhydrous. I am a big fan of the different time-releases of caffeine so it all doesn’t hit you at once. I purposely made the Nootropic caffeine-free so that one can add his/her own custom amount of caffeine. ENERGY has a total of 267mg of caffeine from the 2 sources, not to overwhelm the other stimulants inside this incredible formula.

Hordenine is often mislabeled as a stimulant based off its structure, but it’s actually a mono amine oxidase-B inhibitor. Commonly known as N,N-tyramine, one could see how it can be confused with a PEA derivative. However, as we spoke earlier about monoamine oxidase being the enzyme that breaks down PEA and monoamines like dopamine, serotonin and norepinephrine, it is important to include such a compounds in order to increase the duration and effect of these stimulants. Specifically, monoamine oxidase-B is responsible for prolonging dopamine, one of the monoamines that PEA and Catuabua Bark releases and blocks the reuptake of. Hordenine at this high of a dose (150mg) is able to extend the active life of PEA and Catuabua’s dopamine release. Most companies use hordenine completely incorrectly or at too low a dose to be effective. Not me.

One of the strongest PEA derivatives that is legally able to be used in supplements, N,N-dimethylphenylethylamine citrate has the PEA backbone but with one crucial difference: it contains gemini methyl groups in the Nitrogen atom of the amine group. This allows it to last longer in the body by sterically hindering the metabolism from monoamine oxidase. The other great thing about having 2 methyl groups attached to the amine is that it makes the compound much more lipophilic, meaning it can cross the blood-brain barrier much more easily vs PEA. This means that more of the compound will actually get to where it needs to be in order to release dopamine and give you a rush of energy. This will have a similar effect as PEA, but should last longer and hit slightly harder!

A newer stimulant to hit the market that is based-ff the ever popular synephrine stimulant, N-isoprpylnorsynephrine has an isopropyl group attached to the Nitrogen amine in order to make its effects last even longer. Synephrine is already a powerful stimulant, but like we spoke about earlier it can be quickly metabolized by our monoamine oxidase enzymes. Luckily, an isopropyl group is larger and more bulky compared to just 2 methyl groups, so only a very small amount Is needed to supply you with HOURS of energy! Synephrine also has the PEA background, and is very similar to tyramine, with only an hydroxyl group at the beta position. This allows for more tightly binding to your beta-2 adreno agonist receptors, the ones that BURN FAT. N-isopropylnorsynephrine also contains this hydroxyl group and has been shown to burn fat and stimulate your Beta-2 adreno receptors to the legal limit.

Last, but certainly not least, I added a very small amount(1mg) of alpha yohimbine. If you recall, alpha yohimbine binds to different subunits of the yohimbine receptor so that you do NOT get the jitters or anxiety that normal yohimbine can elicit. TRUST ME, I HATE regular yohimbine. But, I have found that a very small amount of alpha yohimbine can be very beneficial. It iis a very powerful alpha-2 adrenergic receptor antagonist, which causes the release of fatty acids into the bloodstream for energy. However, that’s not the only reason why it’s in ENERGY. Alpha yohimbine is also a strong central nervous system stimulant, as well as a monoamine oxidase-A inhibitor for norepinephrine. Norepinephrine is one of the body’s main catecholamines responsible for “fight or flight” and releasing fatty acids into your blood to be oxidized for energy. Prolonging the activity of norepinephrine can allow you to train harder or just have more energy throughout the day.