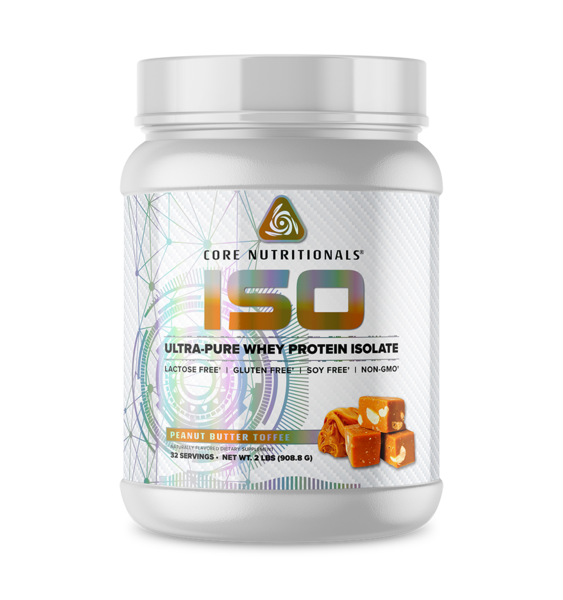 Your workout is the jungle. Whey isolate is the lion – its king.

Core ISO is, simply put, the pinnacle. Our protein’s quality, level of purity, and most importantly, gourmet taste, make drinking a shake your favorite and most effective part of your training day!

If the post-workout environment were a jungle, whey protein isolate (WPI) would be the lion – its king. Newer proteins enter into the market, receive fanfare and applause, and then inevitably fall out of favor. WPI, however, is the U.S. Dollar, Greenwich Mean Time, or Michael Jordan’s dunking prowess: it is the reference standard against which everything else is measured. The success or efficacy of all other proteins is gauged relative to what the one true king, WPI, has previously done.

So, given WPI’s long-standing Elvis status, there is simply no way it could be improved on. Right? Wrong. Amino-filled and/or spiked, low quality, low purity WPI formulas still run rampant on the market – robbing consumers of what they should be receiving, and exchanging the king for a jester.

That has never been Core’s approach, and it never will be. With Core ISO, we have developed the purest, highest-quality, least-adulterated WPI product on the market. We have taken the highest purity, non-instantiated, non-soy, non-GMO whey protein isolate available, and essentially added nothing to it: we have added no sugars, making it the perfect versatile protein; and we have added no artificial colors, meaning you can feel good about drinking it.

Did we mention we use natural flavoring? And Oh. My. Goodness, what flavoring it is! While the bitterness of WPI overcomes most brand’s offering, and results in a dull, palette-killing powder you need to choke down, Core ISO tastes like a gourmet pastry chef set up shop, on your tongue, and started making soufflés like nobody’s business.

Core ISO is, simply put, the pinnacle. Our protein’s quality and level of purity transcends it to the level of being a necessity; a part of your supplement and training setup that is simply assumed to be there, because it must be there. So, if you are already taking or planning to use protein, why not use the version of the standard that rises above the rest?

Whey protein isolate (WPI) was said above to be the king of proteins, but what does that mean? Why are proteins in general necessary, and more importantly, what are their functions as a workout supplement?

When you vigorously train or exert yourself, a process called protein degradation (the breakdown of muscle protein) begins so that the body can fuel itself. Think of this like shutting off your engine, in order to fuel your car (muscle protein breakdown). As this entire process plays out, the available pool of amino acids in skeletal muscle depletes, as they too, are drawn in and broken down in the natural, catabolic process during exercise training.

At this period, protein quality is also vital. Human skeletal muscle makes the most use out of a few, particular amino acids, and so a quality protein needs to have an amino acid profile that is optimal for this context. An, “optimal amino acid profile” contains a high amount of BCAAs, and in particular leucine, to counteract the rate of leucine oxidation that occurs as the fractional rate of protein synthesis decreases, and the rate of muscle protein degradation increases.

We chose whey protein isolate as the only protein in Core ISO for precisely these reasons. An excess amount in the available pool of amino acids (especially leucine) is called hyperaminoacidaemia, or specifically to leucine, leucinaemia. After a period of intense exercise training, we want this condition to arise immediately, peak after approximately one hour, and then be sustained until another protein source can be ingested. The evidence is quite clear that whey protein isolate not only achieves this, but also may achieve it at a greater potency as compared to other protein sources.

In a non-double blind study, two groups of healthy men received either micellar casein, or whey protein isolate, after a sustained bout of exercise training. Post-training, muscle protein synthesis, essential amino acid, and leucine levels were tested and compared. The study authors conclude that, “the ingestion of isolated whey protein supports greater rates of MPS than micellar casein both at rest and after resistance exercise in healthy elderly men. This result is probably related to a greater hyperaminoacidaemia or leucinaemia with whey ingestion.”

As we said above, it is critical for a protein’s effectiveness that it contain a robust amino acid profile, one that is particular high in leucine. This is because leucine is both the most physiologically important amino acid, with respect to muscle mass, and the most extensively studied. Data on leucine demonstrate this amino acid plays critical roles in stimulating skeletal muscle protein synthesis, and ribosomal biogenesis and assembly (the literal building of muscle tissue), along with playing a lesser role in insulin signaling and gluconeogenic processes. As a result of these diverse roles, leucine has been demonstrated to significantly stimulate skeletal muscle protein synthesis, and attenuate protein degradation, as in the above study, by both insulin-mediated and non-insulin mediated mechanisms.

In order to counteract a negative intramuscular protein balance, a number of things need to occur – mostly, a rapid increase in the availability of amino acids. There is strong evidence to suggest that, amongst protein supplement, WPI best achieves this feat.