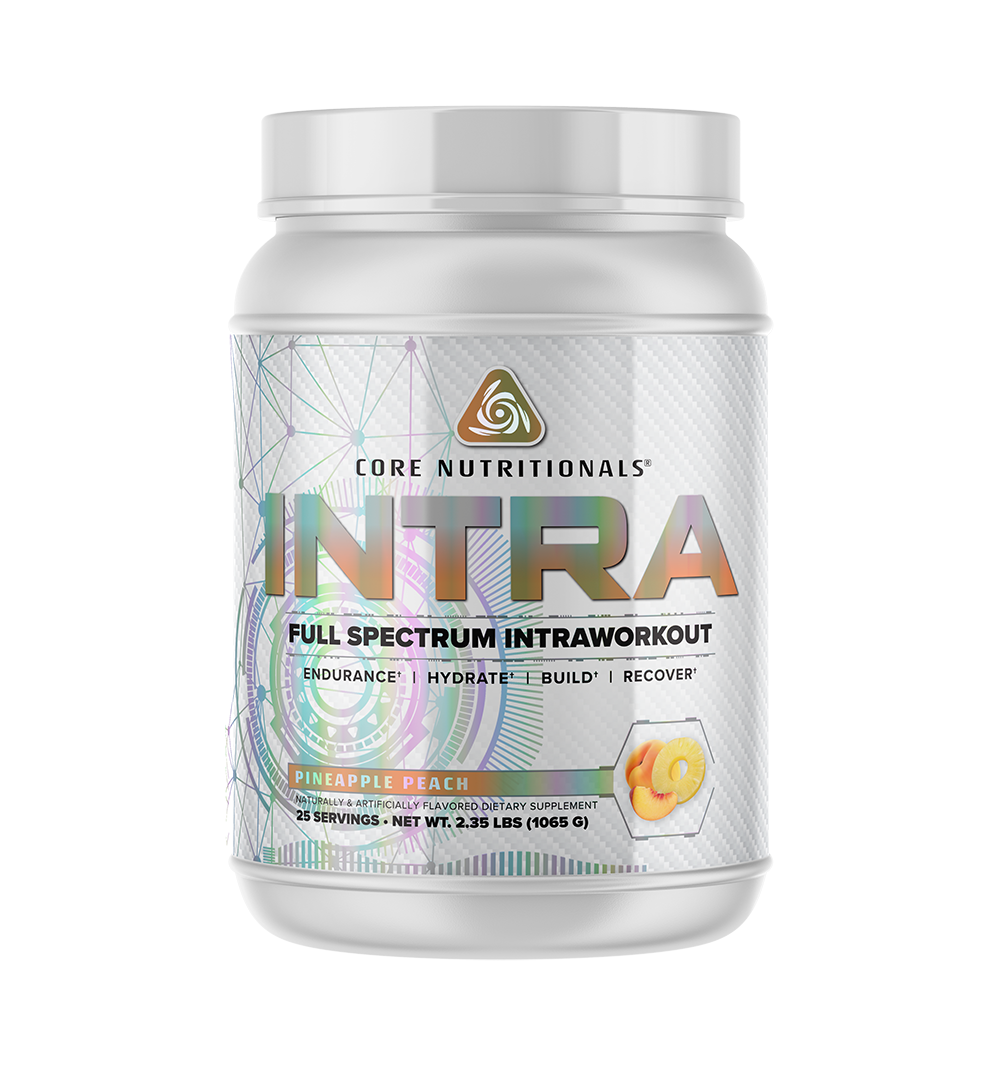 The fitness and supplement industries are in a constant state of change. We are learning more each day about how the human body works – and in the process, learning that positive adaptations in response to exercise are facilitated by proper nutrition. As a result, more research than ever is being conducted on the value – and specific protocols involved in – peri- or intra-workout nutrition and supplementation. Research is revealing that adequate intra-workout nutrition and supplementation can delay fatigue and increase endurance, facilitate muscle-specific anabolic response to exercise, reduce delayed onset muscle soreness and increase a wide-range of athletic performance metrics.

At Core Nutritionals, we’ve taken this research seriously and have distilled its results into the most complete and robust intra-workout supplement on the market – Core INTRA. Core INTRA contains a mxi of cutting-edge ingredients and longstanding pillars of supplementation to address most, if not all, major metabolic pathways associated with exercise. Core INTRA’s key ingredients have been demonstrated in scientific research to have a range of positive effects, including, but not limited to:

Essentially, this product is the intra-workout solution. No more need for mixing and matching, or simply dismissing the valuable role that intra-workout nutrition and supplementation plays. Now, in a single scoop, you have a complete solution – and one that tastes amazing, too!

One of the main goals post workout is to restore muscle glycogen that has been depleted during the workout. The body will even break down muscle tissue for this purpose if an adequate influx of glucose – obtained from the consumption of carbohydrates – is not provided. For this reason, it is vital to include carbohydrates in and around one’s workout.

Though opinion varies, the scientific literature is relatively clear that fast–digesting carbohydrates such as cyclic dextrin and dextrose create optimal conditions for the post-workout synthesis of both skeletal muscle protein and muscle glycogen. Not only have all three of Core INTRA’s carbohydrates sources demonstrated higher rates of post-exercise glycogenesis (glycogen resynthesis) as compared to other carbohydrate sources, they have also been shown to optimize insulin response and blunt cortisol release to a greater degree than other carbohydrate sources.

Cyclic Dextrin is considered one of the most beneficial carbohydrate sources in a performance context, due to its low osmolality leading to expedient stomach clearing and low bloating. Research conducted on top swimmers, swimming in a flowing water pool, confirmed that cyclic dextrin’s fast gastric emptying contributed to increased endurance (longer swim times). Swimmers provided a sports drink containing cyclic dextrin had approximately 50% longer swim time than swimmers provided a mixture of water and glucose only.

Dextrose functions at such a higher capacity because of molecular structure, given that it is otherwise known as pure glucose – your body’s preferred energy substrate and the necessary component for the synthesis and resynthesis of glycogen. Bypassing the lengthy and metabolically costly process of digestion and breakdown, dextrose can be absorbed directly through the gut into the bloodstream and can cause an insulin response faster than any other carb. Additionally, since dextrose is already in the form the body requires, it can be used immediately for glycogen replenishment.

In combination, the carbohydrates in Core INTRA, in their precise serving sizes, interact to form a comprehensive post-workout nutrition strategy:

The rapid, but very beneficial, influx of glucose from oral carbohydrate supplementation quickly suppresses cortisol and the negative effect it has on the expression of metabolically critical proteins and growth factors – ensuring that myocytes (muscle cells) function in an ideal environment. In addition, these carbohydrates induce a beneficial insulin response, the effects of which include stimulating glycogen storage, the transport of glucose into muscle cell mitochondria, and an increase in amino acid utilization.

If one were to think of the body as a construction project, amino acids would be the most basic building materials: raw lumber, mortar, bricks, and so on. While the assembly of these building blocks is of course critically important to the function of the building – and one of the amino acids, leucine, controls its own assembly – the quality and availability of the materials themselves is arguably more important. Not enough concrete? The foundation cracks and the building falls.

Your body is the exact same way. It is comprised of various amino acids, both essential and non-essential, that comprise the cellular basis of each cell in your body. When it comes down to skeletal muscle, the most important are the EAAs – or essential chained amino acids. Comprised of nine amino acids, these compounds effectively control the rate at which your muscle grows (hypertrophies), its contractile force, its endurance, and so on – to say they are massively important is an understatement. For this reason, they form the basis of any competently designed supplement protocol.

Leucine’s insulin-mediated effects are largely the result of its activation of the classical insulin receptor substrate (IRS)/phosphatidylinositol (PI) 3-kinase (PI3K)/Akt/mTOR signal transduction pathway. In this pathway, the bonding of a substrate (glucose) eventually activates a compound known as Akt. Once phosphorylated and activated, Akt signals the release of the famous mammalian target of rapamycin (mTOR). mTOR then increases the translation of muscle-cell ribosomal proteins that increase ribosome biogenesis, which is the literal production of proteins. Leucine has additionally been shown to positively regulate protein synthesis independent of insulin. In certain trials where rapamycin and leucine were co-administered, rapamycin showed only partial inhibition of leucine’s effects on muscle protein synthesis.

In more practical terms, there is a significant body of evidence demonstrating the positive effect of amino acids on athletic performance. Extensive studies in exercise-trained populations reveal that, collectively, amino acids may:

Carnosine is a bit of an odd duck: we know that it is crucial for muscle function, and that dietary sources of carnosine are essential, but we don’t know precisely how its working. Moreover, for decades, we had no idea how to increase intramuscular concentrations, as exogenous carnosine sources degraded in the body so fast as to be effectively useless.

Enter beta-alanine. Simply a different iteration of one of the amino acids that comprises carnosine itself (alanine), beta-alanine has proven to be the most effective means of significantly increasing intramuscular concentrations of carnosine – and therefore of promoting all of carnosine’s various beneficial effects on muscle performance. If that weren’t enough, beta-alanine has also demonstrated beneficial physiological effects independent of its parent compound. In order to understand why, though, we need to first understand some of the basic behind carnosine itself.

Carnosine, a cytoplasmic dipeptide synthesized from the precursors L-histidine and l-alanine, is present in high concentrations in skeletal muscle and plays a pivotal role as a, “chemical buffer” in myocytes (muscle cells). It has long been known that carnosine concentrations are highest in glycolytic, rather than oxidative muscle fibers (roughly speaking, explosive vs., endurance muscle fibers, respectively), and thus long hypothesized that this amino acid is required for sustained performance during supramaximal exercise. Recent research demonstrates that carnosine exerts its physiological effects in long hypoxic (low oxygen) drives by functioning as a high-capacity pH buffer in skeletal muscle, preventing the pH ratio of plasma from dropping too low – and therefore preventing crucial pH-dependent processes such as protein synthesis from being inhibited by acidosis.

In simpler language, this essentially means that beta-alanine is a dietary supplement that promotes its own effects in combination with exercise. As you exercise, you simultaneously intensify beta-alanine’s physiological actions – both directly, as well as in the production of intramuscular carnosine. Once ingested, beta-alanine’s exercise-specific beneficial activity is well-established. Elevation of intramuscular carnosine content via beta-alanine supplementation has been show to improve performance in the following ways:

These myriad benefits make beta-alanine both one of the most-studied, and most well-rounded dietary supplements. Beta-alanine not only has direct, actionable physiological effects, but also promotes critical muscle physiologic adaptations that promote its own effects.

Glycerol is a fascinating and highly useful compound that has achieved a somewhat cult status in the fitness community – while both peer-reviewed research and anecdotal reports centered on the endurance functions of glycerol are plentiful, its bodybuilding applications are not as widely lauded. Those who do use glycerol, however, are persistent in their belief that it provides some of the most noticeable, and effective, engorging (“pump”) effects possible.

Glycerol has been well-established as a so-called, “hyperhydrating agent” because of its ability to potently and positively affect plasma (blood) osmolality. As an incredibly powerful osmotic agent, and when combined with large quantities of water, glycerol induces the intracellular retention of fluid (not the extracellular kind, you do not want) that would otherwise be renally excreted. Various research has shown that glycerol’s capacity to positively affect osmolality and expand fluid volume (an increase in total body water) has beneficial effects on performance and physiologic function.

Studies that administered glycerol before both moderate and high endurance fitness tests found that glycerol reduced increases to core temperature, caused athletes to exercise significantly longer before fatigue, reduced urinary elimination of water and increased total body water content, and, in several studies, significantly improved intramuscular water expansion. In less complex terms, this means glycerol has been demonstrated to keep your muscles hydrated, significantly increase the ever-desired, “pump effect” of muscle engorgement, and, maybe most importantly when it comes to a supplement formulation, deliver and keep more nutrients where they are needed (inside the muscle).

Until recently, however, most of these studies noted a significant drawback: the low glycerol concentration of market-available glycerol products forced researchers to test glycerol loads that were significantly higher than average use cases. Core INTRA uses GlycerSize® to overcome precisely this problem.

GlycerSize® is a highly-concentrated (65%) form of glycerol that offers greater water stability, and therefore potency, as compared to standard GMS (glycerol monostearate). Of particular interest to bodybuilders, GlycerSize®’s greater potency translates to even greater levels of intramuscular water retention – keyword, intramuscular, and therefore no bloat – over GMS.

Overall, supplementation with GlycerSize® has been shown to:

Adenosine triphosphate and other ATP metabolites are involved in a number of biological processes including cardiac function, blood flow, muscle contraction and neurotransmission. ATP is the primary molecule that acts as a carrier for energy within cells. It has also often been studied that increased levels of ATP have shown increases in health and performance. Supplementation with exogenous ATP has often shown its ability to increase ATP concentrations in blood. Oral supplementation with ancient peat and apple extracts have exhibited their ability to increase intracellular and intramuscular ATP levels. ElevATP® is a blend these specific polyphenols that works to increase endogenous ATP levels without a simultaneous increase in serum lactate. The significance of this is that usually with an increase in endogenous ATP there is an increase in intracellular free radicals. When these free radicals are not present, oxidative stress is mitigated and there is more potential for the beneficial increases in ATP to take center stage. These increases of ATP are essential as when available energy is increased it can have positive benefits in terms of increased power, strength, and overall exercise performance. One study in particular looked at dosing ElevATP® against placebo and showed that the group who received ElevATP® saw a blood ATP increase of 45% on average along with no increase in oxidative blood glucose. This type of result has been shown repeatedly in studies and has given ElevATP® the reputation to be a beneficial compound for the goals of improving endurance, strength, power, and other training specific adaptations.