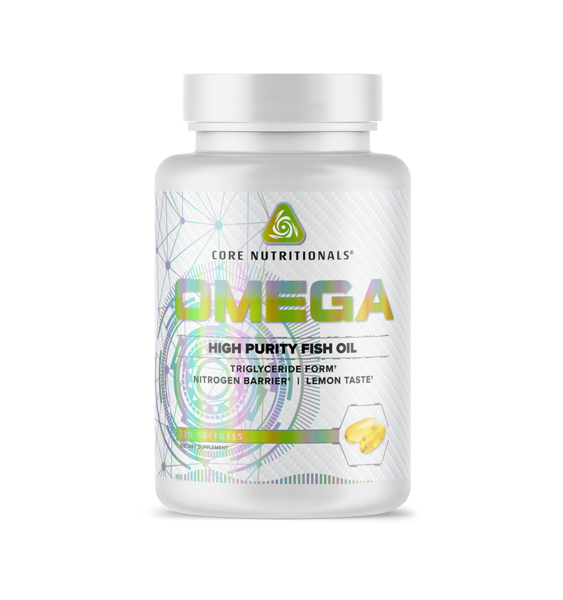 Core OMEGA contains high levels of the all-important DHA and EPA, with 480mg and 720mg respectively in each serving. Produced under a nitrogen barrier, this is the purest fish oil product possible.

When it comes to dietary supplement purchases, consumers are discerning and exact: the dose, form, extract, standardization and more must precisely conform to their standards. The brand matters, the compounds matter, and how those compounds are produced matters.

But when it comes to the basic supplements, the staples, most people have the attitude, “It’s all the same.” They travel to their local supplement store, browse quickly online, or grab whatever’s on the grocery store shelves and call it a day. Why? Shouldn’t the staples, something you are placing in your body everyday, be purchased with as much exactitude as the exotic stuff? And more importantly, shouldn’t the staples be produced with as much care and attention to specifics as the exotic stuff?

At Core, we think they should – and that’s why we’ve released Core OMEGA. Core OMEGA is a fish oil supplement, the Core way. What does that mean? Well, it means carefully selecting a fish oil manufacturer for our product that produces its fish oils under the all important nitrogen barrier – a manufacturing technique that greatly reduces the chance for oxidation, significantly expands the product’s effective shelf life, and all but eliminates any “fish” taste or smell from the oil. It also means ensuring that our fish oil product contains high levels of the all-important DHA and EPA, with 480mg and 720mg respectively in each serving. Lastly, it means using the purified triglyceride form, rather than the more common ethyl esters.

Oil derived from marine animals – commonly referred to as “fish oils” – are widely consumed for the high amounts of polyunsaturated fatty acids (such as DHA and EPA) that they contain and the potential health benefits that these fatty acids confer. Unfortunately, polyunsaturated fatty acids are notoriously unstable: they are composed of double-bonds between carbon atoms, a chemical structure that is notoriously susceptible to oxidation. (Oxidation is the process of producing oxygen species as a consequence of a compound’s exposure to oxygen.)

For fish oil, oxidation has a number of deleterious effects – principally, the production of hydroperoxides (the first step in oxidation) and secondary oxygen products not only produce the rancid, “fish” smell typically associated with lower quality fish oil products; but perhaps more importantly, in breaking the double bond structure of the fish oil, these oxygen species degrade the integrity of the product and thus reduce their potential health benefits. The oxidation degradation is unfortunately widespread. One study found that 50% of 171 fish oil supplements in Canada exceeded the limits for at least one measure of oxidation, and 39% exceeded the international voluntary safety recommendations for total oxidation (TOTOX value).” Another study found that approximately 29% of fish oil supplements in the United States similarly exceeded recommended values.

Luckily, research has shown that reducing the exposure of fish oils to oxygen and environmental factors (humidity and temperature fluctuations) during the production process can significantly mitigate oxidation. One of the most effective ways to reduce oxygen exposure is to blanket the oil, as soon as its processed and produced, in an inert gas such as argon or nitrogen – thereby preventing the fish oil from coming into contact with oxygen at all. While exact values will vary by product, research has shown that both primary oxidation (the production of hydroperoxides, measured in peroxide value, PV) and secondary oxidation (measured in TOTOX (total oxidation value) and a-nsidine values) are vastly reduced through a nitrogen blanket or barrier.

In sum, producing fish oils under a nitrogen blanket or barrier not only reduces the rancid smell typically associated with fish oil products; but vastly extends their shelf life and integrity.

We have established that how fish oils are produced may impact their viability as a dietary supplement. But the production process is not the only salient factor in fish oil efficacy and viability – the form that a fish oil takes is paramount, as well. Specifically, the differences between triglycerides and ethyl esters may be formative in how fish oils are absorbed and confer their potential health benefits.

First, a little primer on what triglycerides and ethyl esters are. Triglycerides are a molecular form common to almost all plant and animal species: a glycerol backbone with three fatty acids (in the case of fish oils, EPA and DHA) attached to them. For example, the “stuff” of human adipose (fat) tissue is triglycerides. Ethyl Esters, on the other hand, lack a glycerol backbone – they are a single fatty acid molecule attached to an ethanol molecule. Unlike triglycerides, ethyl esters are not a natural molecular form and formed solely through chemical synthesis.

While the difference between triglycerides and ethyl esters as applied to fish oil may seem academic, it in fact has profound implications for the absorption and bioavailability of these oils. In very condensed form, the issue is twofold: how the fish oil is taken up into the bloodstream (absorption) and how it is made available to cells once that has occurred (bioavailability). In both contexts, there is evidence that triglycerides are superior to the ethyl ester form.

For bioavailability, the issue is how the small intestine breaks down each form of fish oil. As a natural product, our bodies are intrinsically capable of breaking down triglycerides via bile salts and pancreatic lipase. Once ingested, pancreatic lipase and bile salts are released, and in the small intestine, the triglyceride is broken down into so-called emulsion droplets – which can then easily be broken up, detaching the two fatty acid molecules from the glycerol backbone. Not so with ethyl esters. Not only is pancreatic lipase (by some estimates) 50% less effective in breaking down ethyl esters; but once digested, ethyl esters must be converted into triglycerides through the liberated fatty acids attaching to a glycerol molecule. Essentially, your body must reverse the entire metabolism of ethyl esters, then go through the normal triglyceride metabolism.

Now that we know why producing fish oils under nitrogen barrier protects the integrity of fish oil, and why triglycerides are superior to ethyl esters, we have only one major question left: what benefits do fish oils (specifically, EPA and DHA) pose to humans?

Eicosapentaenoic acid (EPA) and cocosahexaenoic acid (DHA) have myriad health benefits, but their best-studied (and approved by the FDA) use is to balance and maintain healthy triglyceride levels. Triglycerides, as we mentioned, are produced naturally by most animals. They are necessary for a wide range of physiological function, but their overabundance is implicated in a number of pathological conditions. As a consequence, ingesting external forms of triglycerides – such as fish oils – can help balance triglycerides and maintain healthy levels. In perhaps the most robust meta-analysis to date, researchers examined 11 randomized human trials, comprised of 485 total individuals with a mean age of 25 to 49. The meta-analysis found robust evidence that DHA, specifically, exerts a significant triglyceride lowering and balancing effect. A similar meta-analysis focused on EPA found that its effects were comparable to DHA.

Both of these polyunsaturated fatty acids are best known for their triglyceride-lowering function, each exerts other interesting effects as well. Significant evidence suggests that EPA and DHA may mitigate the production of pro-inflammatory cytokines, molecules responsible for inducing the inflammation cascade in the body. Others studies suggest high levels of brain DHA are associated with verbal fluency and memory in healthy, normal adults – with one study finding that 6 months of DHA supplementation in young, healthy adults increased working memory assessed by recall.

One of fish oil’s (specifically, EPA’s) effects that may be of interest to fitness and physique athletes is its ability to induce AMPk (adenonsine monophosphoate kinase). AMPk, otherwise known as the “master metabolic switch,” is a heterotrimeric enzyme responsible for energy catabolism in muscle and fat cells. When activated, AMPk increases lipolytic (the catabolism of fat tissue) signaling as a means of energy provision. Several studies demonstrate that high levels of EPA indirectly stimulate AMPk activation via decreasing PPARy.

Though less well-studied or confirmed, emerging research suggests that DHA and EPA levels may be formative in maintaining healthy and normal moods, due to altering certain neurological proteins. These literature require follow-up and replication, but show promise in establishing a new purpose for DHA and EPA supplementation.