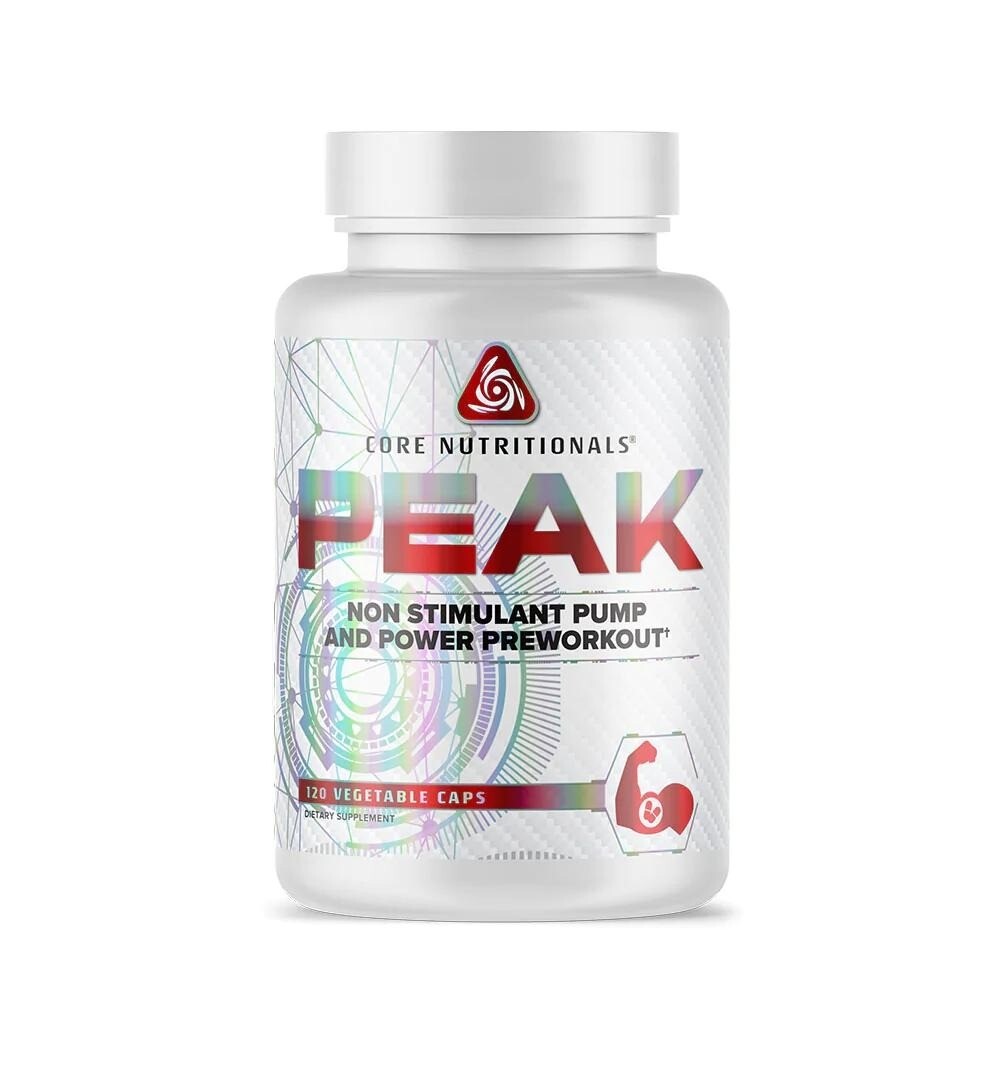 Rather than creating another formulaic and dogmatic pump product with limited benefits and questionable utility, we’ve taken our penchant for innovation and creativity to deliver a powerful stim-free pre-workout with a comprehensive, full-spectrum formula. Utilizing cutting-edge and trademarked ingredients, Core PEAK provides a highly effective pump product that optimizes performance, volumization and endurance without the use of stimulants or caffeine to eliminate unwanted side effects like sleep disruption, excessive caffeine intake or the jitters.

Why is this impressive? Well, the requirements for an outstanding a non-stim pre-workout or pump product within the supplement industry are relatively simple: increased pump and vascularity, enhanced blood flow and volumization, improved strength and endurance, and a refined sense of focus or mind-body connection. However, it’s not that straightforward after all. Countless pump products have tried to scale that mountain, only to find the task is insurmountable, and ultimately fail. Fortunately, our team at Core Nutritionals loves nothing more than a challenge.

But we won't stop at merely meeting the industry’s standard for a stim-free pre-workout product. Generally speaking, this means providing a singular benefit: increased localized blood flow, also known as vascularization or volumization. The issue is that there are legitimate concerns surrounding the efficacy and physiological benefits of such a limited supplement. That’s not an issue for Core Nutritionals, however, as our new pill-based non-stim preworkout, Core PEAK, will show you.

The formulation of Core PEAK promotes a unique form of localized blood flow, known as a performance pump, which is increased blood flow with a purpose. What is that purpose? PEAK utilizes multiple metabolic pathways to provide demonstrable and significant improvements to key markers known within the field of exercise physiology, including, but not limited to, total time to exhaustion, peak power, total work capacity, protein synthesis and muscle hypertrophy. This is accomplished through the inclusion of research-backed ingredients that not only enhance what’s referred to as the “pump effect” or increased volume and vascularity, but also exhibit noticeable improvements to key performance metrics.

Altogether, the brand new Core PEAK provides many of the benefits of a stim pre-workout without sacrificing on performance or overall utility. So grab yourself a bottle of Core PEAK today and start CRUSHING IT!

Nitric oxide (NO) is involved in many vascular and cellular functions as a signaling molecule for cellular respiration, vasodilation, and angiogenesis. NO is produced through both endogenous and exogenous pathways through dietary nitrate ingestion. Nitrates are converted to nitrite, which is then converted to nitric oxide. Found naturally in many foods such as leafy greens and beets, NO has a long history of scientific literature to back its potential effects as an ergogenic aid and other health-promoting effects. In terms of athletic performance, NO typically will make an impact through a few different mechanisms, such as:

However, when it comes to exercise and utilizing NO for its benefits in athletic performance, consuming whole foods is not always the most optimal form, so dietary supplemental forms of nitrates are often used to help provide this benefit. There are several forms of supplemental nitrates on the market today but for Core PEAK we are utilizing arginine nitrate (NO3-T®). Arginine nitrate is a salt that is synthesized from adding nitric acid to arginine. Arginine is classically utilized for its blood flow and vasodilation improving benefits and when combined with a nitrate, these benefits get exponentially elevated. As discussed above, the pathways with which NO is produced are of the importance. Pairing arginine with the patented nitrate (N03-T®) enhances nitric oxide production via the nitrate-nitrite pathway. Organic nitrate esters have a direct relaxant effect on vascular smooth muscles through non-nitric oxide synthase pathways, being directly converted first to nitrites and then to nitric oxide itself. (With attendant increases to guanylyl cyclase and then cyclic guanosine monophosphate (cGMP), which relax the vasculature.) Pairing both nitric oxide synthase and non-nitric oxide synthase-dependent mechanisms of actions theoretically enhances total NO production, given that rate-limiting enzymatic pathways in either mechanism do not determine total NO production.

In an absolute sense, both inorganic and organic nitrates also possess benefits beyond a secondary NO-production pathway. Studies in athletes have demonstrated that nitrate ingestion prior to both aerobic and anaerobic exercise meaningfully increases both delay to fatigue and total work capacity – likely a consequence of nitrate’s activation in hypoxic (oxygen-deprived tissues). Nitrate effectively reduces the oxygen cost of muscular activity, making contractions more efficient.

VasoDrive-AP® is a proprietary ingredient derived from fermented casein. The fermentation process produces two lactotripeptides, Valyl-Prolyl-Proline (VPP) and Isoleucyl-Prolyl-Proline (IPP). Based on the available clinical evidence, these tri-peptides work together to reduce angiotensin converting enzyme (ACE).

In a recent meta-analysis researchers found 30 studies – all of which were randomized and some of which were double-blind – wherein Valyl-Prolyl-Proline (VPP) and Isoleucyl-Prolyl-Proline (IPP), either alone or in combination, exerted a statistically significant effect on improving endothelial function. In one of the analyzed studies, 25 men were challenged with casein hydrolysate standardized for tri-peptides in a randomized and placebo-controlled design. At the conclusion of the study, forearm blood flow, a key measure of endothelial function, was found to be increased by 33%. The researchers in this and other studies demonstrate that the tri-peptides that constitute VasoDrive-AP® exert an inhibitory effect on ACE. ACE, in turn, is a critical component of the renin-angiotensin (RAS) system, which regulates hemodynamics by controlling plasma fluid volume. While the precise mechanism has not been elucidated, researchers believe that the lactotripeptides in VasoDrive-AP® competitively inhibit ACE, thus decreasing the metabolism of bradykinin and systematically dilating the arteries and veins.

Adenosine 5’-triphosphate (ATP) is the single most important molecule for our body’s cells. Every single cell in the human uses ATP as its primary source of energy for processes such as ion transport, muscle contraction, nerve impulse propagation, DNA/RNA synthesis, and chemical reactions withing the body. Our body stores ATP and can produce ATP through the presence of oxygen from cellular respiration, the breakdown of foods ingested, as well as under certain anerobic conditions. Maintaining high levels of ATP are essential to continuously perform at optimal levels both in a physical and physiological way. This is important because its not just about ATP availability but the timing and localization of ATP can be essential for the success of multiple physiological and metabolic actions. Knowing this, ingesting forms of ATP have been on the rise recently in the nutraceutical industry. Peak ATP® is a revolutionary innovation as a clinically validated and patented form of adenosine 5’-triphosphate disodium, which is the only nutritional ingredient that has an identical structure to the same ATP produced and utilized by the human body. Now for the common individual, ATP supplementation may not pose much of a benefit as their typical daily life and nutrition is likely sufficient, but for the individual engaged in heavy and intense physical activity and exercise the demand for ATP and useable energy at the ready is essential to performance and continuing to perform at a high level as well as recovering optimally. The demand for ATP in these cases can be increased up to 1000-fold during exercise and the rate at which ATP is broken down can limit performance.

Peak ATP® helps to provide this readily available form of ATP as a highly bioavailable form of useable energy that potentiates the role of ATP in the human body. In relation to exercise, this equates to allowing for the potential of athletes to do more and achieve more, with much less fatigue. Peak ATP® also has been shown to benefit athletic performance through enhancements in:

It’s a known subject that ATP is essential to the human body and its processes and maintaining high levels is of the utmost importance for optimal functioning. During increased energy needs these ATP pools naturally in the body can be depleted rather quickly, leading to less-than-optimal functioning and overall resulting factors. Peak ATP® has been shown to stimulate greater ATP production, decrease declines in ATP pools, and allow for greater energy usage potential. Peak ATP® can allow anyone get more out of their body by providing the needed energy to perform at a high level.

CitraPeak®, or glucosyl hesperidin, is a unique substance that contains all of the biological functions of standard hesperidin. Hesperidin is a flavonoid commonly found in citrus fruit peels. It has shown capabilities in a clinical setting of increasing nitric oxide production, which has the ability to improve circulation. One study demonstrated this through skin color restoration as a result of the increased blood flow and NO production as well as a mild increase in body temperature as a result. Both of these effects can be noteworthy of the vasodilatory actions taking place. CitraPeak® offers these benefits with increased solubility and bioavailability, making it one of the most effective forms of hesperidin there is.

The proposed mechanism of action for CitraPeak® and hesperidin is that it can acutely stimulate phosphorylation of Src, Akt, AMP kinase, and endothelial NO synthase to produce NO through the metabolism of hesperetin in the body. This increased NO production, while beneficial from a muscle performance standpoint, can also have a positive effect on other factors as well. Clinical studies have shown that hesperidin can increase flow mediated dilation and reduced concentrations of circulating inflammatory biomarkers, such as C-reactive protein, serum amyloid A protein, and soluble E-selectin. So, in addition to the exercise performance benefits that hesperidin can provide, it also has been shown to have positive vasculoprotective actions that can benefit the cardiovascular and circulatory system.