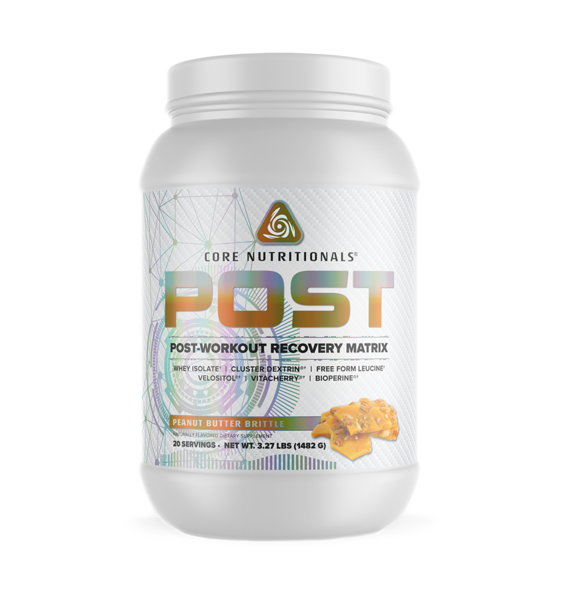 There are no secrets to recovery, but you can maximize it!

There are no secrets to recovery - no special tricks you can use. There are however, time-tested and critical components to growth, such as excellent post-workout nutrition, timed properly, in an effective delivery system. And to an end, there is the all new Core POST.

Our new matrix takes the premise behind the original Core PWO-combining fast-acting protein and carbohydrate sources-and improves on that idea in a massive way. We have the classic ingredients of cold-processed microfiltered whey protein isolate, pure dextrose, and Cluster Dextrin, a balanced-insulin response carb source with reducet bloat. Core POST also includes additional free from L-leucine and Velositol to further enhance protein synthesis. In addition to these, we have added Vitacherry to support optimal recovery, as well as Bioperine to enhance the efficient of the ingredients.

Together, our changes and these new ingredients have made the best post-workout recovery matrix even better.

It has been called the most important meal of the day, “the anabolic window”, and eating for anabolism. Whatever name you give it, the premise remains: post-workout nutrition is crucial to reaching your fitness and physique goals. Post-workout nutrition plays a number of critical anabolic (tissue building) functions, chief among them being the maximization of glycogen storage and protein synthesis, while simultaneously minimizing protein breakdown and the excessive release of catabolic (tissue destroying) hormones. Incomplete or insufficient post-workout nutrition isn’t a recipe that will likely yield a tasteful result.

This all raises the question: what is the ideal post workout nutrition? Is it common knowledge, or an industry secret? Maybe a certain ratio of carbohydrates to protein, or fat to protein; maybe the timing, frequency, and method of ingestion? Well, we are here to offer some clarifying insight. To be honest, the situation is vastly less complex, more well-known, and easier to implement than most would have you believe.

High quality, fast-digesting carbohydrates and protein have been shown time and again to induce the most optimal conditions for growth in clinical studies – and that is precisely what Core has attempted to emulate with Core POST. Core POST takes the guesswork out of post workout recovery, containing the fast-acting proteins and carbs (whey isolate, dextrose, and Cluster Dextrin®), along with other anabolic agents (free-form L-Leucine, Velositol®, VitaCherry®, and Bioperine®) needed to increase absorption in order to maximize muscle recovery after weight training. This combination of ingredients can quickly replenish muscle glycogen and shuttle much needed amino acids to muscle cells. Whether you are bulking up or slimming down, all of these ingredients are crucial for proper recovery.

As mentioned above, one of the main goals post workout is to restore muscle glycogen that has been depleted during the workout. The body will even break down muscle tissue for this purpose if an adequate influx of glucose – obtained from the consumption of carbohydrates – is not provided. For this reason, it is vital to include carbohydrates in the post-workout drink.

Though opinion varies, the scientific literature is relatively clear that fast–digesting carbohydrates such as dextrose and Cluster Dextrin® create optimal conditions for the post-workout synthesis of both skeletal muscle protein and muscle glycogen. Not only have both of Core POST’s carbohydrates sources demonstrated higher rates of post-exercise glycogenesis (glycogen resynthesis) as compared to other carbohydrate sources, they have also been shown to optimize insulin response and blunt cortisol release to a greater degree than other carbohydrate sources.

Dextrose functions at such a higher capacity because of molecular structure, given that it is otherwise known as pure glucose – your body’s preferred energy substrate and the necessary component for the synthesis and resynthesis of glycogen. Bypassing the lengthy and metabolically costly process of digestion and breakdown, dextrose can be absorbed directly through the gut into the bloodstream and can cause an insulin response faster than any other carb. Additionally, since dextrose is already in the form the body requires, it can be used immediately for glycogen replenishment.

In combination, the carbohydrates in Core POST, in their precise serving sizes, interact to form a comprehensive post-workout nutrition strategy:

Clinical research is clear that carbohydrates of this type, in combination with whey protein isolate, rapidly reverse high levels of cortisol and low levels of insulin that are associated with high intensity exercise. The rapid, but very beneficial, influx of glucose from oral carbohydrate supplementation quickly suppresses cortisol and the negative effect it has on the expression of metabolically critical proteins and growth factors – ensuring that myocytes (muscle cells) function in an ideal environment. In addition, these carbohydrates induce a beneficial insulin response, the effects of which include stimulating glycogen storage, the transport of glucose into muscle cell mitochondria, and an increase in amino acid utilization.

If the post-workout environment were a jungle, whey protein isolate would be the lion – its king. While it is difficult to overstate the critical role that post-exercise protein consumption plays in both a macro (body composition) and micro (small-scale, physiological changes) context, some ambiguity remains: what is the ideal form, frequency, timing, and amount of protein consumption post-exercise? Luckily for you, Core Nutritionals’ research hounds have crunched the numbers and read the studies for you, and the result is a very precise amount of whey protein isolate included in Core POST.

In a statement that should not surprise a single athlete or casual weightlifter, intense resistance training has a profound effect on the function and structure of skeletal muscle and muscle proteins. Immediately following an intense bout of resistance exercise, a process known as muscle protein breakdown – with its sidekick, leucine oxidation – begin to literally tear down your skeletal muscle from the inside. While resistance training simultaneously increases a process known as protein synthesis, the fractional synthesis rate (how quickly the protein is synthesized) is often far exceeded by the rate of muscle protein breakdown and leucine oxidation. The result is that, in that absence of mitigating factors such as post-workout nutrition, your body is in a state of negative protein balance – i.e., catabolism.

In order to counteract a negative intramuscular protein balance, a number of things need to occur – mostly, a rapid increase in the availability of amino acids, and the optimization of several metabolically critical hormones (such as insulin). The combination of protein and carbohydrates contained in Core POST achieves precisely this balance, and research on whey protein and dextrose in combination demonstrates that this combination maximizes the stimulation of muscle protein synthesis and results in even greater muscle anabolism than either alone.

Leucine’s insulin-mediated effects are largely the result of its activation of the classical insulin receptor substrate (IRS)/phosphatidylinositol (PI) 3-kinase (PI3K)/Akt/mTOR signal transduction pathway. In this pathway, the bonding of a substrate (Insulin activates a compound known as PI3K, which in turn activates, Akt. Once phosphorylated and activated, Akt signals the release of the famous mammalian target of rapamycin (mTOR). mTOR then increases the translation of muscle-cell ribosomal proteins that increase ribosome biogenesis, which is the literal production of proteins. Leucine plays a critical role in all of this, creating the translation initiation factors that are the rate-limiting step in the production of the ribosomes spoken about above. Carbohydrates alone, other essential amino acids, and non-essential amino acids have not been shown to have the stimulatory effects on muscle protein synthesis – leucine alone has, highlighting is primacy as a muscle protein activator. Leucine has additionally been shown to positively regulate protein synthesis independent of insulin. In certain trials where rapamycin and leucine were co-administered, rapamycin showed only partial inhibition of leucine’s effects on muscle protein synthesis. Rapamycin is also a critical component to the PI3K/Akt/mTOR pathway, as the mTOR (mammalian target of rapamycin) suggests. One of rapamycin’s primary functions is to inhibit mTOR. So, if leucine-mediate protein synthesis is only partially blocked by rapamycin, but rapamycin fully inhibits mTOR, this suggests that leucine-mediate protein synthesis is only partially dependent on the PI3K pathway.

Velositol®, a patented complex of amylopectin/chromium, is a fascinating compound – with emerging clinical data to suggest that it is effective in significantly enhancing skeletal muscle protein synthesis when combined with whey protein (vs whey alone).

In a double-blind crossover study, featuring 10 exercise-trained adults, researchers combined Velositol® with 6g of whey protein to measure what effects, if any, the compound would exert on skeletal muscle protein synthesis. (The control group consumed 6g of whey alone.) After collecting baseline muscle biopsies – to measure phenylalanine, a marker of muscle-building – the subjects performed eight reps of leg extensions. A final muscle biopsy was taken post-workout, to measure the changes in muscle protein synthesis between the study and control group.

The results were significant: the researchers found that muscle protein synthesis had nearly doubled in the Velositol® group, compared to the control. The researchers hypothesized that the mechanism of action of Velositol® is the stimulated uptake of leucine and other amino acids due to an influx of insulin (from the chromium).

While further study is warranted, the existing data on Velositol® suggests it’s a must-have addition to any recovery matrix.

Vitacherry®, comprised of Montmorency tart cherries, is a highly studied ingredient that has been shown to aid in muscle recovery as well as protect against post-exercise soreness and fatigue. Vitacherry® is filled with free radical fighting phytonutrients and compounds that work synergistically work together to reduce exercise induced inflammation. A 2016 study including 27 participants looked at the benefits of short-term supplementation with Montmorency tart cherries surrounding an endurance event showed positive results when it came to the benefits listed above. It was found was that supplementation in conjunction with a a vigorous exercise event had positive benefits towards:

BioPerine® is a patented standardized extract from the fruit of Piper nigrum (black pepper). ItsIt’s studied benefits have shown improvements in bioavailability of nutrients it is surrounded by. When it comes to post exercise nutrition, efficiency and speed with which nutrients can enter the system and get to their target is of the upmost importance. The “window of opportunity” is much larger than what has been previously thought, but when your results weigh heavily on post-exercise nutrition, maximal absorption and use of nutrients is extremely important.

Several studies looking at BioPerine®’s impact on nutrient absorption have been done. One study looking at the efficacy of BioPerine® on serum concentrations of curcumin showed bioavailability was improved by more than 500%. Therapeutic effectiveness of curcumin has often been exhibited as low. Another study conducted over the course of 6 weeks on BioPerine® influence on serum selenium levels in humans showed an increase by 145% over the presupplementation value.

With promising research being done on the effects of BioPerine® in the context of nutrient absorption and bioavailability, it is only fitting that we include it in Core POST, when post workout nutrition is King!