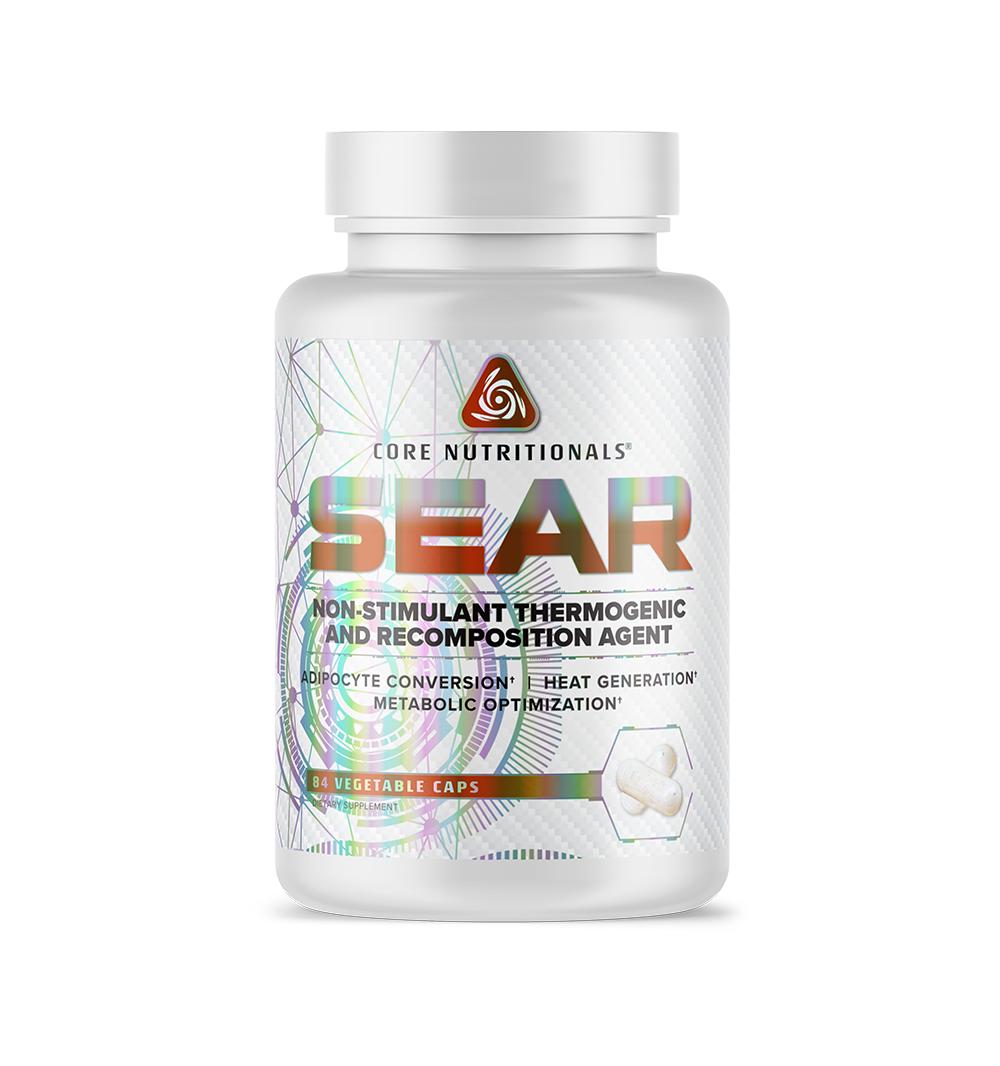 Why do we call it “burning fat”? It is a strange turn of phrase, as the body does not “burn” the adipose tissue (the technical name for “fat”). Of course, heat is involved in the base process of fat metabolism, hydrolysis, but the average person of course does not have this in mind. What the common phrasing captures is that the adipose tissue is now being used for fuel – burned up, as gasoline is burned up in a combustion engine as fuel for the vehicle. In this sense, the phrase “burning fat” captures something essential about the mechanisms of adipose metabolism. One mechanism of increasing this process overall is increasing the conversion of WAT (white adipose tissue) to BAT (brown adipose tissue) – known as the “browning” of fat.

It is precisely this mechanism that Core SEAR affects. There are many pathways to enhance lipolysis, the process by which stored triglycerides – the “stuff” of fat tissue – are broken down to release their potential energy into actual energy. One of the most effective is modulating the enzymes that interconvert WAT (white adipose tissue, which stores energy) to BAT (brown adipose tissue, which releases energy) and the chemical and enzymatic cascades that induce lipolysis. SEAR addresses both. Sinetrol XPur®, a blend of citrus fruit extracts, and MitoBurn™, a metabolite of L-valine, have been demonstrated to increase white-to-brown adipose tissue conversion and therefore the resultant energy expenditure increase. Meanwhile, Coleus forskholli and Paradoxine® have been shown to heavily influence cellular communication and enzymatic pathways involved in lipolysis, specifically the cAMP and AMPk pathways.

Together, this simple but incredibly powerful formula earns its name: searing white into brown adipose tissue and increasing your body’s energy expenditure due to fat metabolism.

Metabolism involves the chemical reactions that break down the foods we eat into separate compounds. Sugars, fats, and amino acids provide our body with energy to function on a daily basis. These compounds can help our body carry out many functions but when overconsumed they get stored as energy in specific adipose (fat) cells. These cells make up our fatty tissue and can further be classified as white adipose tissue (WAT) and brown adipose tissue (BAT). The color of brown fat is due to a larger number of mitochondria being present in those tissues. Mitochondria are the energy producing structures of the cells. Most of our body’s fat is WAT, which stores energy, and when to much WAT builds up the outcome is obesity. This can also be characterized as an enlargement in adipocyte size that results from increased triglyceride storage. Brown adipose tissue, or BAT, on the other hand breaks down blood sugar (glucose) and fat molecules into usable forms of energy, mainly to create heat and maintain body temperature (homeostasis). The ratio between these two adipose tissue types determines the level of energy expenditure, which is unbalanced in those who have more body fat. Research has been centered around finding optimal ways to tap into BAT’s ability to improve obesity, and other metabolic issues.

Sinetrol® is a unique blend of citrus polyphenols that are specifically meant to target body fat mass and improve long term body composition. These citrus polyphenols have been shown to enhance the physiological energetic pathways that influence lipolysis, destoring fat that has been accumulated within white adipose cells. This process occurs at the adipocyte level, helping to reach a balance between energy storage and usage, through a process of browning of adipocytes. Sinetrol® enhances the bodies physiological lipolysis process through phosphodiesterase (PDE) inhibition. This inhibition causes the rate of cyclic adenosine monophosphate (cAMP) to be maintained at sufficient levels, which is needed to enhance the baseline lipolysis yield. This process does two things. First, it can increase lipase activity, which is essential for breaking off fatty acids from triglycerides. Second, it can stimulate an increase in the number of mitochondria in your adipose tissue (mitochondrial myogenesis), thus giving your adipose tissue a brown color in appearance. In addition to this browning process, a protein called UPC-1 (uncoupling protein) is also increased. Studies have shown that it is through these primary mechanisms of action that Sinetrol® exhibits the benefit of enhancing lipolytic rate and browning of adipocytes, leading to increased thermogenesis and utilization of fatty acids and sugars as usable forms of energy.

In recent studies, MitoBurn™ (L-BAIBA), a metabolite of L-valine, has the ability to stimulate certain “exercise factors” that are released from skeletal muscle in response to muscular stress, in particular muscle contraction. L-BAIBA, a powerful myokine, plays a role in the benefits of regular exercise and begins a positive sequence of events, some of which include increased fatty acid oxidation, improved glucose uptake, and reduced fat mass. Although L-BAIBA primarily works to initiate the “browning” of adipose tissue, it also has been shown to decrease the “beiging” of adipose tissue. This beiging process is when the body reverses the preferred adipose tissue color of brown (high energy usage) back to white (high energy storage). Although most studies have been completed in rats, some results that have been obtained in cell culture models and human cohorts and shown a novel function to support L-BAIBA’s involvement in regulation of carbohydrate and lipid metabolism. These studies also support that L-BAIBA primarily exhibits its benefits in conjunction with physical activity. This is shown from skeletal muscle myokines (peptides) that play an important role is the processes listed above. These myokines are produced, expressed, and released by muscle fibers when under forceable contractions and exert both local and pleiotropic effects. Myokines also help to configure the immune-metabolic factor interactions and health promoting effects of physical exercise that stimulate the communication between skeletal muscle and adipose tissue. Adipose tissue itself will release proinflammatory cytokines in response to inactivity and can be a leading reason for the development of metabolic diseases.

This supported research of MitoBurn™ (L-BAIBA) and its benefits show that through its myokine activity and communication through physical activity as well as its ability to aid in the browning of adipose tissue, lead it to be a proposed beneficial intervention for the purposes of body composition improvements.

Coleus forskohlii is a small perennial endemic to various tropical regions in the world, including South America, sub-Saharan Africa, and India. While the West has recently taken interest in the plant due to the pharmacological properties of its primary bioactive, forskolin, Coleus forskholii preparations and tinctures have been used in both South American and African traditional folk medicinal systems, as well as extensively within Ayurveda. Due to the ever-increasing interest in the plant’s verifiable pharmacological and physiological effects, however, Coleus forksholii and its extracted constituents have been the subject of numerous animal and human clinical trials in the past decade. These trials have demonstrated the plant to have various effects and applications, including as a lipolytic and anti-lipogenic, and as a powerful antioxidant.

A recent double-blind, randomized, and placebo-controlled human clinical trial featuring obese men found that the daily implementation of Coleus forskholii, for twelve weeks, led to significantly better weight loss outcomes as compared to controls. Overweight men in the forskolin group experienced not only improved body composition (as measured by both body fat percentage and total fat mass), but also statistically significant increases in lean body mass. Coleus forskholii – and more specifically, forskolin – achieves this effect by rapidly, potently, and dose-dependently increasing an important metabolic enzyme known as adenylate cyclase. Adenylate cyclase is an enzyme responsible for catalyzing the formation of cyclic adenosine monophosphate (cAMP) from adenosine triphosphate (ATP). This increase in cAMP formation eventually leads to the activation of an enzyme, protein kinase A, which in turn will phosphorylate and hence activate the enzyme, Hormone Sensitive Lipase (HSL) – the rate-limiting enzyme necessary for stored triglycerides within adipocytes to be released as free fatty acids and utilized for energy. In more basic terms, this means that forskolin quite literally frees up more fatty acids to be used as fuel for exercise – more or less the perfect scenario in a product such as Core SHRED!

Aframomum melegueta, more commonly known as Grains of Paradise, or the alligator pepper, is a plant in the Ginger (Zingiberaceae) family. While complete compositional analysis has not been performed on Grains of Paradise, preliminary assays demonstrate is structural and chemical similarity to ginger – principally in that both ginger and grains of paradise contains a range of pungent bioactives, one of which is 6-paradol. 6-paradol acts as a lock and key mechanism to work along side the mechanisms of action of the other ingredients found in Core Sear.

Paradoxine® specifically is an ethanol extract of Grains of Paradise. Studies have shown that this extract can increase energy expenditure through its browning of fat tissue (similar to Sinetrol® and Mitoburn™).

Also, along with 6-shogaol, 6-paradol appears to be the most bioactive of the approximately 14 pungent compounds identified in ginger. Both compounds appear to potently and dose-dependently mediate the PI3K (phosphoinositide 3-kinase)/PKB (protein kinase B), leading specifically to an increase in AMPk phosphorylation. Known as the ‘master regulatory switch,’ AMPk is responsible for balancing endergonic (energy absorbing) and exogenic (energy liberating) processes in the body’s response to energy demands. AMPk is therefore heavily involved in adipocyte (fat cell) differentiation, proliferation, and hypertrophy, via regulating both enzymatic action (11B-HSD1, HSL, SREBP-1) and downstream lipogenic genes such as PPARy2.

In the case of gingerols such as 6-paradol, increased phosphorylation of AMPk in adipocytes appears to have a mitigating effect on hypertrophy by reducing lipid synthesis. 6-paradol appears to increase AMPk, which in turn decreases the mRNA expression of the downstream PPARy2 (peroxisome proliferate activated receptor gamma 2), a nuclear receptor gene principally responsible for lipid accumulation. In other words, the gingerols control a compound (AMPk) which, in turn, controls fat mass metabolism.