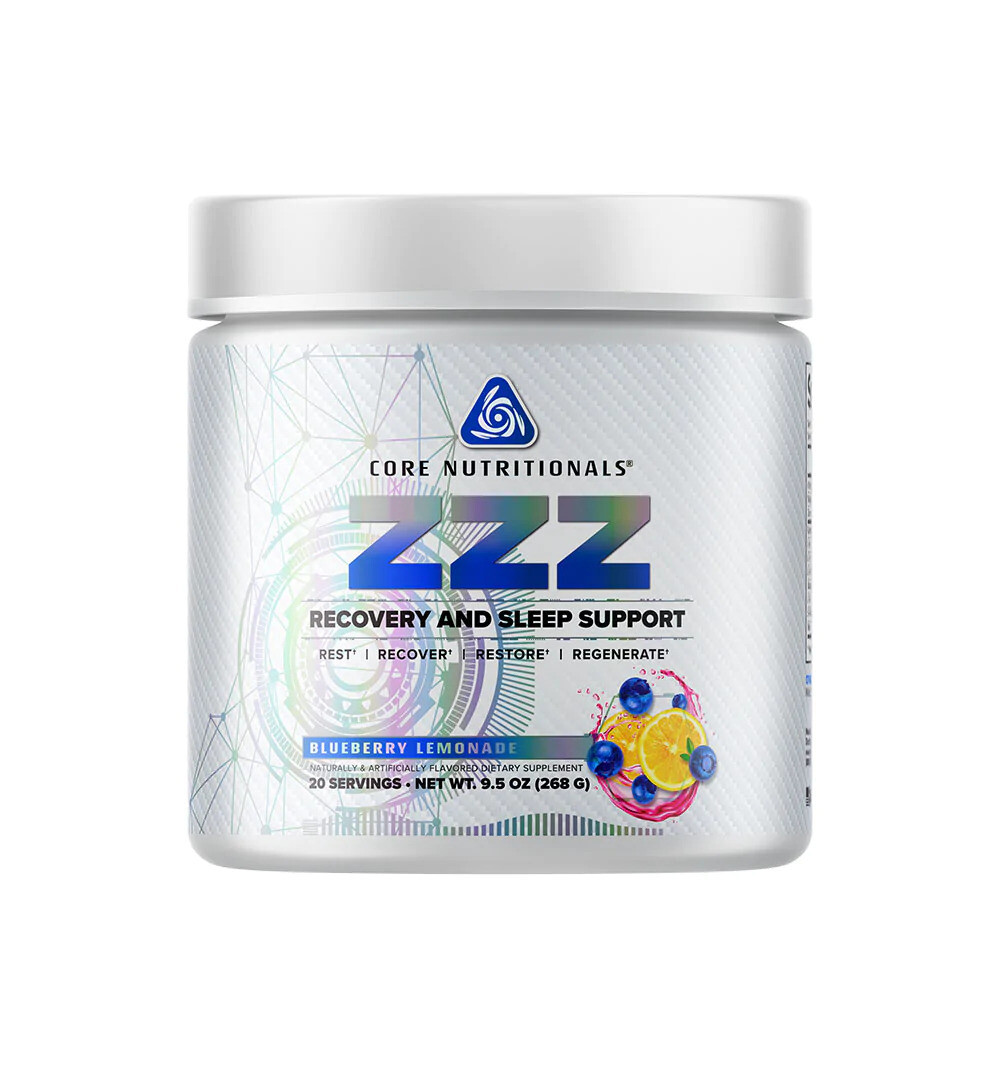 Put recovery at the top of your list by putting Core ZZZ at the center of your supplement lineup.

Core ZZZ contains only the most effective recovery agents, in clinical servings, to effectively target multiple pathways for recovery and sleep support. Get Core ZZZ and get your ZZZ's.

You know the feeling: the weights feel heavy, the treadmill feels painfully slow, and every minute you’re looking up at the clock wondering when the workout is going to be over. Why? It’s not your diet – your food journal is so detailed it makes engineers blush. It’s not your supplementation – you are using the entire Core lineup like every smart trainer does. Ah, that’s right. Last night was a brutal mashup of tossing and turning set to the tune of your spouse’s snoring and the neighbor’s dog barking.

If recovery is the key to success, then say “hello” to the locksmith. Core ZZZ is a perfectly-designed product with a single goal in mind: maximizing your recovery. We have included only the best and most effective recovery agents, at the proper serving sizes, to take the guesswork out of a good night’s rest. We have also specifically chosen these ingredients for the pathways they target, ensuring that every possible physiological pathway for recovery is covered.

No more tossing nights and no more wasted workouts – put recovery at the top of your list by putting Core ZZZ at the center of your supplement lineup.

Mineral blend (Vitamin B-6 (as Pyridoxine HCL), Magnesium (as Magnesium aspartate), and Zinc (as Zinc monomethionine))

Sleep is important, but sleep is not important for its own sake. Rather, we sleep because of the collection of physiological processes that it enables: the repair of tissue, the biosynthesis and release of hormones, and so on. While each of the individual ingredients in our mineral blend is important in this regard, the formulation as a whole has previously been demonstrated to have tangible physiological effects.

In a randomized, double-blind, placebo-controlled study, 27 NCAA football players consumed a supplement containing Vitamin B-6, Magnesium, and Zinc, or placebo, for an 8-week period. Measurements for free testosterone, IGF-1, and muscle strength and power were taken at the conclusion of the study. The authors found statistically significant increases to all measured indices, with a particularly high spike in free testosterone as compared to placebo.

GABA, known technically as, γ-Aminobutyric acid, is a potent depressive and the chief inhibitory neurotransmitter in the human brain. As GABA plays a critical role in the sedative and depressive functions of the brain, GABA receptor subtypes – principally GABAA – have been positively associated with the regulation of the sleep-wake cycle.

Given its pivotal status in the regulation of sedation and sleep, both GABA itself as well as GABA agonists (GABAergics) have been researched for their capacity to modulate sleep and mood. A 1996 animal model study established that stimulation of the GABAA receptor-subtype through exogenous GABA intake led an increase in the length of slow-wave sleep. A further 2006 study found that increasing plasma levels of GABA through supplementation was associated with regulation of the posterior hypothalamus “sleep-wake switch,” a physiological mechanism used to control sleep in mammals.

In addition to GABA’s potential role in the regulation of sleep itself, additional research has uncovered that GABA may potentiate certain benefits of deep sleep – namely, the increase in plasma growth hormone. The first study to demonstrate GABA’s growth-hormone potentiating effect was a 1980 study in 19 healthy subjects. This placebo-controlled trial found that a 5 gram serving of GABA significantly increased plasma levels of growth hormone as compared to controls. A further study in 2008 demonstrated similar results, with 50% increases in plasma levels of certain growth hormone isoforms in response to GABA administration in healthy subjects.

Glycine is a non-essential amino acid, so-called because the human body is capable of synthesizing glycine from sources internal to the body (serine). Like many other amino acids, glycine possesses physiological effects independent of its function as a ‘building block’ to protein. In glycine’s case, its physiological effects stem from its role as a neurotransmitter in the human brain.

Three methodologically-sound studies have investigated glycine’s effect on sleep and sleep quality in humans – and each used the same serving size as that found in Core ZZZ, 3 grams. In studies conducted in 2006 and 2007, ingestion of 3 grams of glycine prior to sleep was found to have both subjective and objective positive effects on sleep. Subjectively, participants reported more satisfactory sleep, less daytime sleepiness, and improved cognitive function. Objectively, PSG measurements revealed less latency to sleep onset and deep sleep. These results were confirmed in a more recent 2012 study which focused principally on glycine-dependent improvements to daytime cognitive function in sleep-deprived volunteers.

Overall, these human trials suggest a possible role for glycine in the regulation of beneficial sleep cycles at a serving size of 3 grams.

Tryptophan is an essential amino acid, and one of the most critical in the human body. Tryptophan is critical because it is the biological precursor to both serotonin (one of the body’s principal neurotransmitters regulating mood, appetite, and sleep) and niacin (a vitamin and a crucial biological intermediate).

Among dietary supplements or ingredients purported to regulate the sleep-wake cycle, tryptophan is perhaps the most well-studied. The body of literature pertaining to tryptophan’s sedative effects is vast and varied, reaching back at least 40 years and featuring hundreds of articles. Despite the enormity of this body of literature, and therefore potential for disagreement or conflicting data, scientific consensus exists that tryptophan exerts positive effects on the regulation of the sleep wake cycle in humans – evinced by placebo-controlled trials in humans.

One such placebo-controlled, double-blind trial involved 10 healthy volunteers ingesting either 1.2 grams or 2.4 grams of tryptophan prior to sleep. Blood and urine measurements were taken at regular intervals, and sleep was measured both objectively (latency to sleep) and subjectively using the Stanford Sleepiness scale. Both serving sizes of tryptophan were highly correlated with a significant reduction in sleep latency and significant improvements to subjective sleep quality on the Stanford Sleepiness Scale.

Results such as this have been reproduced in dozens of clinical trials involving healthy/normal and sleep-disturbed subjects, men and women, younger and older participants, and featuring serving sizes as low as 500mg and high as 15 grams. These studies nearly universally reflect that exogenous tryptophan supplementation is positively correlated with an improvement in sleep quality and an objective reduction in sleep latency – with the best effects resultant from a 1 gram to 1.5 gram serving size.

Serotonin has often been at the center of the discussion in the regulation of sleep. This “feel good” hormone has been shown to be essential in many physiological functions including circadian rhythm, thermoregulation, cognition, and nociception. When serotonin levels are low, it is critical to find ways to restore balance. Supplementation, to help with recovery and sleep, can be beneficial in reducing stress and restoring this balance. 5-HTP (5-hydroxytryptophan) is a natural chemical compound that has been shown to benefit certain aspects of health, including mental function and sleep quality as it is a natural precursor to serotonin in the brain. 5-HTP passes the blood brain barrier easily, making it very efficient in its action. 5-HTP, when combined with other nutrients such as GABA, may be effective at decreasing time required to fall asleep and improving sleep quality and duration.

Ornithine is a non-protein amino acid, meaning that, unlike most other amino acids, it is not involved in the production of proteins and is not encoded by DNA. In humans, ornithine is most commonly associated with the urea cycle, though recent research has revealed a potential role for ornithine in the regulation of sleep and arousal.

Though data on ornithine is not extensive, recent research has demonstrated that it may play a role in both objective and subjective assessments of sleep quality in humans. In a double-blind, placebo-controlled, randomized trial, 400mg or placebo was administered to 52 healthy adults experiencing mild fatigue. Ornithine was consumed consecutively for 8 weeks, with measurements for cortisol being collected – along with both subjective and objective measures of sleep quality.

At the conclusion of the trial, most participants experienced both subjective and objective improvements to the quality of their sleep. The researchers also noted that ornithine supplementation resulted in a small but statistically significant reduction to plasma concentrations of cortisol.

Mucuna pruriens is a hanging or climbing plant endemic to India and sub-Saharan Africa. The plant has been used extensively in the Indian traditional medicinal system known as Ayurveda for a number of purposes, including virility and gastrointestinal disorders.

In the context of recovery, data is limited but promising. In a 2012 study, 18 healthy men and women with impaired sleeping were given a supplement containing Velvet Bean (MP) for 28 days. At the conclusion of the study, the participants completed the well-regarded and industry-standard Pittsburgh Quality Sleep Index.

The authors note that supplementation with the Velvet bean-containing product improved the reported scores in every category of the PQSI. Many categories saw improvements of over 50%. Moreover, the authors noted both that Velvet Bean, not the other ingredient in the studied supplement, was the bioactive compound responsible for these effects, and that Velvet Bean has been demonstrated to improve GH release during sleep in other independent trials.

Melatonin is a hormone produced in the body by the pineal gland through a biosynthetic process beginning with tryptophan and ending with the conversion of serotonin to melatonin. Melatonin’s functions are regulated by a combination of norepinephrine and ultra-violet radiation. Once produced and released, melatonin helps control the body’s circadian rhythms and a number of other physiological processes.

As a dietary supplement, melatonin has been studied in a number of research populations with a wide-range of physiological conditions, as well as in healthy normal subjects. While studies in temporary behavioral modalities (jet lag, shift work) have proved inconclusive, clinical trials in populations with disturbed sleep had more promising results.

A 2004 review found that, while the intensity and specific effect depended on the population, melatonin generally improved either onset to sleep time or sleep efficiency. Onset to sleep is the time required before the participant has entered into unconscious sleep, while sleep efficiency is a measurement of the total time spent asleep in a given period.

This same review concluded that, while more research is necessary, melatonin is an intriguing possibility as an over-the-counter sleep facilitator.

Though not essential to consume, L-theanine nevertheless has a number of intriguing physiological effects in humans – principally, its function as a non-sedative relaxation agent. In practical terms, this means that L-theanine has been shown to produce the benefits of relaxation (reduction in stress perception), without the drawbacks of sedation (a feeling of drowsiness or sleepiness).

L-theanine’s most promising role, however, may not be an independent one, but rather its interaction with caffeine. Several studies have shown that L-theanine may play a role in enhancing many of caffeine’s positive characteristics, while attenuating often reported side-effects of over-stimulation.

In a clinical trial involving either 150mg caffeine in isolation, or in combination with 250mg L-theanine, the L-theanine group not only saw improvements to reaction time and alertness ratings, but additionally saw a reduction in the amount of self-reported headaches. This result has been replicated in additional studies, while still further studies have found the addition of L-theanine to result in enhanced attention – producing less of the common “over-stimulated” effect of caffeine, wherein stimulation may result in distracted focus.