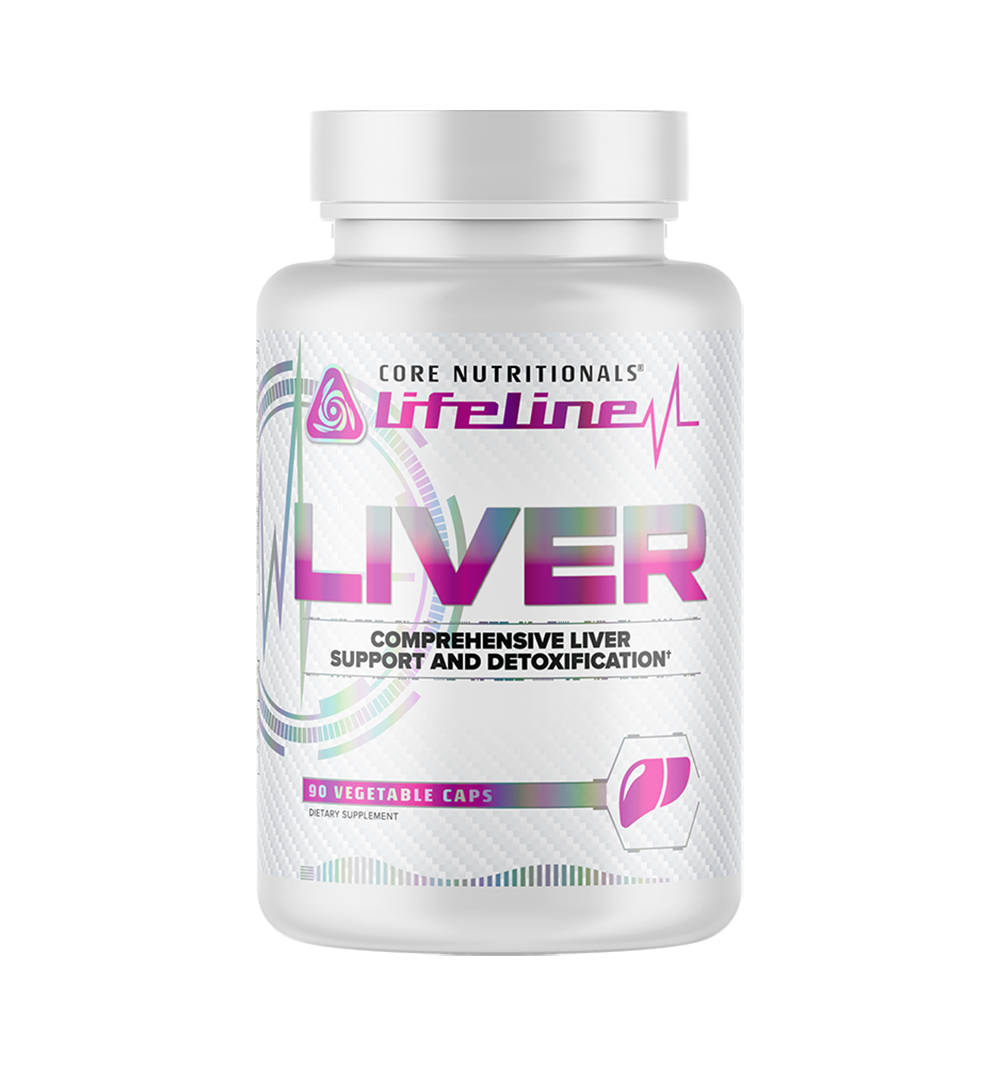 For many athletes, the liver isn’t the first thing that comes to mind when they think about optimizing their gains and recovery. Yet the liver has an undeniable impact on your overall health and fitness. Its actions aid in the filtering of harmful substances from the blood, production of proteins that carry hormones, drugs and fatty acids throughout the body, creates bile to breakdown fats, and stores glycogen, vitamins and other minerals for use in everyday processes. Conversely, the consistently elevated levels of muscle damage, excessive protein intake and stimulant use typical for your average weightlifter places additional stresses on the liver, leading to increased oxidative stress, liver damage and elevated markers of liver function.

This dynamic opposition, where liver function is essential for overall fitness and growth while the very processes involved in body recomposition can cause damage and reduce function, requires an effective remedy to aid with short term fitness goals, as well as long term liver health and function. Enter Core LIVER - our comprehensive liver support and detoxification supplement.

With overall liver health and function in mind, we scoured the available clinical research studies to formulate a liver supplement provides remedial support and protection through multiple metabolic pathways and mechanisms. Overall, this formula helps to provide protection against free radicals and liver damage, enhances liver function, and aids in detoxification. Don’t neglect your liver health or Core LIVER and keep living the Crush It lifestyle.

Silybum marianum, also known as milk thistle, is a medicinal thistle from the aster or daisy family that has been used in traditional medicines for many centuries for treatment of many different diseases. Many of these treatments have been to protect the liver and associated organs from damage/further damage. There is evidence to support that milk thistle, and specifically the silymarin compound that is found within it, exhibits a mechanism of action for hepatoprotection from free radicals through antioxidant activity, enhanced protein synthesis, and possible anti-inflammatory or immunomodulating effects. These free radicals are generated through the damage to cellular membranes called lipoperoxidation. Additionally, silymarin also enhances liver glutathione production through the inhibition of hepatocyte glutathione reduction. This can further contribute to the antioxidant support and defense for the liver. Several studies have shown improvements in liver function in individuals with certain liver diseases leading to these proposed benefits. In one in vitro human study in particular, silymarin was shown to inhibit T-cell proliferation and proinflammatory cytokine secretion in a dose-dependent manner. Higher doses of silymarin were shown to specifically control hepatic inflammation responses in chronic liver diseases. It is important to note that in relation to liver diseases, milk thistle has been studied as a complimentary treatment method to traditional treatments and that it is important to live a healthy lifestyle to prevent these diseases as much as possible.

Katuki, known by its botanical name Picorrhiza kurroa, comes from the Scrophulariaceae family. Picorrhiza, coming from the Greek word ‘Picroz’, means ‘bitter’ and ‘rhiza’ meaning ‘root’. This bitter quality is what katuki has been touted for its therapeutic benefits and is said to be cooling, cleansing, and possess anti-bacterial properties. Katuki has been shown to possess potent hepatoprotective and hepatostimulative properties to offer support to the overall function of the vital liver organ. Katuki offers support by stimulating the secretion of bile, which assists the liver enzymes in coming back to homeostasis. Additionally, katuki contains a compound called picroliv, or kutkin. This compound is mainly a glucoside (derived from glucose and most commonly found in plants) and is normally isolated from the roots and rhizomes of Picorrhiza kurroa for the uses to treat certain liver ailments. In rodents, picroliv has shown efficacy that can be similar to silymarin in models that have shown hepatic damage. As mentioned above, silymarin is a highly effective compound used in the controlling of hepatic inflammation which can lead to hepatic trauma. When chronic oxidative stress, toxins, and free radicals that can wreak havoc on the liver can be controlled, the function of the liver can be enhanced, thus creating a cascading sequence of related optimally functioning actions. Some of these actions include:

Glutathione is an amino acid containing molecule of L-glutamic acid, L-cysteine, and Glycine that is particularly concentrated in the liver. The liver has a unique ability to synthesize cysteine, a glutathione precursor, from endogenous sources through the trans-sulphuration pathway or through protein breakdown and food. It is vital to many different properties and is best known for being a powerful antioxidant. It also plays a key role in the detoxification reactions in the liver and in regulation of the thiol-disulfide status of hepatocytes. The ‘glutathione system’ comprises the enzymes that synthesize glutathione within a cell as dedicated enzymes that use glutathione for its antioxidant effects. Glutathione supplementation is thought to support this pool of glutathione present in cells and thus maintain the efficacy of the entire system. This supplementation can be even more important if chronic disease is seen as “drying up” this pool of antioxidant rich compounds. Free radicals and toxins can be a byproduct of many different things such as exercising or poor physical health, eating, and daily unhealthy lifestyle activities to name a few. When these molecules overcome the body at the cellular level, this constant barrage can have negative impacts on health and overall wellness. This overabundance of oxidative stress can contribute to pathogenesis of many liver diseases, as well as exacerbate preexisting conditions. Setria® L-Glutathione provides a potent supply of antioxidants that bind these free radicals, which can help keep them from causing lasting damage. There have been some conflicting reports on whether oral glutathione supplementation was a viable way of increasing serum glutathione levels as opposed to intravenous methods. One long-term, randomized, placebo-controlled study on the effects of oral glutathione supplementation showed that dosages as low as 250mg of Setria® Glutathione were able to:

This study, as well as others, shows that supplementation of glutathione and precursors to glutathione can be a reliable compliment to traditional therapies for many hepatic and hepatic related conditions.

TUDCA gets its acronym as being the taurine conjugate of ursodeoxycholic acid (UDCA), a secondary bile acid that is produced only by intestinal bacteria. UDCA was originally FDA approved for the treatment of certain cholestatic liver diseases based on its ability to protect hepatocytes (liver cells) from hydrophobic bile acids. Cholestasis occurs when bile acids get backed up in the liver and there is room for metabolism. These bile salts can be damaging to the cell membranes of nearby tissues, in particular liver tissues, and can begin to signal for cell death (apoptosis). TUDCA works through a mechanism of action that shows its ability to inhibit liver cell apoptosis by interfering with the mitochondrial pathway of cell death, inhibit oxygen-radical production, and reduce endoplasmic reticulum stress. The endoplasmic reticulum acts as a highway between the nucleus of a cell and the cytoplasm and is heavily involved in protein and lipid synthesis. Through this reduction in ER stress, TUDCA has garnered a reputation as being a beneficial remedy for a wide range or metabolic diseases, and for being a neurological protection agent. Although TUDCA has been shown to possess wide ranges of benefits, its most common and practical use has continually been seen in the ability to provide protection and overall health for the liver.

Several studies have looked at the effectiveness of supplemental tributyrin on the benefits of gut health and have shown promising results. One animal study combining tributyrin with essential oils concluded that this combination improved the intestinal morphological structure and positively altered the intestinal microbiota and metabolites that benefit gut health. Another animal study analyzing parameters for growth as it pertains to performance of the gut microbiota concluded that, with the addition of tributyrin, there was an enhanced potential for energy metabolism and indicated that tributyrin can promote changes in the gut microbial communities. These positive changes seen can contribute to improving animal performance after weaning from an infant diet to an adult diet.

Several human studies have also looked at tributyrin’s positive role on the body. Most of these studies have involved tumors of some sort, but this does provide promise to the potential benefits it can have when tumors are not present as increases in immunoprotection can beneficial for everyone. One human study showed that tributyrin was able to be cytostatic to cancer cells and induce differentiation and apoptosis (cell death) to colon cancer cells through the stimulation of interleukin-2 and -12 (2 cytokine signaling molecules in the immune system).

While more studies can be beneficial for solidifying tributyrin’s benefits on gut health, these current studies do show its ability to provide immunoprotection and boost the overall function of the vital gut microbiome. CoreBiome® has been clinically proven to be a highly bioavailable source of this vital nutrient.

BioPerine® is a patented standardized extract from the fruit of Piper nigrum (black pepper). It’s studied benefits have continually shown improvements in bioavailability of nutrients it is surrounded by. When it comes to post exercise nutrition, efficiency and speed with which nutrients can enter the system and get to their target is of the upmost importance. The “window of opportunity” is much larger than what has been previously thought, but when your results weigh heavily on post-exercise nutrition, maximal absorption and use of nutrients is extremely important.

Several studies looking at BioPerine®’s impact on oxidative stress have been performed. One study conducted on rats in 2013 looked at the influence of piperine on rats with developed disorders such as hypertension, increased inflammatory markers, and increased plasma liver enzymes after being fed a high carbohydrate and high fat diet. The results showed that after 16 weeks of supplementation with piperine these rats experienced normalized blood pressure, improved glucose tolerance, reduced markers of oxidative stress and inflammation, and improved liver function.

With more promising research being done on the effects of BioPerine® in the context of nutrient absorption, bioavailability, and its influence on certain health markers, it is only fitting that we include it in Core Life Line’s Liver support product.