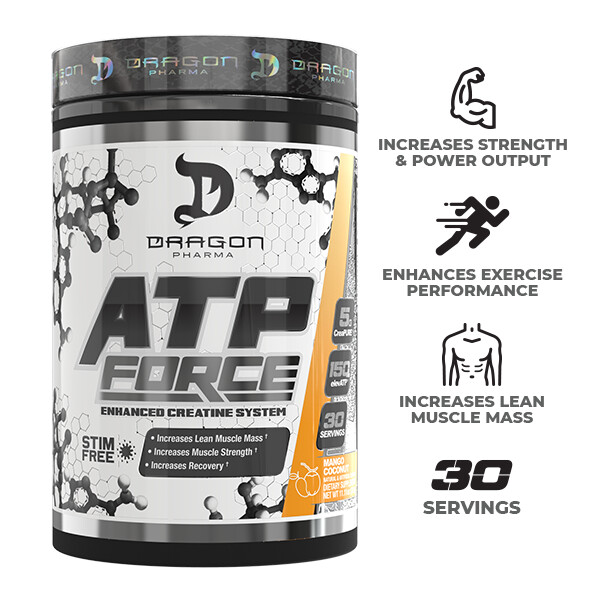 During intense exercise, muscle contraction is powered by ATP (Adenosine-Triphosphate), but there is only enough ATP to provide energy for a short period of time. Dragon Pharma ATP-FORCE was designed to maximally increase and replenish cellular ATP production and provide more cellular energy, allowing the body to train harder, leading to increased lean muscle and faster recovery.

ATP-FORCE’s ENHANCED CREATINE SYSTEM contains clinical dosages of CreaPure®, elevATP®, taurine, and betaine to enhance lean muscle mass, amplify strength and to be a dominant force every time you step into the gym or on the field.

ATP-FORCE features 5g of CreaPure® which is regarded as the “elite gold standard for quality and purity” when it comes to creatine. It is a micronized form of creatine which has better solubility and absorption potential than lower grade creatine monohydrates. It’s generally recommended that taking 5 grams of creatine per day is sufficient for increases in muscle mass and strength.

elevATP® is a clinically researched combination of a water extract of “ancient peat” (fossilized plants) and apple extract that works with our natural energy-producing mechanisms to stimulate the production of ATP. The rich stores of trace minerals and polyphenols in certain plant extracts have long been associated with improvements in blood flow and the creation of ATP, the body’s primary source of energy.

Creatine Monohydrate is the GOAT (Greatest of All Time) sports supplements with more than 1,000 studies to validate its efficacy. Creatine is taken up from the blood into the cell membrane by means of a sodium-dependent creatine transporter. The majority of creatine is found in skeletal muscle (~95%). Creatine increases physical performance in successive bursts of short- term, high-intensity exercise. Creatine is produced from dietary sources, but consuming enough creatine from dietary sources can be challenging such as 1 pound of uncooked beef and salmon provides about 1–2 g of creatine.

Creatine supplementation can enhance the phosphocreatine stores found in muscle by 30-40%; this increase has been shown by research to greatly improve an athlete’s ability to withstand fatigue. In addition to being able to train harder, creatine monohydrate may reduce muscle damage and/or enhance recovery from intense exercise. For example, one study evaluated the effects of creatine supplementation on muscle recovery and muscle damage following intense training. They reported that participants supplemented with creatine had significantly greater muscle strength during recovery from exercise-induced muscle damage. Additionally, plasma creatine kinase (i.e. a marker of muscle damage) levels were significantly lower (−84%) after 2, three, four, and seven days of recovery in the creatine supplemented group compared to controls.

There are many supplements on the market, but of the more than 250 supplements examined, creatine is the most effective supplement for increasing muscle mass and strength. Research shows supplementing with creatine can double your strength and lean muscle gains when compared to training alone. Creatine increase muscle mass thru several mechanisms such as cell volumization, increases in the anabolic hormone IGF-1, or reducing the muscle suppressing gene myostatin. One study reported that resistance trained athletes taking creatine added 5.7 lbs. of lean muscle mass in six weeks 14 . Furthermore, a meta-analysis of over, a review 150 studies reported an average 2.2% increase in lean body mass and a 3.2% decrease in body fat when subjects took creatine.

Not All Creatine Products are the Same!

One alarming statistic is that not all creatine products have the same purity. One study analyzed the purity of creatine products and possible organic contaminants in 33 samples of creatine supplements from the market. When analyzed, creatinine, the metabolic waste product resulted to be the major organic contaminant (44% of the samples). About 15% of the creatine monohydrate samples were contaminated with the dihydro-1,3,5-triazine and dicyandiamide 8 .

This is the exact dosage contained in each scoop of ATP-FORCE.

Taurine supplementation has been known to increase muscle mass, muscle strength, power, reduces muscle damage caused by exercise, accelerate recovery between workouts, and may also have an insulin-like effect in the body. The primary sources of taurine comes from the consumption of animal foods, such as meat, fish, and dairy; however, it is unlikely that these dosages will offer sufficient performance enhancing levels. Taurine has been shown to have several health benefits, such as a lower risk of disease and improved sports performance.

Taurine is a powerful antioxidant and membrane-stabilizing agent. Intense exercise causes increases in free radicals and damages muscle cells by a number of different mechanisms, including oxidative stress.

Interestingly, supplementation of taurine augments muscle taurine levels and increases muscular strength. Although the exact mechanism is not known, taurine enables more calcium to be released (inside muscle cells) leading to more forceful contractions. Taurine has also been shown to reduce inflammation associated with cellular damage and improve muscle recovery.

One of the unique properties of taurine for bodybuilders is its ability to increase cell volume or hold more water, much like creatine. When you are working out, and your muscles fill with blood and water, this causes a colossal muscle pump!!! In addition to getting a great pump, increasing cellular water is associated with increased anabolic activity and enhanced protein synthesis. Another interesting property of taurine is its anti-catabolic ability to reduce muscle tissue breakdown and soreness.

Betaine, also known as trimethylglycine, is a compound found in plants like beets and spinach. Betaine is a natural osmolyte found in the cell that protects against dehydration by increasing cellular water retention through osmosis. Previous research shows that supplementation with betaine improves muscle endurance, increases muscle mass, increases strength, and can reduce bodyfat. The increases in muscle strength are hypothesized to occur to an increase in muscle creatine concentrations.

The increases in muscle strength occur fairly rapidly as one study found that two weeks of betaine ingestion can significantly improve muscle endurance in a lower body workout by increasing the number of repetitions performed in the squat exercise, as well as improve the quality of the workout by enhancing the number of repetitions performed at 90% of the subject's maximal mean and peak power outputs. These improvements appear to occur within one week of supplementation.

A 2013 study reported that 2.5 grams of betaine (vs. placebo) supplementation enhanced performance, increased lean muscle mass, and reduced body fat after six weeks of supplementation. Subjects supplementing with betaine increased muscle mass by 4 pounds and arm size by 10% while decreasing body fat by 7 pounds. Another study reported that weight-trained athletes taking 1.25 grams of betaine twice per day increased their muscle strength by 25 percent, and their muscle power by 20 percent. They also determined that betaine significantly increased markers for muscle protein synthesis following a workout as compared to the placebo. It was found that these subjects had a 10% greater increase in growth hormone, a 15% greater increase in insulin-like growth factor-I (IGF-I), and a 15% drop in cortisol levels following a weight workout as compared to the placebo. ATP-FORCE contains the exact 2.5- gram dosage that has clinically been found to increase muscle mass, strength, and performance.

A study published in The Journal of Aging Research & Clinical Practice found the ingredient elevATP® stimulated endogenous production of ATP in humans.

In this second study—a double-blind, placebo-controlled, crossover design with 20 healthy subjects— elevATP® was again administered in a single, 150 mg serving to resting subjects who had fasted overnight (12-16 hours). The results again showed an increase in blood levels of ATP, with average levels measuring 40% over baseline levels at 60 minutes and 28% over baseline levels at 120 minutes. These results indicate that elevATP supplementation may increase intracellular levels of ATP.

ElevATP® increases muscle power output, blood flow, tissue oxygenation, metabolic waste removal, nutrient uptake, and promotes cellular recovery. ElevATP® is considered to be the next generation of nitric oxide boosters. Whereas ingredients like citrulline, arginine, and other ingredients need to be in the 6-10 grams range for effectiveness, ElevATP® only takes milligrams to be effective. The clinically studied effective dose of elevATP® is 150mg; the exact dosage is POWER-ATP!! Here are four double-blind exercise studies using ElevATP®

Study 1: In this double-blinded, randomized, placebo-controlled study, 25 men consumed either a placebo or 150 mg of ElevATP® daily during a 12-weeks of resistance training. The ElevATP® group had statistically significant increases in muscle thickness and size compared to the control group.

Study 2: In this double-blinded, randomized, placebo-controlled study, 25 men took either a placebo or 150 mg of ElevATP® every day for 8 weeks during a period of resistance training.

Study 3: In this double-blinded, randomized, placebo-controlled study, nine sedentary adults took either a placebo or 150 mg ElevATP® every day before completing a stair-climbing exercise for three consecutive days. The participants performed a significantly higher number of steps and burned more calories when taking ElevATP® compared with the placebo.

Study 4: It is recommended that you stack ATP-FORCE with VENOM or MR.VEINZ pre-workout, as combining ElevATP® with caffeine works synergistically to enhance strength and power. After 12 weeks of resistance training, ElevATP® group had greater increases in muscle cross-section area of the quadriceps and muscle thickness compared with placebo.

What is the best way to take ATP Force?
Mix one serving of ATP Force into 12 ounces of water or your favorite beverage and drink within 15 minutes before pre workout. For best results, use this product as part of a proper diet and exercise program.

Can ATP Force cause kidney problems or cramping?
No. Creatine monohydrate is actually one of the most clinically tested ingredients and has been shown in over 1500 clinical studies to improve muscular strength and endurance and none have been shown to cause any adverse side effects. However, you should expect to see support for strength, power, and endurance after taking ATP Force.

As a female, can I take ATP Force?
ATP Force is not hormonal, is simply helps your body make more ATP which means you can contract more muscles at once or contract the muscles over a longer period of time.

Mix 1 serving of ATP-FORCE with at least 12oz of water or your favorite beverage and drink 15 minutes before exercise.

Training Days: Consume one serving along with your pre workout, 15 minutes prior to training.

Non-training days: Consume one serving anytime of the day.