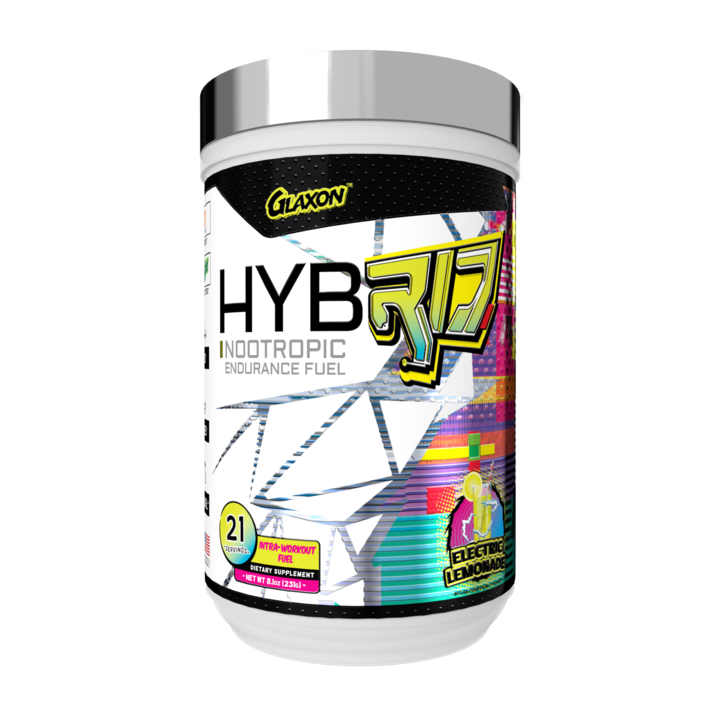 Hybrid V2 Can help with:

This version of the original goBHB® is 100% of the active isomer of D-beta hydroxybutyrate. Usually, this would mean that we could use half the dose of the previous version of Hybrid, but instead we’ve chosen to increase the dosage to 5 grams per serving - meaning that this version essentially doubles the effectiveness of the previous version. D-beta hydroxybutyrate is a ketone body usually formed through the breakdown of fats, but provides the body to much more efficiently create more ATP for muscular or cognitive work.

This blend is new from Glaxon. It’s an electrolyte blend that provides supplemental dosages of Magnesium, Sodium, Potassium, and Chloride which are essential for every cell in the body and for maintaining hydration levels. Astrolyte™ also features the addition of fructooligosaccharides (FOS) which can also support electrolyte absorption in the large intestine, while selectively feeding beneficial gut flora.

WHAT IS HYBRID V2?

Hybrid V2 is a revision of Glaxon’s previous Hybrid with upgrades for efficiency and performance. This new version refines the previous by featuring D-beta hydroxybutyrate isomers instead of a racemic mix where only 50% is biologically active. This new form of exogenous ketone salts features a slightly higher dose - making it twice as potent as the previous version and still features a blend of carbohydrates to maximize power output and improve endurance. Additionally, the use of exogenous ketone salts can also be seen as a nootropic due to the fact that the brain is able to derive cellular energy from ketones much faster than it does from carbohydrate sources, but Hybrid - like its name - still provides the best of both worlds.

WHY WOULD I TAKE HYBRID V2?

Whether you're looking to improve physical or mental performance, Hybrid V2 helps the body by increasing the body’s ability to make ATP (adenosine triphosphate) the energy that human beings run on. Additionally, Hybrid V2 features the Astrolyte Electrolyte Blend - replenishing minerals lost through perspiration and rehydrating the body and more electrolytes from the beta hydroxybutyrate salts themselves. The carbohydrate D-Ribose is also included to facilitate the formation of ATP, but Hybrid V2 also features a combination of Fructooligosaccharides and Inulin - which are insoluble carbohydrates that ferment in the large intestine into short-chain fatty acids that also enhance mineral and electrolyte absorption.

HOW DOES HYBRID V2 WORK?

Hybrid works by enhancing ATP production by providing D-Ribose - a key carbohydrate in ATP synthesis and D-beta hydroxybutyrate - the most biologically active form of exogenous ketones. The heart, liver, brain, and muscles utilize ketones very quickly and will favor them first before metabolizing carbohydrates. This combination of both ketones and carbs creates a continuous energy state that can help fuel either physical or mental activity or even both. Additionally, we have provided fermentable carbohydrates that help facilitate the absorption of electrolytes by becoming short-chain fatty acids in the colon.

HOW MUCH HYBRID V2 SHOULD I TAKE?

Mix each serving (1 level scoop) of Glaxon Hybrid into 16oz (~500mL) of water and consume 30-45 minutes prior to exercise or daily as desired. Do not exceed 2 servings per day. USE ONLY AS DIRECTED.