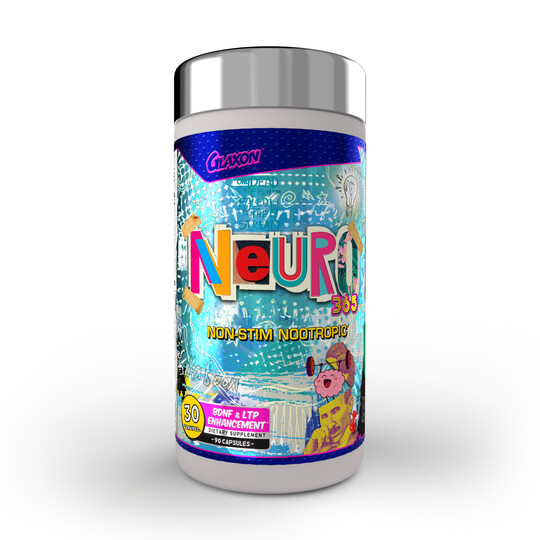 Neuro 365 is a new take on non-stimulant nootropics by focusing on two primary concepts in cognitive enhancement: long-term potentiation (ltp) mediated by several processes, perhaps the keystone regulatory event being the expression and utilization of a protein called brain-derived neurotrophic factor (bdnf). Both of these concepts are centered around the phenomena that underlie neuroplasticity or the ability for various chemical synapses to change their strength and create stronger signals between neurons.

If you’re looking for a nootropic that can be taken every day without caffeine that has more long-term beneficial effects on cognition then you should try Neuro 365. Maybe you like to get caffeine from various sources outside of nootropics and still want something to complement those effects. Neuro 365 is something that can be taken year round to help you achieve your cognitive goals specific to learning and memory.

The Neuro 365 formula is centered around increasing long-term potentiation (LTP) which has significant implications for learning and memory, and most of this is mediated through the activity of NMDA (n-methyl-d-aspartate) receptors in the brain. Several ligands and cofactors were chosen to specifically target this receptor as a means of increasing the body’s ability to form stronger neuronal connections through this process of LTP. Secondly, Neuro 365 also was formulated to promote the body’s use of brain-derived neurotrophic factor, or BDNF, which activates neurogenesis that is associated with exercise and is also triggered by activation of NMDA receptors. BDNF has some neuroprotective effects, while also supporting learning, memory, and higher thinking.

Sabroxy®: Sabroxy® is a standardized extract prepared from the dried bark of the Indian trumpet tree (Oroxylum indicum), contains a minimum of 10% Oroxylin A, to help improve memory and to support neuronal functions.*

Lipidox™: Blend of Sunflower Seed Lecithin and Bovine Bile proprietary and exclusive ingredient that can help facilitate and improve the absorption of fat-soluble nutrients.*

D-Serine: A potential endogenous ligand for the NMDA receptor, which is the main receptor in the CNS that promotes long-term potentiation and subsequent neuroplasticity.*

Dimethylglycine (DMG): Another known agonist of the NMDA-receptor that can co-bind with other ligands like D-Serine and L-Glycine. DMG can also act as a methyl donor in the synthesis of methylfolate.*

L-Theanine: Has the ability to increase focus for a solid mind-muscle connection and can reduce stress levels to promote calmness.*

Lion’s Mane Mushroom: A medicinal mushroom that may support adult neurogenesis in the peripheral nervous system.*

Sarcosine: Also known as N-Methylglycine, and a co-factor for the NMDA receptor that is capable of co-binding with other potential NMDA-receptor ligands like D-Serine.*

Neuro 365 is designed to take 3 capsules per day. These can be taken either all 3 capsules at once in the morning or gradually spread out throughout the day approximately timed with meals.