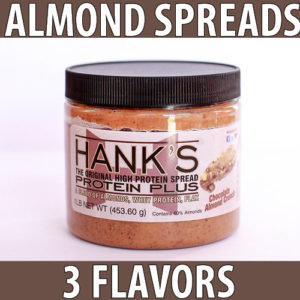 In 2015 “Almond” became one of our available selections, in fact, it was our only almond selection at the time. Our company was very small and almonds were on the precipice of increasing in cost. For a while the cost of almonds stayed the same and “Almond” was actually our #2 seller right behind Chocolate Chip.

Pretty amazing for a product with a higher price point. And at that time “Almond” was one of only 6 selections (Today we have 11). In the latter months of 2015 almonds skyrocketed in price per pound. So we had to make a decision. Sadly we needed to cut our Almond and concentrate on the nut butter spreads. As we began adding to our list of stores we began adding selections.

Almond is back and is now called Original Almond! Our thoughts are that our original Almond butter fans will recognize the name. It is now our 3rd high protein almond spread and it has already begun to fly off our shelves and store shelves. Original Almond presents a much different taste in comparison to our Chocolate Almond Crunch and our Almond Coconut Chip. We use a vanilla base of Isolate and concentrate whey protein added to our flavoring system and this allows Original Almond to offer lighter taste.

As everyone knows, almonds can be overpowering. Many people are hesitant in trying almond butter for that reason. With just the right amount of ingredients we have managed to slightly decrease the “power of the almond” and make this a selection worth waiting for. Original Almond Is Back!!

Not only can you taste almond, but our blend of protein yields an enhanced almond taste with a hint of chocolate. Almonds can be very overpowering in taste and that is my reasoning for making our protein with a blend of both almond and chocolate protein…..a 70-30 blend. The chocolate flavor evens out the almond taste just enough to make every tablespoon full as good as the first. You will be pleasantly surprised that a high protein almond spread can taste this good!

I call this one “The Masterpiece”! Our second almond spread…..its almond butter on steroids! Throughout history there have been flavor combinations that have stood the test of time. Chocolate and peanut butter, vanilla and cinnamon, salt and caramel, apples and cinnamon….. and there are others.

The legacy of this almond butter is going to be well known someday because we have created the perfect marriage of almonds, vanilla, coconut and chocolate. Why these flavors? One day my beautiful wife said that we should make something that tastes as close to an Almond Joy as possible. She has the final word on all flavors, whether it is “right or not.” Needless to say I knew this one would take some time.

So we started with perfecting the blend of proteins. Manually mixing vanilla and coconut proteins takes more time than buying a premade one….but the blend is ours, formulated by us so the taste is perfect. The protein is then placed into our 60 quart mixer with almonds, flax, stevia and salt.

Lastly we grind each pound carefully making sure that a portion of the chocolate chips are dispersed evenly into the middle. Each pound is then topped with one ounce of the best desiccated coconut that I could find and another half-ounce of chocolate chips. I truly feel that we got this one as right as right can be. We hope you love them all.