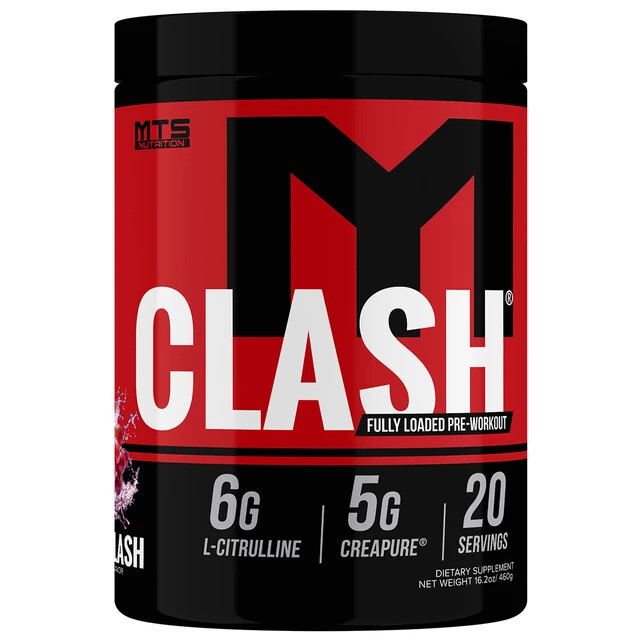 “I wanted to create the perfect supplement for ME! All science, all dosing, and with the perfect blend of intense and sustained energy. I want full dosing of scientific ingredients like Beta Alanine and Creatine in their purest, patented forms. I also wanted to be able to not worry about getting used to it and having to cycle my preworkout. With the anti-habituation effects of Teacrine, I can take CLASH every workout and still hit the intensity I need to make the gains I desire. This is CLASH, and all other preworkouts are hereby obsolete. THAT is not a game!”
-Marc Lobliner, CEO of MTS Nutrition

CLASH combines research-proven ingredients in a scientifically-validated, FULLY-DISCLOSED formula. It will not only propel you through the most grueling workouts, but also ensure you have all the ergogenic support you need to help build lean muscle and lose fat.

L-citrulline is an amino acid clinically proven to significantly decrease fatigue and muscle soreness while increasing nitric oxide, bloodflow, and arginine in the blood. Citrulline not only improves pumps and vascularity but also staves off intra-workout fatigue and facilitates post-workout recovery. Most preworkout supplements do not contain enough L-Citrulline to elicit its full-blown effect. CLASH contains a WHOPPING 6 GRAM DOSE for optimal results and the pump-enhancers don’t stop there…Agmatine Sulfate will be discussed later!

The REAL German, patented form of Creatine, also known as “German Creatine”, CLASH is stacked with the full 5-gram dose of the real deal, not some cheap stuff. This is the creatine used in studies that deemed it to be perhaps the most effective natural supplement on the market, period. This creatine has been produced in Germany since the mid-1990s. Creapure®, manufactured by AlzChem AG, is the only creatine made in Germany. This creatine is known around the world for its high quality and purity, which is due to their careful selection of raw materials, technologically and patented system for synthesizing creatine.

The REAL patented Beta Alanine demonstrated to have a significant impact on performance and strength gains, Beta-Alanine is important for Carnosine synthesis and is a pre-cursor to Carnosine. Carnosine is a buffering agent and by increasing the amount of Carnosine in the muscle, CarnoSyn® Beta-Alanine both helps increase an athlete's peak performance and helps speed muscle recovery. When supplemented, beta-alanine combines with naturally occurring Histidine to increase Carnosine in muscle more so than taking actual Carnosine.

A six-week study showed that participants were able to lose 3% body fat while gaining over 5 pounds of lean mass while using Betaine; they also increased their power while bench pressing and their arm size increased during the study. Supplementation with Betaine has increased power, force and strength in bench press and squats; furthermore, the quality of reps performed and endurance with the squat exercise are also amplified with Betaine supplementation.

One reason Betaine is able to help your endurance and extend your workouts is by increasing both aerobic and anaerobic metabolisms. It may also increase performance during workouts by improving fatty acid and lactate metabolism - all while expanding intracellular volume. Cortisol levels have been lowered when using Betaine before exercising. Additionally, Betaine may have multiple mechanisms that increase nitric oxide blood levels to assist in the increase of vascular function.

We have heard it all in the pump game. First was Arginine, which was promoted as a "Hemodilator" and "Vasodilator" and it HIT HARD and essentially started the preworkout category. We than found out through studies that it was all placebo and for Arginine to elicit any beneficial PUMP ACTION, it had to be dosed at ABOVE 10 grams preworkout and that could lead to stomach issues and also was impractical and well above what most companies put into their products.

Now we have a king, Agmatine. Agmatine is a byproduct of Arginine and at a much SMALLER dose of as low as 500mg you can elicit some great benefits, from pumps, to acting as a neurotransmitter (mental acuity), to removing metabolic waste. It does SO MUCH! Combined with the 6g of L-Citrulline, your pumps are going to be unreal!

N-Acetyl-L-Tyrosine is a more soluble form of the non-essential amino acid Tyrosine. N-Acetyl-L-Tyrosine can help with mental focus and cognitive function by increasing the levels of norepinephrine. This leads to better focus and mindset for the most intense training sessions.

Caffeine is the worlds most widely used stimulant. Caffeine is a Central Nervous System (CNS) stimulant that has been shown to reduce fatigue as well as mobilize fatty acids resulting in fat loss.

Teacrine is an energy and focus enhancer that does not make you CRASH after it hits you! This is the leader in sustained and intense energy, FULLY LOADED!

Not only does this help decrease appetite, support energy and increase fat burning, it also acts as a vasodilator and diuretic. Theobromine can aid in fat loss and provide that extra bloodflow and PUMP. Theobromine has even been linked to having an aphrodisiac effect! All of this alongside a smooth, controlled stimulant release like caffeine make it a must!

We are all familiar with caffeine and how it increases energy and focus. There are additional benefits achieved from the use of caffeine when exercising. Almost everyone in the gym has taken advantage of this glorious substance to assist us at one time or another. Creative Compounds developed and produces a specialized form of caffeine named Infinergy, an ionic bond of caffeine and malic acid to increase energy and mental focus. Infinergy may also be easier on sensitive stomachs and is an excellent way to increase mental focus while supplying a surge of energy.

These are added for their ability to stimulate mental focus and energy. Together, they are a potent combo!