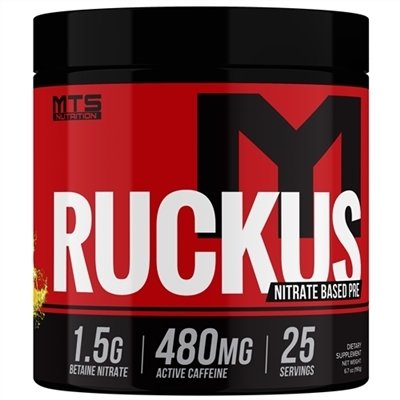 We brought the RUCKUS back... with a vengeance!

Now why the hell would we do that?

Simple. Even though it was loved and sold extremely well, we knew we could do better… and better we did!

By adding to the NO3T Nitrate-Driven Pump and Extreme Energy formula, we added compounds to ensure maximum ATP-output (elev-ATP®) - without the use of creatine. Also added were mental-focus agents in scientifically-validated doses, and a sustained-release energy matrix that combines Infinergy™, VitaShure®, pure caffeine, ultra-pure theobromine, N-Methyltyramine, Hordenine, and L-Tyrosine plus L-Taurine.

This is by far the most complete and hard-hitting creatine and beta-alanine FREE pre-workout ever created! You won’t even need those compounds.

Betaine nitrate, also known as trimethylglycine (TMG), is a reputable supplement that has been used with excellent results. Naturally occurring in several plants including beets, spinach, and quinoa, this ingredient has shown encouraging results in numerous studies.

A six-week study showed that participants were able to lose 3% body fat while gaining over 5 pounds of lean mass while using betaine nitrate. They also increased bench press power and arm size during the study.

One reason betaine nitrate is able to help your endurance and extend your workouts is by increasing both aerobic and anaerobic metabolisms. It may also increase performance during workouts by improving fatty acid and lactate metabolism – all while expanding intracellular volume. Cortisol levels have been lowered when using betaine before exercising.

Additionally, betaine nitrate may have multiple mechanisms that increase nitric oxide blood levels to assist in the increase of vascular function.

Taurine is well known for its ability to increase energy and focus. Many energy drinks are taurine-based for this exact reason.

Taurine also increases blood flow, an impressive trait that allows more nutrients to reach your muscles as you exercise. This helps increase protein synthesis as you build muscle mass.

Taurine is also well researched as a regulator of cell volume. Taurine regulate fluid balance and helps maximize hydration at the cellular level to optimize muscle function. This strongly suggests taurine is also a cell volumizer to supply another stimulus for anabolism.

Supplementation with taurine has also been shown to increase endurance when running. Taurine has numerous benefits as shown in this previous article on Tiger Fitness.

This ingredient can help improve your focus and energy by positively affecting your brain’s ability to produce norepinephrine and dopamine. Tyrosine can be used for energy by being metabolized into glucose; it can also be absorbed and merged with proteins and peptides.

The addition of tyrosine helps to keep your mind in the gym while you are working out.

We are all familiar with caffeine and how it increases energy and focus. There are additional benefits achieved from the use of caffeine when exercising.

Almost everyone in the gym has taken advantage of this glorious substance to assist us at one time or another. Caffeine is a staple in numerous pre-workouts, but Ruckus doesn’t use your typical caffeine.

Creative Compounds developed and produces a specialized form of caffeine named Infinergy, an ionic bond of caffeine and malic acid to increase energy and mental focus. Infinergy may also be easier on sensitive stomachs and is an excellent way to increase mental focus while supplying a surge of energy.

ElevATP® is healthy mitochondrial energy This is an exciting new product developed to stimulate ATP production.

Manufactured with a well-researched combination of “ancient peat” and apple extract, elevATP was developed and produced by Futureceuticals. A recent study has shown promising results with increased muscle hypertrophy when supplementing with elevATP.

N-methyltyramine HCL is found naturally in numerous plants including bitter orange, barley, and acadia. N-methyltyramine stimulates the release of noradrenaline for increased focus and it also increases activity of serotonergic, adrenergic, and dopaminergic neurotransmitters.

This ingredient helps to keep you focused on the task at hand.

The granddaddy of them all. Caffeine is the world's most widely-used stimulant. Caffeine is a central nervous system (CNS) stimulant that has been shown to reduce fatigue as well as mobilize fatty acids resulting in fat loss.

This advanced process encapsulates caffeine for a sustained release ensuring RUCKUS lasts your ENTIRE workout, no matter how long it is!

Not only does this help decrease appetite, support energy, and increase fat burning, it also acts as a vasodilator and diuretic.

Theobromine can aid in fat loss and provide that extra blood flow and PUMP. Theobromine has even been linked to having an aphrodisiac effect!

All of this alongside a smooth, controlled stimulant release like caffeine make it a must!