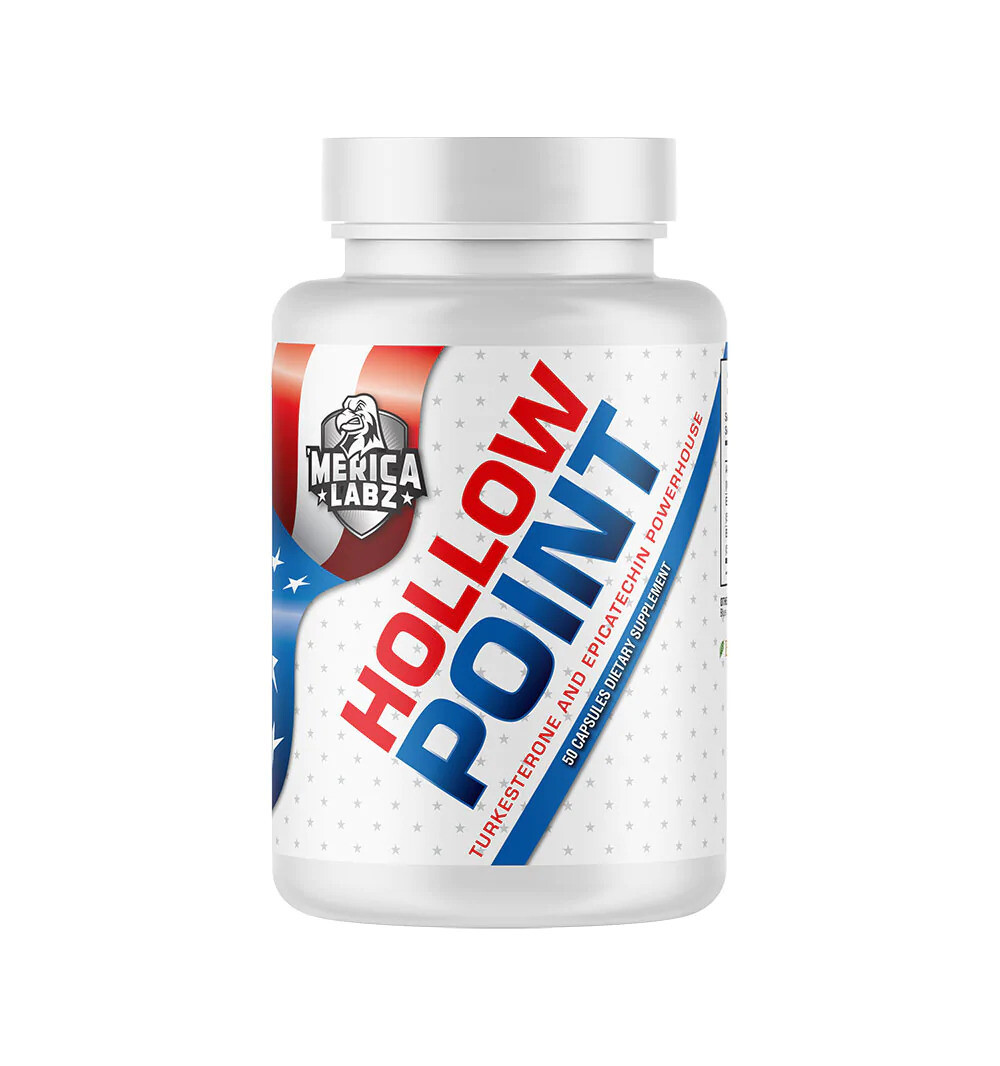 Hollow points are a powerful and explosive unit of munitions that provide impactful results. This product is based around the same thought process: a straight forward yet highly effective solution that offers significant results in a compact, explosive package. With just two key ingredients included at or above their clinical dosages, Hollow Point has can help you achieve expansive yet explosive muscle growth. If you're looking for explosive muscle growth, add Hollow Point to your supplement ammo bag.

Turkesterone, also known as Ajuga Turkestanica Extract, belongs to a group of naturally occurring steroid hormones called ecdysteroids. Extracted from the Marla root or Leuzea plant, these ecdysteroids (more commonly found in plants and other arthropods) can naturally be found in foods such as quinoa, spinach, and yams to name a few. The naturally occurring concentration in these foods is relatively low, therefore making supplementation with turkesterone a more favorable means to reap its benefits and effectiveness. Turkesterone and other ecdysteroids in the category have become increasingly popular in the fitness community due to their proposed positive impact on muscle hypertrophy. While there isn’t a significant amount of clinical data available on ecdysteroids, there is a decent amount of anecdotal user experiences online that have shown positive benefits.

The proposed mechanism to which turkesterone and other ecdysteroids work to improve how the body responds to stress and creates balance between the adrenals, pituitary, and hypothalamus. When there is a stability amongst these glands and their functions are regulated, increased muscle mass can be a result. This increase in muscle mass is thought to be as a result of heightened recovery and through its ability to increase muscle protein synthesis. Muscle protein synthesis is a metabolic process that works through the incorporation of amino acids into bound skeletal muscle proteins as well as through a proposed mechanism of increased mRNA translation efficiency and increased leucine incorporation into cells.

Another proposed mechanism of action leading to this increased protein synthesis is in ecdysteroids ability to cause a rapid influx of Ca2+ in myocytes (muscle cells) which leads to phosphorylation of Akt. Muscle proteins can be classified into two groups, myofibrillar proteins and mitochondrial proteins. It’s in the synthesis of these myofibrillar proteins (myosin, actin, etc.) where these changes in skeletal muscle are seen following resistance-based training. On the contrary, mitochondrial proteins are synthesized following endurance-based training bouts. With all of this being said, the primary goal of muscle protein synthesis is to produce protein in the form of amino acids to repair muscle that has been damaged by a bout of training. When increases in muscle protein synthesis can be exhibited, it can allow for a stronger response to this broken-down muscle tissue to allow for more growth and strength potential to these fibers.

Along with this increase in muscle protein synthesis, increased strength metrics as well as anabolism has been noted. While a majority of these benefits have been seen in vivo and in a wide variety of animals (rats, mice, pigs, etc) studies prior to the year 2000 suggest that these benefits may also occur in humans as well. More recent studies are needed though to validate this.

To summarize, turkesterone is a relatively new ingredient making waves in the health and fitness community. With its anecdotal benefits of more efficient recovery along with a greater response to training in the form of increased muscle protein synthesis, it is plausible that with the right training stimulus and nutrition protocol that increased muscle mass and strength can be a result of turkesterone supplementation.

Epicatechin is a plant-based phytochemical, or flavanol, that is found in trace amounts in foods and liquids such as dark chocolate and green tea. Its physiological benefits have been studied for years and have resulted in promising results in relation to:

These proposed benefits listed above and the compelling research surrounding them has led epicatechin to be involved in innovations where muscle growth and improved performance are the goal.

How does epicatechin work? Glad you asked. The proposed mechanism of action of epicatechin is through the inhibition of myostatin, which is a type of protein called a myokine that in essence acts as a regulating molecule released by muscles. Increased levels of myostatin have been linked to limiting the level of muscle growth. To combat an increased concentration of myostatin, epicatechin can work to increase another protein called follistatin which the body can then use to control metabolism, promote muscle growth, and boost fertility. Increased myostatin has been linked to the clinically obese and inactive as well as individuals who have some degree of insulin resistance. Studies have shown that aerobic activities, strength training, and some modifications to diet can, to a degree, decrease myostatin levels in muscle. When it comes to epicatechins ability to increase follistatin levels and further inhibit myostatin concentrations as few studies have been conducted for its efficacy.

One study conducted on males showed that just 170mg of epicatechin per day was able to increase follistatin by about 50% and decrease myostatin by about 17%, which also coincided with an increase in strength of about 7%.

Looking at epicatechins nitric oxide boosting benefits, one animal study showed that nitric oxide and endurance was able to be increased even in the absence of exercise. This can aid in nutrient absorption and improved heart and muscle health outside of the gym but in the gym, it can also result in greater blood flow to muscles and stimulate a better pump in response to training.

The literature that has been presented on epicatechin in in vivo studies on muscle growth potential and improved overall health is promising and when combined with the other ingredients in this product, the body can be set up for the most beneficial environment for muscle growth, strength increases, and increases in performance.

BioPerine® is a patented standardized extract from the fruit of Piper nigrum (black pepper). It’s studied benefits have shown improvements in bioavailability of nutrients it is surrounded by. When it comes to most nutritional additions, efficiency and speed with which nutrients can enter the system and get to their target is of the upmost importance. The “window of opportunity” is much larger than what has been previously thought, but when your results weigh heavily on an ingredient (or group of ingredients) effectiveness, maximal absorption and use of nutrients is extremely important.

Several studies looking at BioPerine®’s impact on nutrient absorption have been done. In general absorption of nutrients has been found to be in the ranges of about 30%, with some being more in the 50-60% range. One study looking at the efficacy of BioPerine® on serum concentrations of curcumin showed bioavailability was improved by more than 500%. Therapeutic effectiveness of curcumin has often been exhibited as low. Another study conducted over the course of 6 weeks on BioPerine® influence on serum selenium levels in humans showed an increase by 145% over the presupplementation value.

With promising research being done on the effects of BioPerine® in the context of nutrient absorption and bioavailability, it is only fitting that we include it in HOLLOW POINT, when muscle building potential is of the utmost importance!