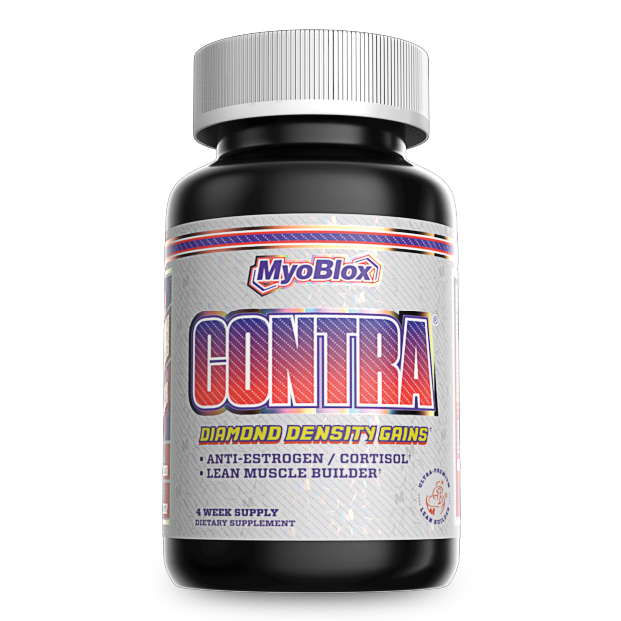 CONTRA® is an ultra-premium, highly potent supplement that has been shown to not only increase testosterone, but also decrease cortisol levels to maximize your body's anabolic state. CONTRA® also possesses natural aromatase inhibiting properties to keep unfavorable estrogen levels at bay and in turn, supporting all of your hard earned gains!† Promote Hard, Lean, Dry Muscle Gains!†

BEHIND THE CONTRA INGREDIENTS:

Ashwagandha is an Ayurvedic adaptogen that is mostly used to combat stress and increase fertility. It is so highly touted that it is often called the "King of Ayurveda" and oddly translates to "smell of horse." The main active compounds in ashwagandha are called withanolides, which are steroidal lactones found in the root of the plant.1 KSM-66® is standardized to 5% withanolides, but also keeps the exact ratios of withanolides that naturally occur in the plant. Ashwagandha has tons of health benefits, but for the purpose of this article, I will focus on its ability to decrease cortisol and increase testosterone levels. Cortisol is a catabolic hormone released from your adrenal glands during periods of stress. While in small amounts it can be beneficial (fight or flight), prolonged elevated levels are more conducive to storing bodyfat and breaking down muscle tissue.

KSM-66® is also an excellent testosterone-boosting supplement. In a study involving 180 hypogonadic men, subjects given 5g/d of raw ashwagandha for 3 months showed an increase of up to 22%.3 Another study in 57 healthy males(average starting testosterone levels of 630ng/dL) given 300mg or KSM-66® twice daily for 8 weeks showed a 15% increase in total testosterone levels(the placebo only saw a 2.5% increase). Researchers also noticed a significant increase in 1RM bench press and leg extension, as well as a 3.5% decrease in body (the placebo only dropped 1.5%).4 Ashwagandha has even been shown to increase sexual function, libido, desire, and fertility in women.5 Typical doses of raw ashwagandha are up to 5g of root a day, and 600mg of standardized formulas like KSM-66®.

Although not a widely used compound, this is a specific extract to enhance aromatase inhibition. If you know anything about aromatase, is the culprit enzyme in the body responsible for biosynthesis of estrogens; something every hard earned physique does not want!

DIM is the main active metabolite of indole-3-carbinol, which is found in many cruciferous vegetables including brussel sprouts, turnips, kale and cabbage. The main mechanism of action for DIM is two-fold: it can, in low doses act as an aromatase inhibitor preventing the conversion of testosterone to estrogen (however in high doses can have the opposite effect), and it can modify potent estrogens into healthier estrogens via selectively hydroxylating certain parts of the estrogen molecule.6 For example, 4-hydroxyestradiol is a very potent estrogen that can cause gynecomastia in men. DIM metabolized estradiol into the less potent 2-hydroxy estrone, which is then eliminated. DIM also binds to the aryl hydrocarbon receptor (AhR) which causes a downregualtion of estrogen receptor production. Some studies show that a metabolite of 2-hydroxyestrone, 2-methoxyestradiol can even help displace testosterone that is bound to sex hormone binding globulin (SHBG) to increase free testosterone levels. This is due to 2-methoxyestradiol's high affinity to SHBG.7 Interestingly, 2-hydroxyestradiol is not suppressive to the HTPA where 4-hydroxyestradiol is. This may also indirectly increase testosterone levels.8 Typical doses of DIM are between 100-300mg daily.

N-coumaroyldopamine is a naturally occurring beta-2 adrenergic receptor agonist that is extracted from Theobroma cacao. Beta-2 agonists are the most effective mechanism for inducing fat loss in humans. Some examples for strong beta-2 agonists are ephedrine and clenbuterol. Inside the body, N-coumaroyldopamine gets broken down into dopamine. Due to its structure, it is highly selective to specifically the beta-2 receptor, not beta-1 which is responsible for the heart palpitations and sjdablffb. N-coumaroyldopamine works by increasing the messenger molecule cyclic adenosine monophosphate (cAMP). cAMP activates a process called lipolysis, which is when your cells release fatty acids to be burned as energy.9 Elevated levels of cAMP have also been associated with increased vasodilation, increased metabolic rate and energy expenditure.

Beta-2 adrenergic receptors can also have an anabolic effect in muscle tissue and even have been used in the treatment of muscle wasting diseases like sarcopenia and cachexia.10 Typical daily doses of N-coumaroyldopamine have not been established, but seems to have an effect in the 20-40mg/d range.

Derived from peppercorns from Piper Nigrum Plants, Bioperine® is a patented extract that is used as a bioavailability enhancer of numerous nutrients via stimulation of the digestive tract. On top of its noted benefits Piperine may also have an indirect function to increase thermogenesis.†

Contra is meant to be taken for up to 8-12 weeks before cycling off. For maximal benefits, Contra may be stacked with Mania.