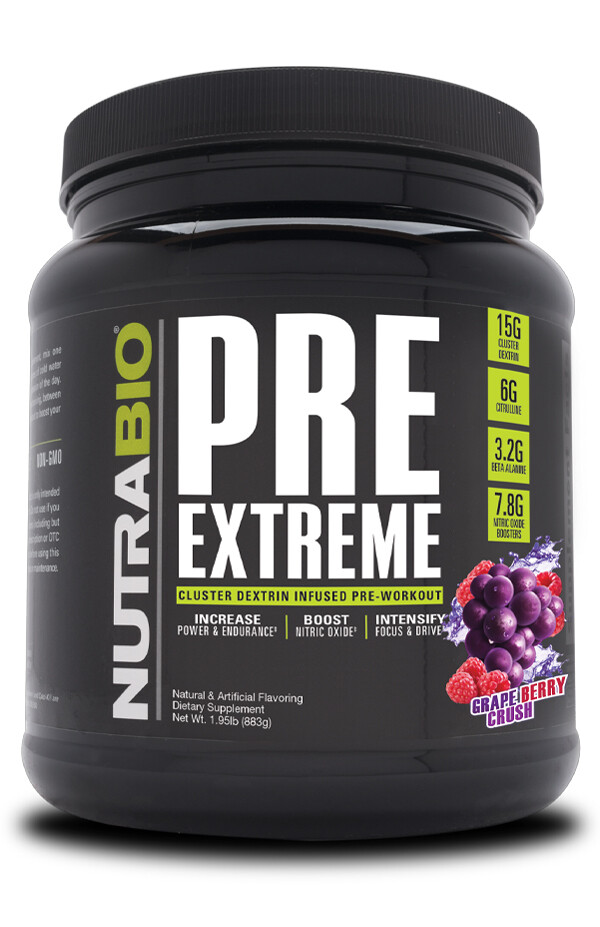 NutraBio PRE Extreme is the hardcore and ultra-high stim version of our original PRE formula. On top of the time tested and research proven ingredient profile already found in PRE; we added 15,000 mg of Cluster Dextrin and 4 mg of Yohimbe to PRE Extreme in order to rapidly supply working muscles with fuel (glycogen) and take your energy and focus to the next level. This potent combination makes PRE Extreme the most advanced, most intense, and hardest hitting pre-workout on the market today that will allow you to push your limits further than ever before. PRE Extreme is built upon clinically dosed and scientifically backed ingredients proven to maximize workout performance and produce results. Athletes of all levels realize that in order achieve the most effective training session that energy, strength, endurance, and focus are a must. A complete pre-workout supplement should support all of these benefits. The synergistic combination of ingredients found in PRE Extreme help prepare your body physiologically and psychologically by amplifying energy, enhancing the mind-muscle connection, and supporting increases in muscular strength, power, and endurance. From top to bottom PRE Extreme will help keep you training stronger and longer. Take a deeper look into PRE Extreme and you will find:

Since day one NutraBio has never been happy maintaining the status quo when it comes to pre-workouts. We have always been the innovators; not the replicators. Although the industry makes it seems like non-proprietary blends, proper dosing, and scientifically backed ingredients are something new; the fact is NutraBio pioneered this trend over 15 years ago. We focused on creating the best, and we've done just that with PRE Extreme. PRE Extreme has everything you need in one comprehensive, open label, clinically dosed formula and nothing you don't. We pride ourselves on purity. What you see on the label is exactly what you get. PRE Extreme contains no fillers, excipients, proprietary blends, or other potentially unhealthy or unneeded additives.

At the end of the day, NutraBio isn't just about marketing hype and trying to maximize our profit. It's all about giving athletes what they want to meet their performance needs by giving them access to clean supplements that are innovative and effective. Like you, we want to train hard and see the results of our efforts. Compare NutraBio PRE Extreme to any other so called "hard core" pre-workout on the market and ask yourself whose formula was created WITHOUT COMPROMISE. We think you'll find that even the most self-proclaimed strongest formulated pre-workouts pale in comparison to PRE Extreme.

The Science Behind NutraBio PRE Extreme

What is the best way to take PRE Extreme?

Why does PRE Extreme contain carbohydrates? I heard carbs are bad for you.

Can I take PRE Extreme with other stimulants (i.e. coffee, fat burners)?

I see PRE Extreme has 350mg of caffeine. Is that amount safe?

I heard creatine can cause kidney problems and cause cramping. Is that true?

What makes PRE Extreme better than other pre-workouts?

Suggested Use: As a dietary supplement, mix 1 heaping scoop of PRE into 12-14 ounces of water and consume 30-45 minutes prior to resistance training. Vary the amount of water to achieve your desired flavor level. PRE is extremely powerful, first time users should begin use with 1/2 scoop or less to assess your tolerance. DO NOT EXCEED 1 SCOOP IN ANY 24 HOUR PERIOD OR USE MORE THAN 5 DAYS IN ANY 7 DAY PERIOD.

WARNING: KEEP OUT OF REACH OF CHILDREN. This product is only intended to be consumed by healthy adults 18 years of age or older. Do not use if you are pregnant, breast feeding, sensitive to caffeine, have known medical conditions (including but not limited to kidney, heart or liver disease) or are taking prescription or OTC medication(s). Consult with your health care practitioner before using this product. Do not use under extreme conditions of heat, CARDIOVASCULAR EXERTION or dehydration. CONTAINS CAFFEINE. Do not use with caffeine or stimulant-containing medications, foods or beverages because too much caffeine may cause nervousness, irritability, sleeplessness and occasionally rapid heartbeat. Discontinue use and consult with your health care professional if you experience any adverse reaction to this product. Do not exceed recommended serving.