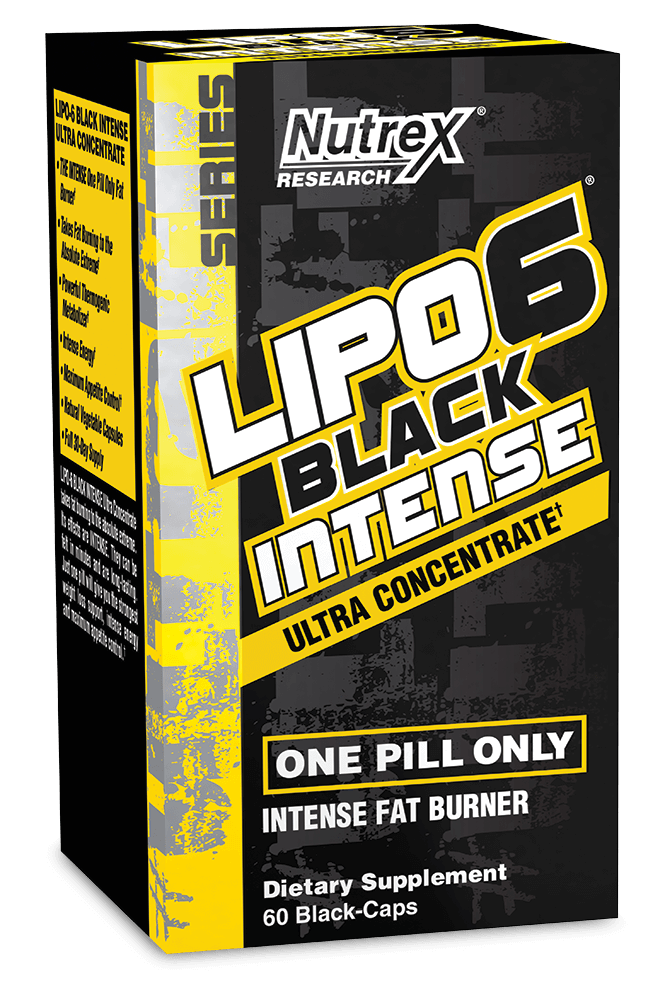 You might be familiar with LIPO-6 BLACK Ultra Concentrate—one of the industry's top-selling fat burners. Nutrex now proudly introduces LIPO-6 BLACK INTENSE ULTRA CONCENTRATE, featuring the latest innovations in fat burning technology taken to the extreme. So extreme, in fact, that its effects can only be described as INTENSE! Quick acting caffeine citrate can be felt in mere minutes, but the addition of TeaCrine ensures that the energy is both clean and long lasting. Just one single Black-Cap will give you the strongest, most comprehensive weight loss support on the market: intense energy and unmatched appetite control. With LIPO-6 BLACK INTENSE ULTRA CONCENTRATE, Nutrex pushed the fat-loss innovation further than ever before!

Both Yohimbine HCL and Rauwolscine are very potent alpha-receptor antagonists. There mode of action is, that they can block the activity of receptors responsible for stopping fat breakdown. Consuming both compounds twice a day can significantly speed up the release of free fatty acids into the bloodstream. When taken before training or cardiovascular activity they can induce significant fat-loss beyond the point in exercise where it would normally stop.†

Advantra Z® is a patented ingredient extracted from Citrus Aurantium and standardized for the bioactive alkaloid p-synephrine. Advantra Z® has been shown to stimulate certain receptors that increase the release of fat from fat cells while increasing metabolic rate (rate at which we burn food energy). It has further been proven to induce a highly noticeable appetite suppression effect.†

Research has shown TeaCrine® boosts energy, mental clarity and clean focus but without the jitters, fatigued crash and tolerance build-up over time. The energy boosting effects of TeaCrine® have been shown to be long-lasting as they remain noticeable for a prolonged period after consumption. When taken before exercise TeaCrine® supports the release of free fatty acids into the bloodstream.†

Caffeine is one of the most well-researched performance enhancement ingredients. LIPO-6 BLACK INTENSE ULTRA CONCENTRATE includes two active caffeine sources, Caffeine Citrate and Caffeine Anhydrous. Caffeine Citrate is the ideal stimulant for those looking to increase energy as quickly possible because it raises caffeine blood levels faster than other caffeine sources. Supplementing with Caffeine immediately increases work volume and muscle strength, mental alertness and mood, assists in fat loss and helps you train at a higher intensity level.†

Research has shown that this amino acid supports increased motivation, mental focus and alertness. It is known as a mood enhancer, increases energy during exercise and simply allows you to be at your peak performance.†

Due to the intense nature of this product all guidelines should be strictly adhered to. Take 1 Black-Cap in the morning and 1 Black-Cap in the afternoon. NEVER EXCEED 1 BLACK-CAP PER SERVING. NEVER TAKE MORE THAN 2 SERVINGS IN A 24-HOUR PERIOD. For best results do not take with food. Consume at least 45 minutes before a meal. Do not take within 6 hours of sleep.