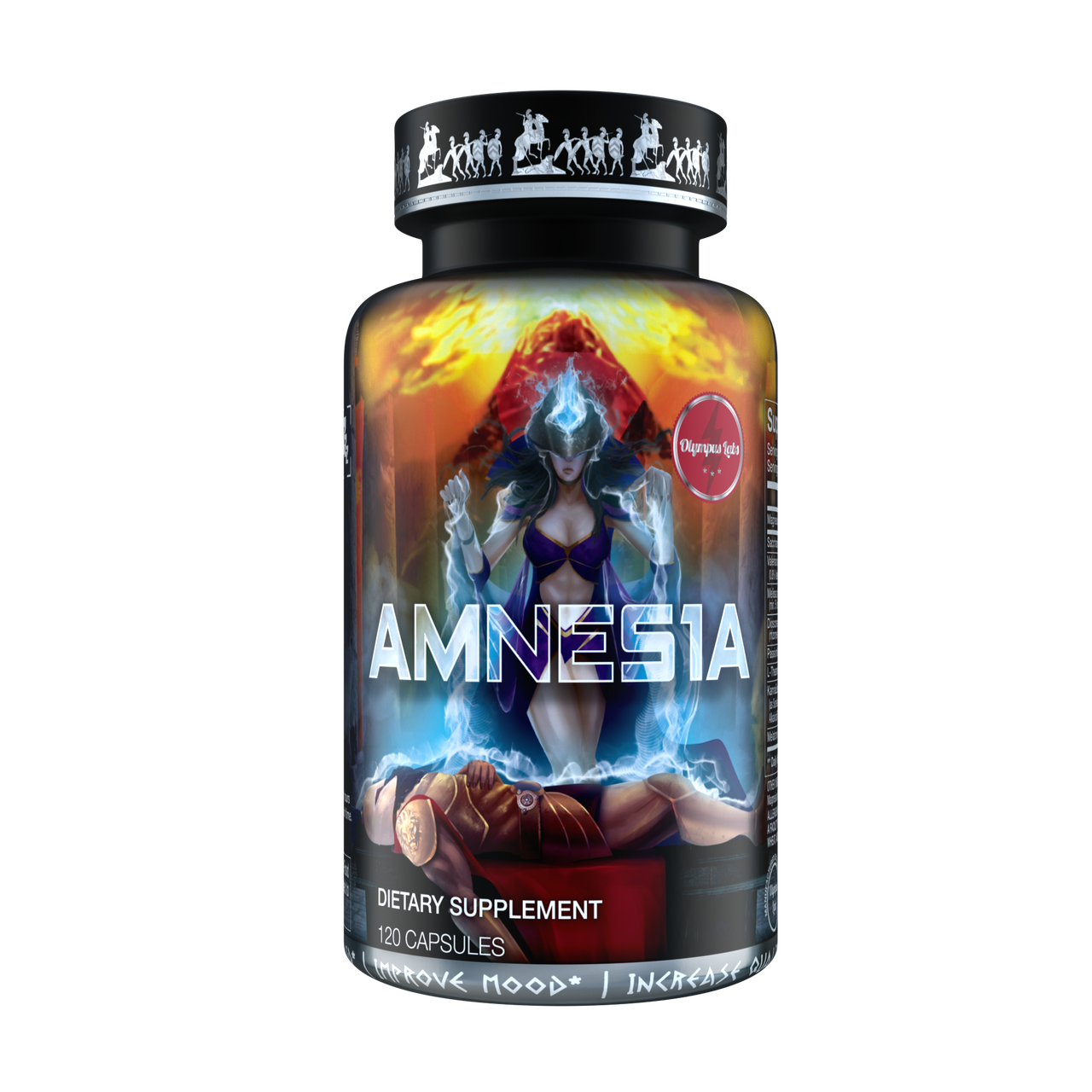 Science and technology has brought society many benefits, but it has also has made life more complex. Days have become longer and longer in an attempt achieve our goals. This phenomenon is commonplace in the bodybuilding community where we strive to be bigger, stronger and leaner which requires time and dedication. Often, that quest for greatness results in excess stress and inadequate amounts of sleep. That can impede muscle recovery ultimately hindering your progress in the gym. It may be impossible to have it both ways. However, Olympus Labs and our R&D team are adept at making the impossible, possible. We have developed a sleep aid that is so effective; it will help you relax and achieve a state of REM (rapid eye movement) sleep, without any grogginess upon waking. Olympus Labs brings you AMNES1A.

AMNES1A can be defined as the selective overlooking of events or acts that are not favorable or useful to one’s purpose or position. Sometimes you need to put a bad day behind you and start anew the next day. How can you do that with poor sleep? Similarly, you cant go harder in the gym and progress in your training without adequate rest and recovery. AMNES1A was developed to ensure you maximize the positive benefits of sleep. Proper sleep will not only help you make progress at the gym but also improve your overall quality of life. It can improve mood, memory, weight management and hormonal balance. Therefore, AMNES1A can be beneficial to anyone; male or female, young or old and athlete or non-athlete.

AMNES1A features 9 effective ingredients, optimally dosed based on science because Olympus Labs never sacrifices efficacy for profit! How can you differentiate AMNES1A from the competing sleep aid products? The science clearly separates AMNES1A from any other sleep aid on the market. AMNES1A consists of some well-known ingredients including KannaEase™, L-theanine, melatonin, and valerian root, among others that have proven to be effective for reducing fatigue, anxiety, sleep latency (time to fall asleep) and improving sleep quality However, Olympus Labs has developed quite a reputation for innovation and we would not disappoint our loyal fans. AMNES1A features two innovative compounds; Saccharomyces Cerevisiae and Dioscin. Both ingredients have been found to improve sleep quality but more interestingly increase growth hormone secretion which can increase exercise performance and lean muscle mass. In addition to the all the positive benefits for sleep AMNES1A it provides accelerates lean muscle growth, the Holy Grail for natural bodybuilders.

Sake yeast is a type of yeast used to produce Japanese rice wine (Sake) and other traditional Japanese foods. Unlike other types of yeast, sake yeast is enriched in adenosine analogues.

Recent research has identified that adenosine acts as a homeostatic regulator of sleep and to be a link between the humoral and neural mechanisms of sleep-wake regulation. Moreover, research on the adenosine pathway in sake yeast found that it can induce deeper sleep, increase growth hormone secretion and reduce fatigue upon waking.

Dioscin is a glucosid saponin found in plants. It has shown lipid-lowering, anti-cancer and hepatoprotective properties. More interestingly, dioscin has shown ability to stimulate growth hormone release in pituitary cells. This finding is significant because it means that AMNES1A goes well beyond inducing a deep, restful sleep. Dioscin, via GH release, will help you build lean mass and improve recovery.

Kanna is an herb that is commonly referred to as Sceletium tortuosum that has been traditionally used for its cognitive effects. It has been used as a clinical treatment for anxiety and depression since it promotes a sense of wellbeing and can relieve stress. Specifically, Sceletium tortuosum works by dual 5-HT reuptake inhibition and PDE4 (phosphodiesterase subtype 4) inhibition which plays a crucial role in regulating cognition via the PDE-4- cAMP cascade signaling pathway involving phosphorylated cAMP response element binding protein (CREB).

Passionflower (Passiflora incarnata) is a herb traditionally used in the Americas and Europe as a calming herb for anxiety and insomnia. Research indicates passionflower works by increasing levels of a chemical called gamma aminobutyric acid (GABA) in the brain which lowers the activity of some brain cells resulting in a relaxed feeling

Valeriana officinalis, also referred to as valerian root, is a perennial herb comprised of three
essential oils; valerenic acid and valenol, valepotriate and a few alkaloids. Valerenic acid can bind to gamma hydroxybutyric acid (GABA) (A) receptors and elicit a sedative effect. It has traditionally been used to treat restlessness, tremors and anxiety. However, it is becoming increasingly popular as a sleep aid and a treatment for insomnia. The main benefit of Valerian is its ability to improve sleep latency (time to fall asleep).

Melissa officinalis also referred to as lemon balm is a traditional herbal medicine. It has been used as a mild sedative, and more recently, clinical studies show Melissa officinalis can improve mood, cognitive performance, reduce stress and also may induce anxiolytic effects.

L-theanine Is an amino acid that can be found in green tea. It has been known to produce mental relaxation, lower blood pressure and improve learning ability in human beings. Other research in animals have shown L-theanine decreases serotonin and increases norepinephrine in the brain. It is known to cause a relaxing feeling yet not being sedating which is the reason it is often used with stimulants such as caffeine as it can take the edge off.

Melatonin is a hormone secreted by the pineal gland in the brain, well known for inducing and regulating sleep. Melatonin supplementation is known to normalize abnormal sleep patterns by decreasing sleep latency. It is one of the most widely used sleep aid supplements because it is effective and non-addictive.

Magnesium is an essential dietary mineral, and the second most prevalent electrolyte in the human body. It is found in several foods including nuts, seeds, legumes, leafy greens, dairy products, bran cereal, brown rice and fortified foods. Magnesium has several health benefits including blood pressure and blood sugar regulation, muscle and nerve function, and the construction of protein, bone and DNA. All aspects contributing to your recovery. According to the Office of Dietary Supplements, men should consume approx. 400-420mg of magnesium daily. But since magnesium is prevalent in several foods and high supplemental doses are associated with GI distress, AMNES1A yields 133mg of magnesium from Magnesium Aspartate. Magnesium aspartate was chosen because it is among the most bioavailable forms of magnesium.

Olympus Labs has your workout supplementation covered with the most effective pre-workout, RE1GN, and intra-workout, ENDUR3. But dont forget about proper rest and recovery. It would be a shame to hinder your progress due to poor sleep. Once again, the DemiGod team has your back with a product like no other in its category. AMNES1A will relax your body and mind without knocking you out. You will wake up with an improved mood, without feeling groggy or fatigued. Furthermore, AMNES1A you recover and grow which ultimately wil allow you to maintain a high intensity everytime you are in the gym.