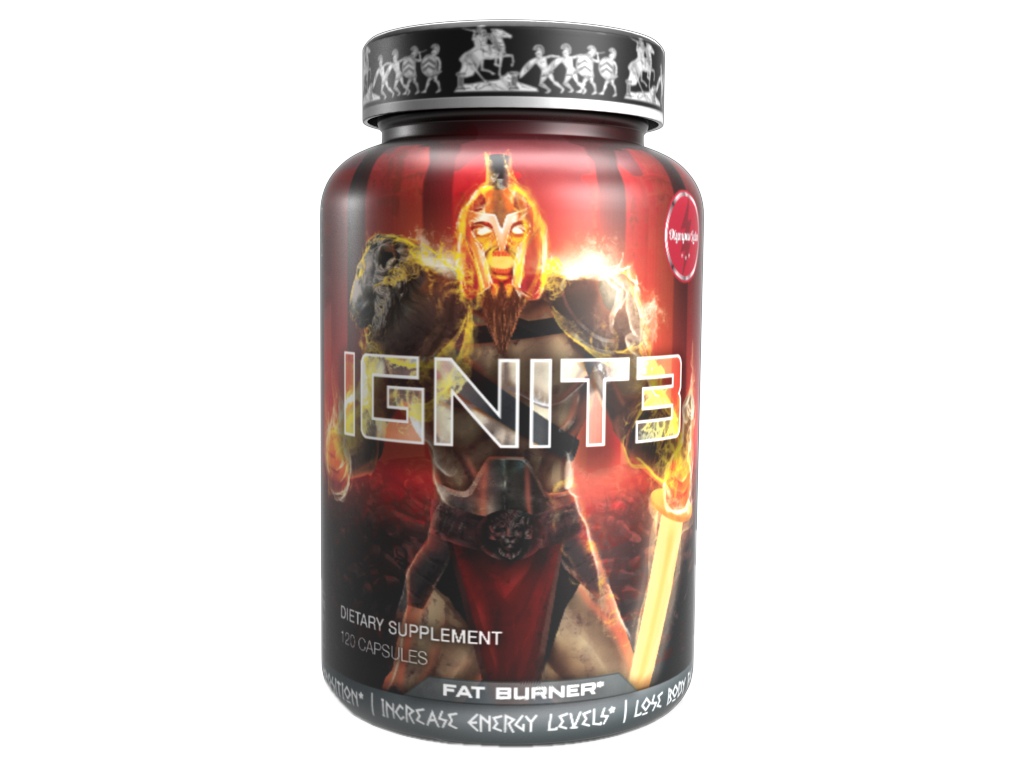 SET YOUR FAT ON FIRE

Olympus Labs presents IGNIT3: an explosive fat incinerator! IGNIT3 is like nothing you have used before. It is truly a revolutionary product based on cutting edge scientific research. The comprehensive, clinically dosed formula will provide real world results and assist you in meeting your fat loss goals! 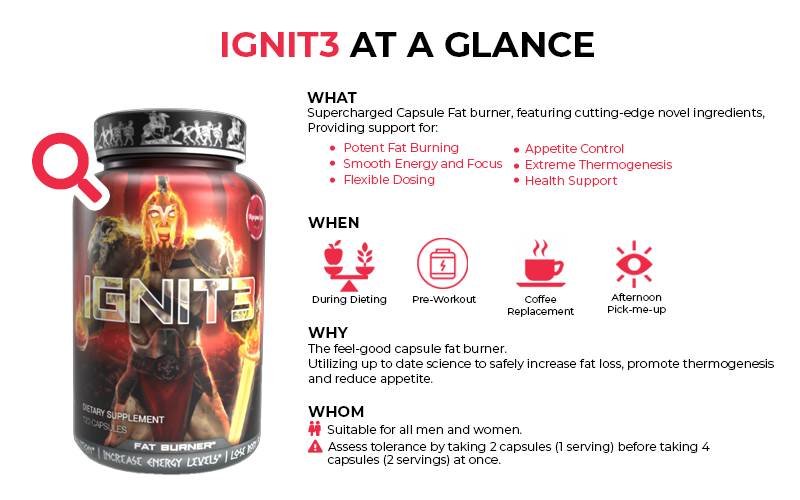 Is IGNIT3 Right for Me?:

IGNIT3, as a clear-cut fat burner, should be used when fat loss is your primary goal. It is best used in cycles of 6-10 weeks for optimal results. IGNIT3 can be stacked with other non-stimulant fat burners, such as ASSASS1NATE for further enhanced fat loss.

This product can be used by both men and women over the age of 18 years who are interested in a potent fat burner which provides extreme energy, appetite suppression and thermogenesis.

Gynostemma Pentaphyllum Extract - An herb that has been typically been used in Asian countries as a treatment for type 2 diabetes and inflammation. It has been shown to stimulate fat oxidation and glucose uptake by potently activating AMP-activated protein kinase (AMPK).

Caffeine Anhydrous - the most popular and common stimulant on the market to enhance energy and performance. It also effectively boosts lipolysis and suppresses appetite.

Nomilin - Is among the strongest naturally occurring TGR5 agonists on the planet. It has been shown to enhance fat loss and glucose metabolism, promote Bile homeostasis/liver health, improve immune function and also boost vasodilation.

Olive Leaf Extract - Specifically extracted for high concentration of Oleuropein. It possesses antioxidant, anti-inflammatory and anti-atherogenic effects and suppresses proliferation of fat cells in the body. Oleuropein has also been found to exert anti-adipogenic effects through direct inhibition of PPARγ. Furthermore, it has been shown to enhance thermogenesis by increasing the uncoupling protein in Brown Adipose Tissue.

TeaCrine - Similar in both structure and function as caffeine, it yields long lasting energy and doesn’t come with the tolerance build up like caffeine does.

Dynamine - A close relative of both TeaCrine and Caffeine, however Dynamine is said to pack a harder punch in a shorter period of time. It provides a very quick onset of both energy and focus. It is said that the effects of Dynamine can stretch out as far as three hours.

Ginger Root Extract - Contains pungent phenolic substances collectively known as Gingerols. These pharmacologically-active components of ginger have been reported to possess gastro-protective and cholesterol-lowering properties. However, it is included in IGNIT3 because it can stimulate the peroxisome proliferator-activated receptor δ (PPARδ). As a PPARδ agonist, 6-gingerol will causes weight loss through increased energy expenditure and the browning of white fat.

Sesamol - Is a phenol derivative of sesame oil. It is a natural potent antioxidant and anti-inflammatory ingredient that has been found to be a PPAR-γ modulator. It promotes enhanced fat lipolysis and oxidation, while also protecting against diet induced obesity.

Aframomum Melegueta P.E. - Known to activate thermogenesis in Brown Adipose Tissue and thus is a beneficial ingredient for the regulation of weight loss and weight maintenance. Clinically studies have shown it boosts energy expenditure of healthy subjects without additional exercise.

Take 2 capsules (one serving) on an empty stomach 2-3 times per day. Do not exceed 6 capsules in 24 hours.