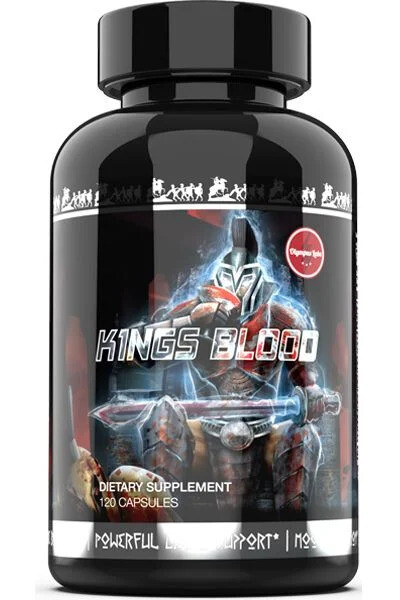 A Supplement Fit For a King!

The next evolution in virility and vitality optimization is here with the latest K1ngs Blood formula! Everyone deserves to feel larger than life like a king, with a spring in their step every day, to thrive mentally, physically and dare we say sexually! Olympus set themselves out to improve on prior versions and after painstaking research and vigorous trial and error, they have created a product that undoubtedly excels in every aspect, to deliver the best formula on the market!

Olympus Labs in its usual style, continues to outperform the competition to bring you the most innovative and effective supplement not just for supporting testosterone levels, but to also enhance exercise performance, boost libido and supercharge that “alpha” feeling when you need it most.

K1ngs Blood features eight highly researched, quality ingredients at their clinically effective dosages! Do not be fooled by the imitators … Olympus Labs utilizes the highest quality extracts, including 5 patented ingredients, to give you the best results possible. This product was designed to be utilized anytime as a remarkably effective standalone hormonal, virility and performance booster, yet will undoubtedly be powerful enough to be used in PCT to provide the ultimate support when it is needed most.

Let’s explore some of the main functions of Kings Blood:

To better understand how K1ngs Blood supports our bodies hormonal system, let us review some basic science. We are sure many of you have seen the common abbreviation “HPTA”, which refers to the key axis between the brain and the gonads which regulates endocrine function. The key hormones involved are follicle stimulating hormone (FSH) and luteinizing stimulating hormone (LH), collectively known as gonadotropins. They both act directly on the testis to promote the production of hormones (known as steroidogenesis) and reproductive functions (known as spermatogenesis). This ultimately results in the production of key androgens such as testosterone.

Test is a sex hormone (androgen) that is responsible for the development of masculine features and promotes muscle mass and sexual function. A common term that is used is total test, which is the combined amount of free and bound testosterone in the body. Free test is test that is bioavailable or active in the bloodstream that your body utilizes and is a responsible driver in promoting enhanced sexual function and muscle tone. Bound testosterone is bound to a protein called sex hormone binding globulin (SHBG) and that form is inactive.

Ultimately, you want to "free" the bound test from SHBG so your body can utilize it.

While it is advantageous to have high total test level, it is important to note that you also want higher levels of free test and lower levels of SHBG. Of course, K1ngs Blood has all this covered and so much more!

K1ngs Blood is a fully loaded formula which features all the renowned favorites such as extremely high-quality Icariin, PrimaVie® and KSM-66®. However, this newest version also contains a number of superstar new additions with FUROSAP® - A clinically evaluated Fenugeek extract to contain a consistent, high-quality amount of the testosterone boosting active Protodioscin (an compound which is so often faked on the market). Further, Olympus pushed the limits with sourcing possibly the most effective (no costs spared) extract of Tongkat Ali known as BIONUTRICIA® - forget about the endless amounts of useless 10:1, 100:1 ratio extracts on the market which in reality contain little to no active ingredients. BIONUTRICIA® is the absolute most effective extract available, it is standardized to contain a minimum of 2% Eurycomanone (up to 3%). This compound is the most clinically validated ingredient which provides the beneficial effects that Tongkat Ali provides!

So how do all these ingredients actually work?

The ingredients found in K1ngs Blood synergistically work together to directly promote optimal hormonal production and spermatogenesis, through supporting the production of Gonadotropins FSH and LH, which drive reproductive function and testosterone synthesis, respectively.

Additionally, K1ngs Blood also promotes a healthy balance of cortisol and estrogen levels which can have a large impact on mood, energy and body composition. Cortisol is the body's stress hormone that controls your "fight or flight" response in a crisis. It plays a critical role in managing your sleep/wake cycles, blood pressure, blood sugar and inflammation. Cortisol also manages how your body metabolizes macronutrients, in fact high cortisol is associated with excess belly fat.

BIONUTRICIA® is a premium quality, standardized extract of Tongkat Ali, also known as Eurycoma Longifolia or Long Jack. Tongkat Ali is derived from a plant in South East Asia and is commonly referred to as Malaysian ginseng. BIONUTRICIA® is actually sourced from Malaysia and every batch is third party lab tested (by the Forest Research Institute of Malaysia) to verify it contains a minimum of 2% Eurycomanone (up to 3%), which research has shown to be most bioactive compound, delivering many of the purported effects! Further, this extract is also guaranteed to contain 30-38% Glycosaponins, 28-32% Polysaccharides and 18-24% Protein – Truly a fully disclosed extract!

Tongkat Ali has been around a long time – Perhaps you have tried it a few times and noticed nothing from it? There is a reason for this, a dirty little secret that many brands utilize to massively save on costs but at the same time provide you with an almost entirely worthless ingredient.

This occurs using ratio extracts! An example of this could be the infamous 100:1 extract – it would be reasonable to believe this means the extract is 100x concentrated, compared to the raw plant…in reality it couldn’t be any further from the truth. In fact, 100:1 extract could simply mean using a magical spoon 1 part of a ground plant could be scooped from a 100-part pile of raw plant…Kaboom there is your 100:1 extract with literally no actives contained in it.

Think about it – these extract mention nothing about solvents used, process methods or any inkling of standardization to specific actives..It isn’t a coincidence, it’s just dirty practice to save enormously on costs and still dress the label. Olympus is proud to call this out and deliver you with actual effective Tongkat Ali, whilst sparing no costs.

So what can you expect?

Standardized Tongkat Ali, in this case specifically for Eurycomanone has been shown to improve energy and libido as well as inducing the release of testosterone through stimulating Leydig cells, while also acting to increase “free” testosterone by unbinding it from the inactivating hormone, SHBG. Lowering SHBG ultimately increases the amount of bioavailable testosterone your body can utilize helping promote muscle tone and fat loss.

Further, it has also been shown to inhibit aromatase, which is responsible for converting testosterone into estrogen. In addition, its impacts on controlling cortisol are quite impressive, a 200mg dosage for 4 weeks is shown to reduce cortisol levels by 16%. This acts as a kind of shield to defend the detrimental effects of chronic stress, resulting in lower tension, anger and supports optimal immune function.

Tongkat Ali is truly a very versatile ingredient, various other clinical studies have shown it can promote athletic performance, improve memory, increase blood flow, maintain healthy weight and support energy levels. Using the best extract available will deliver the best results, in Kingsblood it has provided you just that!

Ashwagandha is an Ayurvedic herb that is known for its adaptogenic properties such as reducing stress and fatigue. It also has been shown to support healthy cortisol levels. Healthy cortisol levels can help control blood sugar levels, regulate metabolism including reducing belly fat, help reduce inflammation, and assist with memory formulation. KSM-66® is commonly supplemented on its own due its effectiveness so it's inclusion in Kings Blood at a clinical dose demonstrates the power of this formula!

Ashwagandha is also a very potent testosterone booster. Research has shown Ashwagandha Root may increase total testosterone, LH and FSH. LH promotes higher free testosterone and FSH supports sperm production. It also has impressive benefits for athletic performance, including increases in strength and endurance as well as reductions in exercise induced muscle breakdown. KSM-66 is the best ashwagandha extract on the world market because it has the highest concentration, full-spectrum extract.

FUROSAP® is literally the gold standard in testosterone boosting ingredients. The superstar new kid on the block! It is a patented extract, standardized to 20% Protodioscin, derived from the seeds of Fenugreek herb. Using an innovative process, the active ingredient is extracted without affecting the chemical properties of the active fractions.

As previously mentioned, Protodioscin is a notoriously difficult and expensive ingredient to extract, hence why it is so often faked or under-dosed in various products on the market. K1ngs Blood spared no expensive and included it in the formula at its fully effective, clinical dose.

Protodioscin has repeatedly been shown to stimulate the secretion of luteinizing hormone (LH) and levels of DHEA, which helps to increase the level of total testosterone in the body and results in higher sexual function. It also promotes unbound free testosterone levels which improves muscle mass, fat loss, strength and endurance. In one study, 50 men between 35 to 65 years of age were given 500mg of FUROSAP® per day over 12 weeks and 90% had a 46% increase in free testosterone. Further, it also showed sperm morphology, sperm counts, mental alertness, mood, cardiovascular health, and libido performance were significantly improved. Extensive blood chemistry analyses revealed broad spectrum safety. No significant changes were observed in serum lipid function, cholesterol, triglyceride, HDL and LDL levels, and hemogram.

The science says it all, FUROSAP® has significant wide-spanning, beneficial effects, whilst also being an incredibly safe ingredient.

Boron is a mineral natural occurring in the environment and in several foods such as nuts. Boron is considered essential for the growth and maintenance of bone. It also helps the body metabolize vitamins and minerals in your diet, reduce inflammation and raise levels of antioxidant enzymes. These benefits result in improved blood flow and overall health that indirectly contribute to a healthy hormonal balance and sexual function.

Additionally, there is also evidence Boron has a direct impact on testosterone levels. One study found Boron can significantly increase free testosterone and decrease estradiol after one week of supplementation. Those results suggest Boron promotes a high rate of conversion of total testosterone to free testosterone. The form of Boron in Albion® is significantly more bioavailable than other forms of Boron so you get more of the general health and testosterone boosting benefits with K1ngs Blood.

Zinc is an essential mineral that is critical in maintaining your health. It boosts your immune system to allow you to fight off bacteria viruses. It also contributes to cellular processes in the body including the production of proteins and DNA. A zinc deficiency can impact testosterone and weaken your immune system. Studies have shown that zinc plays an important role in modulating serum testosterone levels in healthy men which makes it a perfect complementary addition to the formula.

Magnesium is an essential dietary mineral, and the second most prevalent electrolyte in the human body. It has repeatedly been correlated with higher testosterone in clinical research. Magnesium also has several other health benefits including blood pressure and blood sugar regulation, muscle and nerve function, and the construction of protein, bone and DNA.

Olympus uses bis-glycinate forms of Zinc and Magnesium because they have been shown to be as much as 40% more bioavailable than other forms.

How to take K1NGS BLOOD: