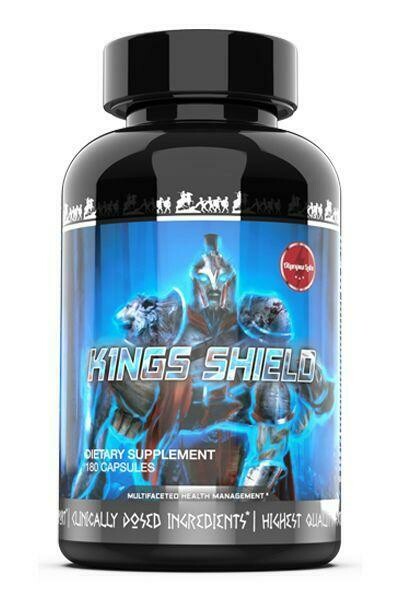 K1NGS SHIELD is the latest On Cycle Health Support innovation by Olympus Labs. True to its global reputation, Olympus Labs has spared no expense in crafting the perfect combination of ingredients to create the most comprehensive and effective health support supplement yet.

Utilizing a potent 98% extract for Matrine, a natural alkaloid isolated from the root of the leguminous plant. Matrine has been subject to a large number of studies, which have detailed its broad spanning pharmacological effects and mechanisms. Its primary rationale for its addition in K1NGS SHIELD is 3-fold – its potent Liver, Renal and Cardiovascular support.

It is well known that many hormonal products can have significant deleterious effects to liver function, in some cases leading to serious conditions such as jaundice and liver failure. This generally occurs due to the hepatotoxic effects of many androgens that are driven due to their cholestatic nature, meaning it leads to a build-up of toxic bile acids. Matrine has been shown in multiple studies to provide a powerful protective effect against cholestasis driven by compounds such as oral hormones. K1NGS SHIELD utilizes a highly effective dose and while it is incredibly powerful in its own right, it can also be stacked with TUDCA for further protection during the most hardcore cycles.

Additionally, Matrine has been shown in animal models to protect against Adriamycin-induced nephropathy, a kidney diseased condition, whereby it potently suppressed renal inflammation and supported restoration in function.

Finally, Matrine has demonstrated the ability to inhibit cardiac fibrosis, preventing the production and deposition of collagen in cardiac tissue. Further, it has been shown to inhibit myocardial apoptosis through activating the JAK2/STAT3 pathways, as well as offering potent antioxidant properties to alleviate acute cardiotoxicity, including the combating the deleterious effects of advanced glycation end products in the blood.

Is a patented, full spectrum extract of bioactive ingredients from wild crafted Indian gooseberry or Amla (Emblica officinalis) fruit, it is the first of its kind standardized with diacylglycerides derivatives of α-Linolenic acid and polyphenols.

Clinical studies have shown it to possess exceptionally powerful effects in alleviating dyslipidemia, a leading contributing risk factor to the development of atherosclerosis. Hormonal compounds, especially DHT derivatives are well documented in having a significantly deleterious effect on lipid balance and cardiovascular risk factors, it can be considered one of the most important risk factors where protection is extremely beneficial to long term health.

In a human double-blind, placebo-controlled trial, it was shown that major lipids including total cholesterol, triglycerides, LDL cholesterol and VLDL were significantly lower in the amla group compared to the placebo group. At the same time anti-atherogenic lipoproteins, such as HDL-cholesterol, were maintained at optimum levels. A 39% reduction in atherogenic index of plasma – a key indicator of cardiac health — also was noted in the amla group.

Further, all these effects were obtained without any reduction in plasma CoQ10 levels, a phenomenon typically associated with a number of lipid-lowering drugs. Other related parameters, such as fasting blood glucose, homocysteine levels, and apo-B/apo lipoprotein levels, also tended to lower quite significantly compared to placebo.

While possessing incredibly potent effects on alleviating dyslipidemia, it was also found to be very safe with no adverse effects noted. Truly an incredible ingredient that is the foundation for cholesterol support in K1NGS SHIELD.

Utilizing a highly potent 98% extract for Cepharanthine, a naturally occurring alkaloid derived from the root of the plants of genus Stephania. It has demonstrated to have unique, broad ranging pharmacological actions including, anti-inflammatory, potently scavenges free radicals, inhibits platelet aggregation, immuno-regulatory and mitochondrial membrane stabilization, which protects from damage. Additionally, there is evidence to support the assertion that it improves blood flow to peripheral tissues and organs, and it is also clinically used in Japan for that purpose. It also has long-established excellent safety profile.

Cepharanthine exerts many of its multifactorial effects through its actions on the AMP-activated protein kinase (AMPK) and NFκB signalling pathways, it has an incredibly important role in the K1NGS SHIELD formula for its support across multiple organ systems. Importantly, its attenuation of inflammation and lipid peroxidation supports the Cardiovascular system through conferring potent anti-atherosclerosis properties. Additionally, it has been shown to elicit potent liver protectant effects (when placed under stain) through its potent actions of reducing oxidation and inflammation. Studies have shown significantly reduced AST and ALT values when Cepharanthine was utilized and combined with a stressor. Furthermore, it has also displayed potent Renal protective effects in Renal ischemia-reperfusion model studies, leading to significantly reduced BUN and Creatinine levels, as well as reduced reactive oxygen species. K1NGS SH1ELD utilizes a clinically validated dosage to ensure it provides optimal effects and synergy with other ingredients in the formula.

A tree bark found in West Bengal, South and Central India, that is has been used medicinally in Ayurveda for the purposes of cardiovascular health and in particular its ability to exert potent cardioprotection. Utilized in K1NGS SHIELD is a high quality water extract standardized for Arjunolic Acid, at a clinically validated dosage. It can be considered one of the most beneficial compounds for Cardiovascular protection.

Studies have shown in various models that this extract exerts protection on cardiac tissue in response to various cardiac insults including beta(2)-adrenergic agonists and catecholamines themselves. Additionally, Arjunolic acid has been shown to act as a peroxisome proliferator-activated receptor α agonist in heart tissue, ameliorating hemodynamic load-induced cardiac fibrosis. It is well known than hormonal compounds induce stress on the cardiovascular system and protection should be considered a top priority, this is truly where Arjunolic acid shines.

Furthermore, Arjunolic acid exhibits important function in maintaining adequate levels of various antioxidant enzymes such as superoxide dismutase , catalase, glutathione-S-transferase , glutathione reductase and glutathione peroxidase , level of cellular metabolites, reduced glutathione, oxidized glutathione and thereby reduces the oxidative stress. This mechanism of action and they key property of Arjunolic acid has been further shown the protective effect also extends to the liver, pancreas, and kidney, synergizing with other ingredients in the formula.

Utilizing and extract of the iridoid glycosides fraction from roots known as ‘Picroliv’, which has been shown to be the most active compounds from the plant, for their hepatoprotective effects.

Historically, it has been used in the treatment of upper respiratory tract, fevers, dyspepsia, chronic diarrhea, and scorpion stings. However, it has been increasingly studied as a treatment for liver disorders since it has potent hepatoprotective (protective of the liver) properties when ingested prior to or taken after exposure to a toxin. Notably, Picroliv has been validated as protective against alcohol induced liver damage. Picroliv has also shown choleretic effect, anti-cholestatic and anti-viral effects. It also has the ability to stimulate the immune system and is devoid of any significant CNS and CVS, autonomic and other systemic activity.

K1NGS SHIELD utilizes a clinically validated dosage to provide potent liver support. Picroliv has been studied against numerous toxins and it consistently outperforms Milk Thistle Silymarins in potency. It has been shown to reduce circulating liver enzymes such as AST and ALT, as well as a Bilirubin under acute strain from conditions such as Hepatitis infection.

Additionally, there is evidence to show that Picroliv can support reductions in circulating triglycerides and LDL cholesterol as well as extending its liver protective effects to preventing the development of fatty liver condition. Finally, Picroliv’s protective mechanism of action has also shown to support Renal function, again synergising with other ingredients in the formula to amplify the protective effects.

Garlic has been associated with improving several health parameters, including being accredited as a powerful immune booster. The immunomodulating effects of garlic are achieved by increasing macrophage activity, natural killer cells, and the production of T and B cells. It also possesses antiviral, antibacterial, anti-fungal properties, the impetus behind garlic’s traditional use as a treatment for infections. Clinical trials have shown garlic to significantly reduce the number, duration, and severity of upper respiratory infections. Immune system support is a seriously overlooked area when utilizing hormonal compounds which in most cases have an immunosuppressant effect.

There also been research that has associated garlic supplementation with a blood pressure lowering effect of clinical signiﬁcance in hypertensive patients, with also a noted improvement in arterial stiffness. Although, there are several garlic preparations on the market, including garlic powder, garlic oil and raw or cooked garlic, Garlic extract was the preparation of choice for blood pressure treatment, given lack of odour and reflux, whilst maintaining all beneficial properties.

Further, Garlic extract has consistently shown to reliably reduce total cholesterol and Low-density Lipoprotein (LDL-C), while increasing High-density Lipoprotein (HDL-C) and also having a mild positive impact on reducing triglyceride levels. Additionally, Garlic extract has been shown to inhibit platelet aggregation, which further synergises with other ingredients in K1NGS SHIELD in this regard.

A well-known and highly researched ingredient, that has been found to possess a broad spectrum of biological, pharmacological, and therapeutic activities. K1NGS SHIELD utilises a high quality, clinically validated extract for 90% polyphenols, due to a large body of controlled human trials showing consistent, statistically significant lowering of blood pressure and heart rate.

It has also been found to act as a potent antioxidant that against free radicals and oxidative stress. It has historically been used as a treatment for several medical conditions including high blood pressure, high cholesterol, poor circulation, constipation, and gastrointestinal disorders. It has also been shown through clinical studies to possess greater antioxidant capacity than vitamins C & E and β-carotene. Due to its high antioxidant content, Grape Seed Extract can help protect against oxidative stress, tissue damage, and inflammation.

In addition, research has shown Grape Seed Extract induces endothelium-dependent relaxation that is then mediated by activation of the PI3K/Akt signalling pathway through a redox-sensitive mechanism, resulting in phosphorylation of endothelial NO (eNOS) and ultimately leading to greater vasodilation, blood flow and further supporting healthy blood flow and pressure.

Is the acetylated variant of the amino acid L-cysteine, it is a sulfur-containing amino acid that acts as a stabilizer for the formation of protein structures. Substantial research has revealed numerous pharmacological applications in humans. Importantly, it has been shown to increase levels of glutathione, the body's major antioxidant. Glutathione is critically important for detoxifying an array of toxic substances, including peroxide compounds, and other free radical–generating molecules.

It thereby exerts a profound protective effect on cells. N-Acetyl-Cysteine through its anti-oxidative effects exerts protection for the liver against oxidative stress and is clinically used to protect against liver damage from Acetaminophen overdose. These effects are noted in other organ such as Kidney, Pancreas, and the Cardiovascular system. Furthermore, N-Acetyl-Cysteine has been shown to reduce plasma Homocysteine levels, which are generally elevated from hormonal use and considered a significant cardiovascular system risk factor.

With many compounds, more isn’t always better, the dosage of N-Acetyl-Cysteine utilized in K1NGS SHIELD was highly measured to promote all of the above mentioned positive effects with limiting the potential negative effects on Hormesis, in this case attenuating the adaptation to resistance training.

Each bottle contains 30 servings of 6 capsules each, containing potent ingredients. Take 3 capsules twice daily or 6 at once with meal/meals. Do not exceed 6 capsules per day.