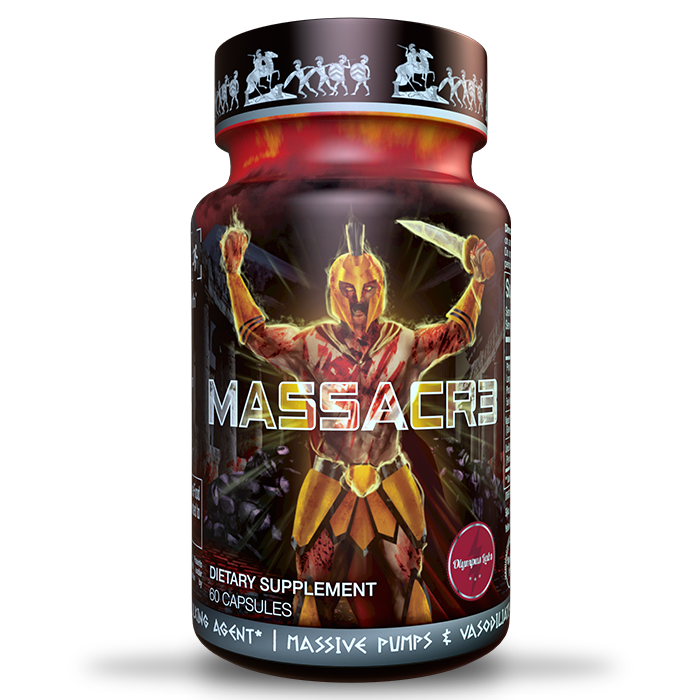 Olympus Labs has reformulated Massacr3 in order to introduce a new powerhouse anabolic ingredient, previously unknown to the supplement industry. We are talking about an extremely specific and uniquely structured compound found in Black Ginger, known as Tectochrysin — AKA 5-hydroxy-7-methoxyflavone.

Normally this rare compound is only found in extremely low quantities in the ginger's root, but Olympus's superior extraction process has yielded a remarkably high percentage extract. Then they paired it with PhytoFUSE technology to deliver the outstanding oral bioavailability and exceptional clinical efficacy you've come to expect from Massacr3, all the while enhancing protein synthesis, skeletal muscle hypertrophy, enhanced ATP production and endurance and recovery.

The other ingredients are what you already love: the tried and true, clinically documented VASO-6, as well as arguably the other greatest ingredient breakthrough in recent times, Urolithin-B, a natural ingredient that is 80% more anabolic than testosterone, 57% more effective at increasing protein synthesis, helping to increase muscle growth while simultaneously preventing the breakdown of muscle.

Derived from the roots of Black Ginger, this ingredient is essentially a building block which your body uses as a blueprint to create its own benefit. A study into the various Methoxyflavones in Black Ginger showed that Tectochrysin was the most potent of the Methoxyflavones in respect to skeletal muscle hypertrophy, delivering the greatest increases in Myotube diameter. Its beneficial effects include increased protein synthesis and nitrogen retention while promoting other anabolic effects such as increased, muscle endurance, muscle recovery, and lean muscle mass through increasing skeletal muscle hypertrophy. Additionally, Tectochrysin has been shown to aid in skeletal muscle ATP production, skeletal muscle glucose uptake and exercise performance. PhytoFUSE, is a unique delivery technology that enhances the bioavailability and absorption various classes of compounds, including Methoxyflavones. Research has shown that this method of delivery can enhance potency and duration of action substantially!

Vaso6™ is a gallate-enhanced oligomer made up of dimers, trimers, tetramers and pentamers that is a powerful stimulator of nitric oxide production. It can be derived from the extracts of grape seed or green tea. Research has shown that extracts of grape seeds (GSE) causes endothelium dependent relaxation (EDR) activity in vitro. EDR activity involves the release of endothelial nitric oxide (NO) release and subsequent increase in cyclic guanosine monophosphate (GMP) levels in the vascular smooth muscle cells ultimately increasing vasodilation and blood flow. So why not just use grape seed extract which is inexpensive and widely available? Because Vaso6™ only contains the components of GSE that are EDR active, meaning it only contains the components that will improve blood flow.

Further isolation and characterization of GSE was performed by scientists from the University of South Florida, using a process known as Toyopearl Fractionation, that identified the extract could be separated into seven fractions (A–G). Only fractions (D–G) were EDR-active so they were further separated into 25 individual compound peaks by high performance liquid chromatography (HPLC), 16 of which were EDR active. Analysis of these 16 peaks identified Procyanidin content, which are oligomeric compounds formed from catechin and epicatechin molecules. Peak G6, a trimeric procyanidin gallate, was identified as the peak that had the highest EDR activity and was confirmed as Epicatechin-(4-8)-Epicatechin-(4-8)-Epicatechin-Gallate, hence the reason we refer to it as Superior Epicatechin. Vaso6™ contains only the peaks and fractions of GSE with the highest EDR activity including peak G6, hence the name Vaso6™.

Furthermore, the gallate-enhanced catechins in Vaso6™ activate the enzyme eNOS to produce NO. The enhancement of blood flow caused by Vaso6™ improves the shuttling of glucose, insulin and other nutrients to metabolic targets. Glucose and nutrient uptake is a critical step to activating muscle protein synthesis. Therefore, you want the extreme vasodilation that Vaso6™ provides prior to your workout. Furthermore, Nitric Oxide mediates muscle hypertrophy. Upon mechanical loading, NO reacts with superoxide to generate peroxynitrite. The latter then activates the TRPV1 (transient receptor potential cation channel subfamily V member 1) channel, causing an increase in intracellular Ca2+ levels via release from the sarcoplasmatic reticulum. Such elevation causes an increase in protein synthesis through TORC1 activation. Recent studies demonstrate that NO-synthase participates in the regulation of protein and energy metabolism in skeletal muscle by fine-tuning and stabilizing complex signaling systems which regulate protein synthesis and degradation.

NOS activation during muscle stretching or resisting exercise initiates proliferation of G0-satellite cells. Released NO passes through the sarcolemma, and activates hepatocyte growth factor (HGF) through the activity of matrix metalloproteinases. Activated HGF interacts with c-met receptors of satellite cells, promoting their entrance into the cell cycle. Therefore, during resistance exercises NO works as an activator and as a regulator of signaling, and as a trigger of muscle hypertrophy. The end result is a functional pump!

To summarize, Vaso6™ enhances exercise capacity and endurance. It also increases vasodilation and blood flow which ultimately improves the shuttling of glucose, insulin and other nutrients to your muscles. The end result is the activation of muscle protein synthesis. In short, better performance and bigger muscles.

Urolithin B is one of four metabolites of ellagic acid or ellagitannins. The first product of ellagic acid catabolism is urolithin D, and with the successive losses of hydroxy groups urolithins C, A, and B are formed. All mammals seem able to produce urolithins from the microflora in the gastrointestinal tract after the ingestion of some fruits. In healthy humans, urolithins A and B are most abundant. Research has shown supplementing the diet with ellagitannins mitigates muscle damage experienced during intense exercise and protects muscle against stresses induced by a high-fat diet. However, since ellagitannins are known to have low bioavailability, it is believed that ellagitannin-derived metabolites are responsible for the reported effects. Therefore, the focus of clinical research has focused on characterizing the effects of urolithins themselves.

Through that effort it was observed that myotubes in culture were bigger after incubation with Urolithin B. What this really means is that Urolithin B holds tremendous promise to increase skeletal muscle mass. Clinical research on Urolithin B in mice found that it enhanced myotubes growth and differentiation by increasing protein synthesis. It demonstrated an ability to inhibit the ubiquitin–proteasome pathway (UPP), the principal mechanism for protein catabolism. It also induced muscle hypertrophy and reduced muscle atrophy. Signaling analyses indicate a connection between the androgen receptor and the mTORC1 pathway, possibly via AMPK. Olympus Labs is extremely excited to bring this powerful compound to the market. It is the crown jewel of the formula and the ultimate catalyst in the quest RE!GN supreme!

MASSACR3 is a perfect example of the Olympus Labs mantra; Innovation, Value and Results, being executed flawlessly. A supplement that is quite different than anything available on the market because Olympus Labs prior uses the consumer over profit. So stop wasting your time and money on ineffective muscle builders or mass gainers. MASSACR3 will deliver real results that you didn’t think was possible. MASSACR3 increases blood flow and vascularity, induces muscle hypertrophy, stimulates protein synthesis and reduces muscle atrophy. In short, MASSACR3 does exactly what you want when bulking; promotes gains in muscle mass and reducing muscle breakdown. Every ingredient in MASSACR3 individually increases muscle mass but works synergistically to deliver exceptional results. The type of results that will allow you to MASSACR3 every workout!

Take 2 caps 20-30 minutes pre-workout on training days. On rest days, take one cap in the morning and one cap in the evening on an empty stomach with water.