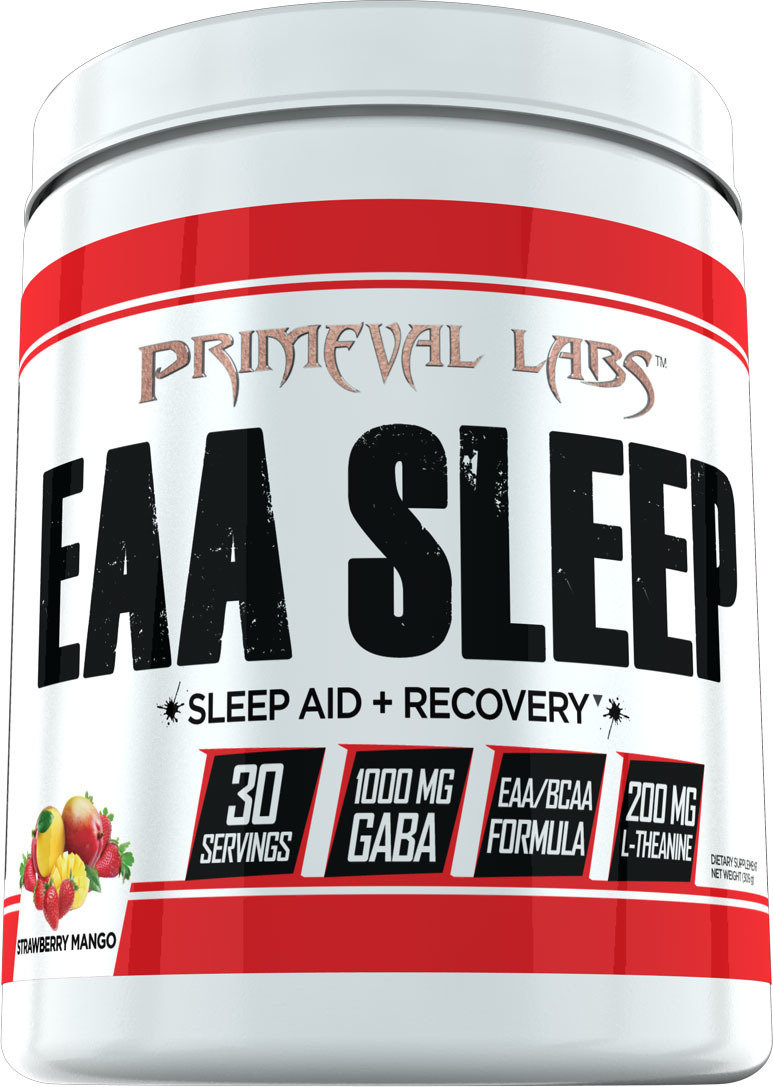 Not only is EAA Sleep designed to help with better quality rest each night, but it also provides you with essential amino acids to help the body recover from training and activity.

Essential Amino Acids (EAAs) are vital to your ability to maintain, repair, and build muscle. EAAs are really what you need to maximize muscle growth and accelerate recovery.

Your body requires all nine essential amino acids in order to build muscle. The BCAAs comprise just three of the nine aminos required for protein synthesis. If you’re only supplementing with BCAAs you’re starving your body of the rest of the EAAs it needs for tissue repair and growth. Plus, research has pretty conclusively shown that EAAs are superior to BCAAs in just about every category, including everything from muscle growth to performance.

The perfect formula to end your night with.

Sleep Aid Blend:
- Gamma Aminobutyric Acid (GABA)
- L-Theanine
- 5-Hydroxytryptophan (5-HTP)
- Melatonin
Branch Chain Amino Acids Blend:
- L-Leucine
The best known, most studied, of the amino acids is Leucine. It’s also the primary reason BCAA’s have gotten so much hype over the years.
Leucine is a potent stimulator of the mechanistic target of rapamycin (mTOR). FYI, mTOR previously stand for mammalian target of rapamycin.
mTOR is a cellular signal pathway that functions as the main regulator of cell metabolism, survival, growth, and multiplication. There are several different mTOR pathways in the body, but the one we’re primarily interested in when discussing muscle growth is mTOR1. This particular pathway is the driver of muscle protein synthesis (i.e.muscle building).
Leucine is also beneficial for combatting catabolism too, making it extremely useful for staving off excessive muscle protein breakdown during training.
- L-Isoleucine
Leucine’s weaker “younger brother”, Isoleucine can also stimulate protein synthesis in the body, but not to the degree that Leucine can. Isoleucine really shines in its ability to enhance glucose uptake and utilization use during intense exercise, such as weightlifting or high intensity interval training (HIIT).
- L-Valine
The third leg of the BCAA triumvirate is Valine. While it hasn’t been as heavily studies as Leucine, Valine has been well documented to improve glycogen synthesis in skeletal muscle, prevent catabolism, and support energy production.
Essential Amino Acid Blend:
- L-Lysine Hydrochloride (HCI)
L-Lysine is best known as an amino that enhances calcium absorption and recovery from injury, most likely due to its role in protein construction. It’s also required for carnitine production, making it essential to fat metabolism. Remember, carnitine is a substance that aids the conversion of fat into useable energy.
One other thing to note about lysine is that it is a key player in the formation of cartilage, collagen, skin, and tendons.
- L-Threonine
The last amino acid to be discovered was Threonine. As one of the EAA’s, threonine is necessary for protein synthesis, but more specifically, it’s used to produce glycine and serine, which drive muscle protein synthesis in the body. Also worth noting is that threonine works alongside aspartate and methionine to support fat digestion in the liver, a process also known as lipotropic function.
- L-Phenylalanine
Phenylalanine is key to proper Central Nervous System (CNS) function. Upon entering the body, phenylalanine crosses the blood-brain barrier (BBB) where it’s used to synthesize important neurotransmitters including adrenaline (epinephrine), noradrenaline (norepinephrine), and dopamine. These three neurotransmitters govern how you view and interact with everything around you. Plus, these three neurotransmitters also enhance mood, energy, and focus, three key factors for a productive workout.
- L-Tryptophan
L-tryptophan is the lone precursor to serotonin, a key neurotransmitter for behavior, mood, and cognition. Unfortunately, tryptophan is the least plentiful amino acid in the body, which makes supplementing with it that much more important. Without adequate tryptophan you can suffer from serotonin deficiency, setting you up for some serious bouts of depression!
- L-Histidine
Histidine is a precursor to histamine and essential for cognitive function and wakefulness, as it’s required for the production and maintenance of the myelin sheaths that envelop nerve cells. Histidine also supports signal transmission from the brain to the various regions of the body.
On top of that, this essential amino acid also aids carnosine production, a powerful intracellular buffer. Histidine binds to beta alanine to form carnosine, which enhances your ability to remove metabolic waste products, such as lactic acid, during training, allowing you to train longer before succumbing to fatigue.
- L-Methionine
Like all of the other EAA’s, Methionine is involved in countless essential functions in the body, but the most well-known of these is as a lipotropic -- a compound that aids fat digestion in the liver. Methionine also serves as a precursor to the amino acid / antioxidant L-Cysteine, which the body uses to combat free radicals and oxidative stress that can accumulate as a byproduct of exercise.
Save this product for later
Display prices in: USD