ProMera Sports and the CON-CRET brand are deeply rooted in rigorous science and dedication to quality.

ProMera’s parent company, Vireo Systems (named for the Latin word for health and vigor), was formed in the culture of pharmaceutical science and forensic toxicology, where the highest standards of formal research and scrutinized certifications are required. Those standards have been the driving force behind our innovation, and the bedrock of our reputation as one of the most trusted brands on the market.

The company began in 2002, with university-based scientists studying and testing amino acid conjugations. On January 23, 2003, Vireo made a fortuitous miscalculation with a batch of acid catalysts resulting in the formation of the molecule that would become CON-CRET.

After that batch miscue, Vireo identified the molecule as creatine hydrochloride (C-HCl) and began studying its properties. Over the next few years, Vireo personnel were increasingly impressed with the stability, solubility, and bioavailability of C-HCl. One evening, Vireo founder Mark Faulkner was pondering just how unique C-HCl was, and thought “compared to other creatines, this molecule seems very special…it is a specially conjugated creatine…its characteristics are like concentrated creatine…CONjugated CREATine…CONcentrated CREATine…hmmm, CON-CRET”.

Vireo partnered with a distributor in 2007 to form ProMera and bring CON-CRET to the market. When the staff at GNC heard Faulkner speak about CON-CRET they said, “if what you say about this molecule is true, this will revolutionize the creatine category…it will be the future of creatine”.

10 years and 5 patents later, Vireo has re-taken full control of ProMera and the CON-CRET brand…and CON-CRET remains “the future of creatine”.

Refine by
Sold out 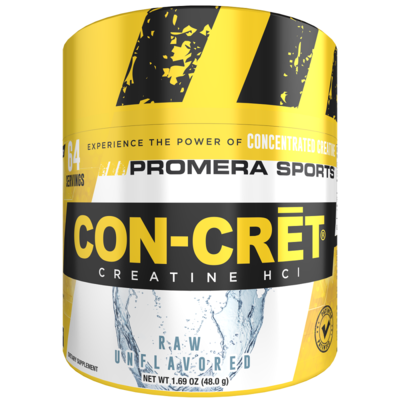 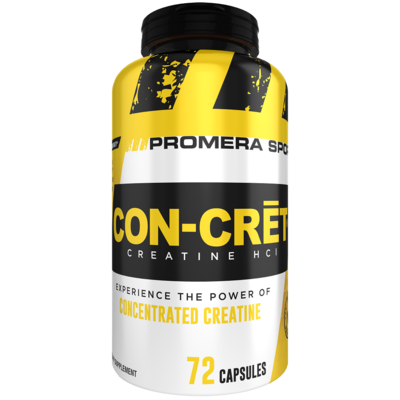