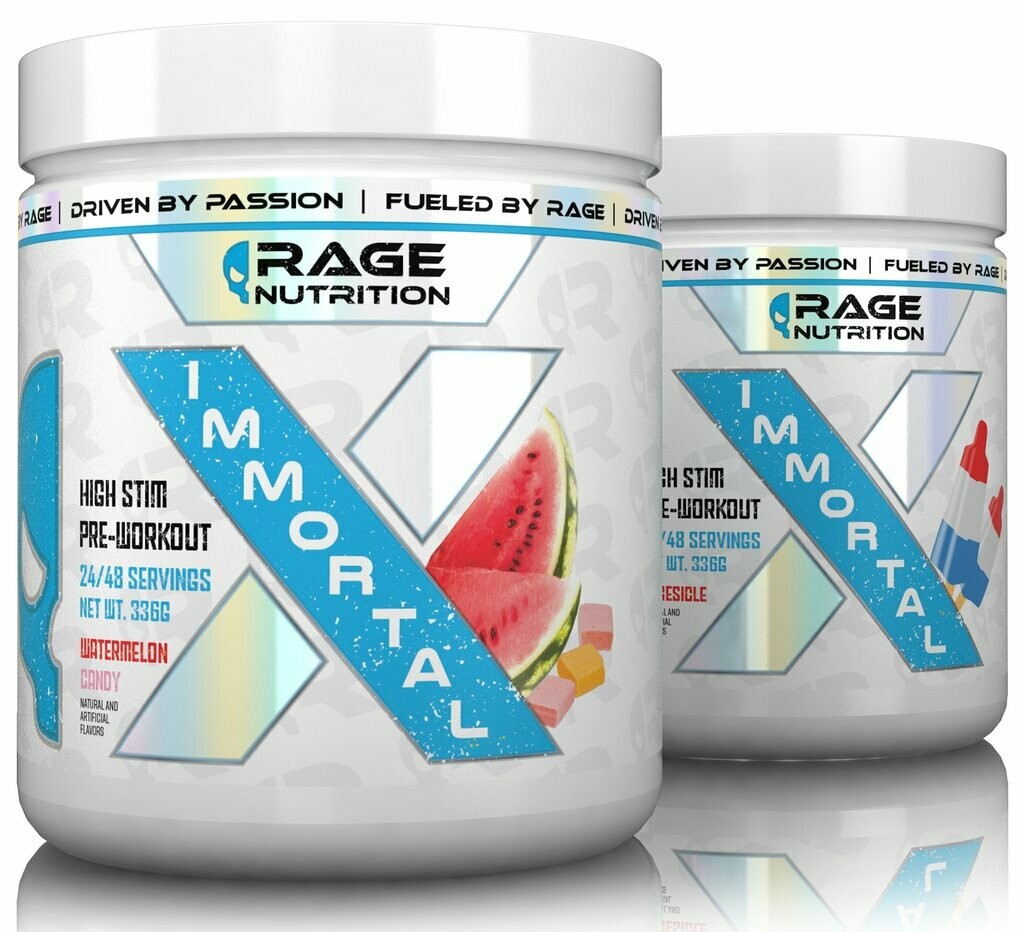 Arriving on the scene in 2018, Immortal quickly became one of the most prominent names in the supplement industry for stim junkies around the world. From the United States all the way to Australia, Immortal was recognized as one of the strongest pre-workouts in the world and we didn’t have to use banned ingredients to achieve those claims.

While still wanting to be labeled as a high-stim pre-workout, we knew that Immortal needed some tweaks to become a more well-rounded all-in-one formula and with that, Immortal X was born.

Immortal X has been formulated to provide the most insane skin splitting pumps, non-stop high energy and tunnel vision focus through the synergistic effects of the 23 ingredients being used.

Citrulline is a non-essential, non-protein amino acid that is vital in the helping to promote vasodilation. For nitric-oxide production, citrulline breaks down into arginine and is a far more bio-available than arginine itself, thus it is a staple in the supplement industry as one of the most effective pump ingredients on the market.

Betaine (trimethyl glycine) is a tripeptide which functions as an osmolyte in human tissues. Osmolytes main function is maintaining cell integrity by shuttling water back to the cells and helping to maintain cell volume and integrity. On top of helping to increase cell volume, betaine has been shown to help increase both force and power.

Sodium is one of the most underrated ingredients in the supplement industry and it's effects on the "pump" are almost unrivaled. Every cell in the body utilizes what is known as the sodium/potassium pump and sodium is required for balancing out fluids within the cells, nerve signaling and very importantly, muscle contractions.

Pine bark extract is hands down the most underrated supplement ingredient on the market today for sports nutrition. While PBE has a vast array of health benefits, the main driving force behind having PBE in Immortal X was due to its large concentration of flavanoids (procyanidins) which are derived from catechin and epicatechin molecules. The large concentration of flavanoids found within pine bark extract have a huge impact on blood flow throughout the body and help to increase blood circulation in all parts of the body.

Another flavanoid utilized to help increase blood flow within the body is Icariin. Icariin helps to increase nitric oxide synthase which is an enzyme used to catalyze nitric oxide production in the body.

To help bring all of these ingredients together and to ensure that they are able to provide the most skin splitting pumps both during and after your workout, Astragin has been added to Immortal X. Astragin has also been shown to increase the absorption of L-Citrulline by up to 45% as well as increasing ATP production via the liver by up to 18%.

Formed from phenylalanine, Tyrosine is a non-essential amino acid that can produce dopamine, epinephrine and can help replenish nonepinephrine in the body. This increase helps to increase both focus and cognitive performance during acute bouts of exercise. While many companies use the lesser form, N-Acetyl Tyrosine, we use the more bioavailable form of pure L-Tyrosine.

There isn't much to say about caffeine except it is one of the most widely consumed and widely studied ingredients to date. But, one of the biggest misconceptions centered around caffeine is that it is vasoconstrictive. Upon initial ingestion, caffeine is vasoconstrictive, however, after a short period of time, caffeine becomes a vasodilator and can safely be taken in the 600mg to 1000mg dose (body weight dependent).

Also known as Eria Jerensis, it is quickly becoming one of the more popular ingredients within the industry for its ability to be used as both a stimulant and a mood enhancer. Eria Jerensis increases both dopamine and noradrenaline within the body which provides both a euphoric feel good sensation as well as a cognitive boost in concentration levels, alertness and focus.

Theobromine is a naturally occurring alkaloid with a similar molecular structure to caffeine. Although structurally similar, theobromine is a much milder stimulant but it’s effects are longer lasting. While also being used as a stimulant, theobromine has been shown to help to dilate blood vessels in the body which can lead to greater nitric oxide synthesis.

Also known as dicaffeine malate, Infinergy is a trademarked version of caffeine that has been bonded to malic acid and yields roughly 75% caffeine. The molecular bond between caffeine and malic acid means that the effects of the caffeine will take longer to kick in, thus providing longer lasting energy and a preventative measure against the dreaded caffeine crash.

Synephrine HCL is a naturally occurring extract of bitter orange. Like a few other ingredients in Immortal X, it is a beta-2 adrenergic agonist. What this means is that it can cause an increased dilation in bronchial passages as well as vasodilation in both the muscles and liver.

Halostachine is a new player in the supplement game. While its effects haven’t been widely studied to date, it is knows to have similar actions to that of ephedra but on a much smaller scale. As with synephrine, it is also a beta-2 agonist which proves that it has a well rounded effect on both stimulation and vasodilation.

Huperzia Serrata Extract is standardized to 1% for Huperzine-A. Huperzine-A is an MAO inhibitor that is used to prolong the half-life and effects of certain ingredients like Eria Jerensis and Halostachine.

Rauwolfia is standardized for Rauwolscine which is an alpha 2 adrenergic antagonist and is a very powerful central nervous stimulant.