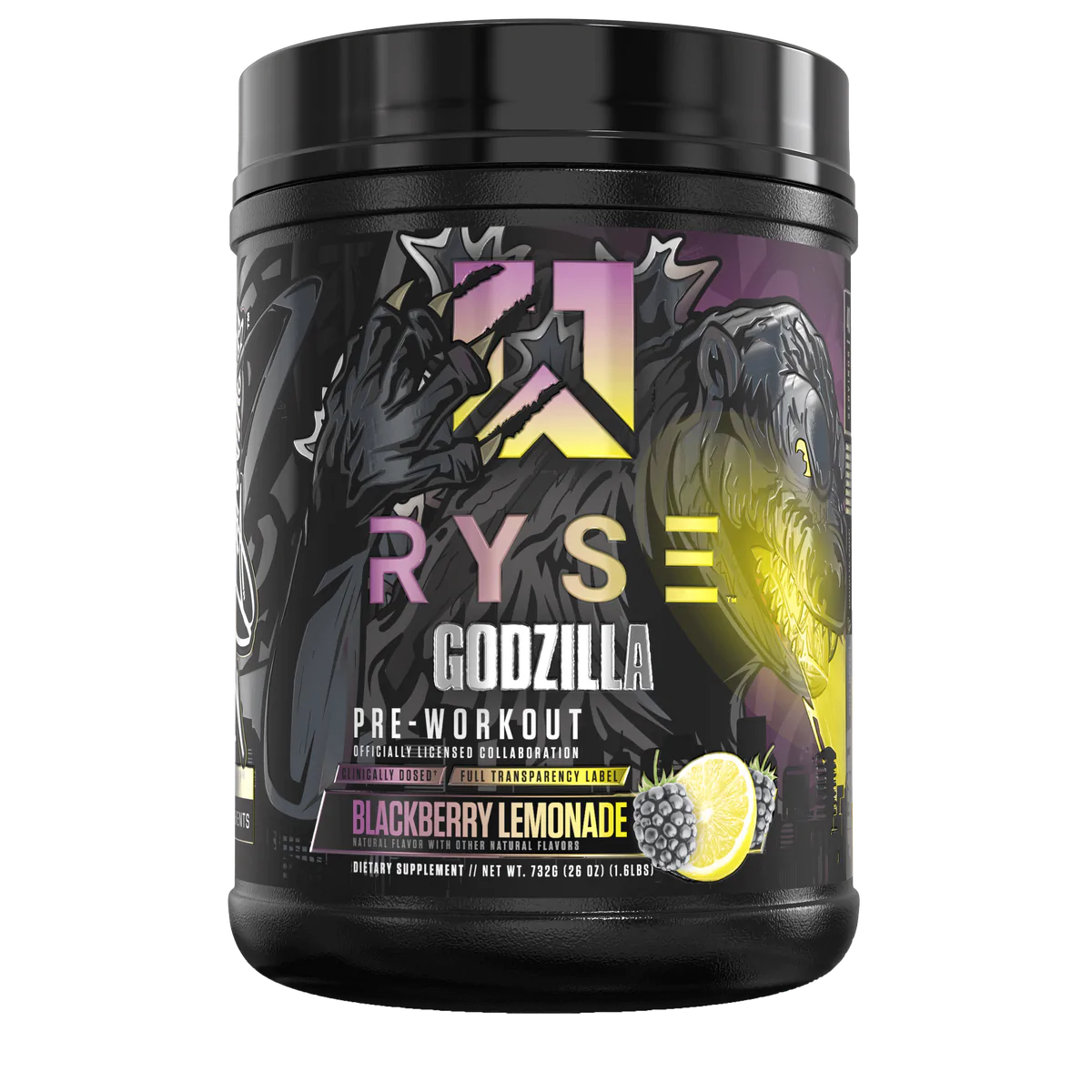 There can only be ONE King and the King of Pre-workouts has arrived. The officially licensed Noel Deyzel X Godzilla® Pre-Workout is an absolute monster. Packing a massive 40g serving size, this giant delivers city-crushing pumps, razor sharp focus & long-lasting explosive energy. Loaded with 12 ingredients, 5 clinically studied trademarks and a delicious blast of flavor, your new favorite pre-workout is ready for battle.

Let me introduce you to the newly crowned King of pre-workout. This official Godzilla® licensed collaboration designed by yours truly promises to deliver an experience unlike any other. In this formula we have maxed out the three biggest factors that go into a pre-workout, that being… Pump, Energy, and Focus. A great pre-workout is built not on ingredients alone but on synergy of ingredients and in my signature series Godzilla® pre-workout, we’ve put together an absolute monster from every angle.

This formula is so incredibly loaded, a 1 scoop, half serving is plenty to delivery an incredible workout. Only advanced users should even dare take a full 2 scoop serving to deliver a God-like workout experience.

We pack a total of 11g of Citrulline per serving into Godzilla. L-Citrulline is a non-essential, non-protein amino acid that forms during the urea cycle and forms ornithine when combined with carbon dioxide. Research has shown that Citrulline supplementation can increase your resistance and endurance training by increasing blood Arginine levels (even better than Arginine supplementation itself). You can expect improved muscle endurance, more blood flow/circulation, decreased muscle soreness and less fatigue during training. In addition to the 9g of pure L-Citrulline, we also include 2g of NO3-T® patented & university studied Citrulline Nitrate. Citrulline Nitrate works by bonding a molecule of l-citrulline to a molecule of nitrate. This delivers the same nitric oxide boosting pumps from the nitrate-nitrite pathway instead of JUST relying on the citrulline-arginine pathway. 2 pathways are better than one!

500mg of Pink Himalayan Salt brings a few different benefits to Godzilla®. Sodium in general acts as a power electrolyte which will help replenish fluids lost during intense training. These fluids are an important part of productive healing & of course, a nasty pump. The major benefit of Pink Himalayan Salt as opposed to generic sodium is 84 trace minerals which are completely additive free.

Let’s talk about the focus aspect of my pre-workout, this powder contains 20 milligrams of patented Vincamine as Thinkamine® which in a full serving has double the amount of our Loaded Pre. Thinkamine® is one of the newest and highly sought after nootropics on the market giving you that laser focus & euphoric feeling to uplift your workouts. This, in addition to efficacious doses of patented Choline Bitartrate (as Vitacholine®) and Theobromine come together and act as the perfect trifecta of laser focus & cognitive enhancement.

We also have a super serving of Beta-Alanine. Beta-alanine is a non-essential amino acid that’s naturally produced in the body and found in foods such as certain meat and fish. It combines with the amino acid histidine to form the dipeptide called carnosine. Over time, carnosine acts as a buffer to help delay the onset of lactic acid and muscle fatigue and failure, while building endurance and improving recovery. The body’s natural production and most diets, however, do not have enough beta-alanine needed to improve athletic performance. Supplementation with Beta-Alanine at elevated dosages has been shown by more than 55 independent scientific studies to boost athletic performance.

RYSE takes a unique approach to the lineup, utilizing the latest science and ingredients backed by clinical evidence. Not only do we use the best patented ingredients that are backed by research, we TEST multiple times. You'll always get what the label says and only use the highest quality ingredients, many are patented. By looking at our labels you will see that we cut no corners creating our products and never will, that is our commitment to you!