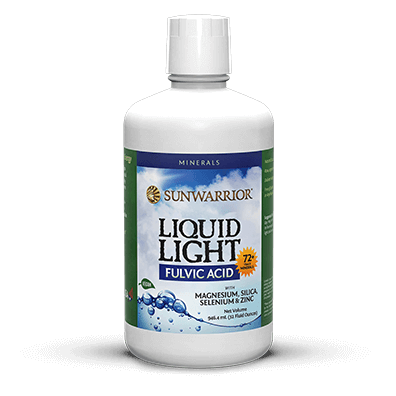 Sun Warrior Liquid Light Natural Fulvic Acid Mineral Complex is the best detoxifying electrolyte nutrient transporter on the Planet. Sunwarrior's new detoxifying Liquid Light will brighten your day! Sunwarrior Liquid light (Fulvic Acid) has the capability of transferring metals to and from metallo-proteins in vivo. These proteins play a role in metal storage and sequester excess metal ions, preventing toxicity. Metallo-protein concentrations are the highest in the liver where metals accumulate in the in portions of this organ. Metallo-proteins can be found in many other human tissues, including small amounts in the blood plasma, which suggests that these proteins play a role in the transport of metals as well.

Their product comes from an ancient petrified plant deposit in rural part of Utah. Competing brands are in New Mexico near Los Alamos and Sandia labs- site of Nuclear testing and suspect of radiation fall out.

Liquid Light is a plant based fulvic acid mineral complex created by nature and cold process extracted into a liquid solution that is the strongest natural chelating agent within living structures.

In Nature, Liquid Light provides some of the major and trace elements of nutrition but plays a role much more important than that. Liquid Light aids in the absorption and assimilation of all other nutrients it comes in contact with through the chelation process.

Liquid Light is a powerful natural electrolyte contributing to both electrical and chemical balance within the cell.

(Note, the product is in a plastic bottle for easy handling. The fulvic/mineral complex neutralizes any possible toxic affect.)

Helps remove toxins in the body.

Research indicates that absorption of cadmium and Mercury from the gastrointestinal tract and its toxicity are influenced by the supply of element such as Zn, Cu, Fe, Se, Ca, and Vitamin C. The ability of (Fulvic Acid), as an ion exchanger, may free its trace elements bound in chelate form for uptake into the tissues and bind other elements that are readily available, such as cadmium. At the same time, a number of essential elements are provided that may decrease the ability of cadmium uptake and absorption in the gastrointestinal tract. The improvement of liver and kidney enzymes could be attributed to the effect of the preparation on the micro-element status and balance in the body, which would then play a role in the functioning of these enzymes. Sunwarrior Liquid light (Fulvic Acid) was studied for its effect on the metabolism of trace elements in 51 healthy adult volunteers. Following two-weeks of oral administration of (Fulvic Acid), blood lead and cadmium levels decreased significantly. Furthermore, Sunwarrior Liquid light (Fulvic Acid) decreased absorption of cadmium and lead from food or environmental exposure based on urine measures of these metals. Sunwarrior Liquid light (Fulvic Acid) had no significant effect on blood parameters studied (i.e. haematocrit, haemoglobin, leukocyte count; SGOT, GGT, ALP; and, Na, K, Ca, and P).

As indicated by the previous data, the standardized Sunwarrior Liquid light (Fulvic Acid) appears to be an effective chelator of offending heavy metals. Furthermore, it shows a protective effect against radiation in vivo. Its benefits could be utilized in the prevention of heavy metal contamination in workers in hazardous occupations, by decreasing the absorption and increasing the elimination of toxic heavy metals like cadmium. Furthermore, this standardized Sunwarrior Liquid light (Fulvic Acid) would be beneficial in eliminating heavy metals that can be accumulated throughout a lifetime of environmental exposure, and alleviating the physiological consequences that occur with irradiation. Animal studies show a similar mechanism of action when comparing them with the studies in humans. Both indicate that Sunwarrior Liquid light (Fulvic Acid) may work to decrease the absorption of these heavy metals as indicated by its effects on the excretion of these toxic elements in the urine.

The Legend of Sunwarrior

Thousands of years ago there lived a valiant long lived race of immortals called Sunwarriors. The Sunwarriors, through diligence and faith, conquered all darkness, sickness, disease and poverty through the light and power of an ancient mystery path called Agape. Through the Spirit, knowledge, and power of Agape, the Sunwarriors were transformed and transcended by pure light energy. The desire of the Sunwarriors were to elevate the spirit, mind, and body of all living things on this planet and to gain ascension to a higher sphere of existence. Many adhered to their influence and transcended this mortal plane to a higher sphere of being.

But then ominous times were ushered in by a ruthless regime of unenlightened beings who spread false propaganda misinformation to the world. This program turned the planet against the Sunwarriors and a dark time was ushered in with much suffering, sickness, disease, poverty and hopelessness. The Sunwarriors saddened, left the planet and were forgotten and remembered no more. But a promise was made that they would return when the planet was near the edge of destruction.

So the Gods in their mercy are sending the Sunwarriors back to this planet to finish the job they started millennia ago. But many of the Sunwarriors, coming to this earth, have lost their way and forgotten who they are and what their mission is on this planet. So the Gods set a beacon of light to gather the lost Sunwarriors and guide them back to the knowledge of the ancient way, the way of Agape. Now the time of darkness and ignorance and sickness, and disease is coming to a close and the Sun arriors are gathering, armed with the pure light of truth and the spirit and power of Agape to re-introduce the Sunwarrior Way and path to transcendence and ascension.

Enter the Time of the Sunwarrior..

†Percent Daily Values are based on a 2,000 calorie diet. Your diet values may be higher or lower depending on your calorie needs.

Take 1/2 capful morning and evening or as needed. May be mixed with water or juice.