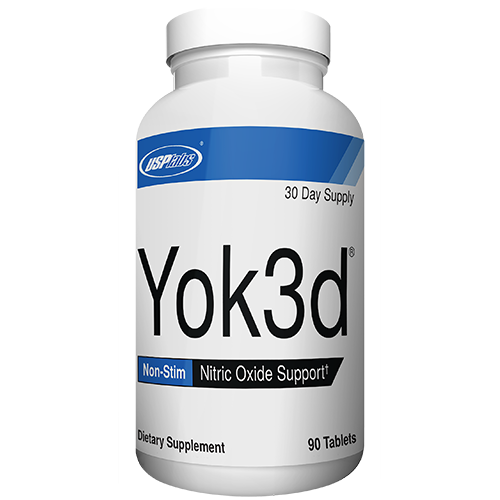 Arginine is a precursor to nitric oxide, the “miracle molecule” that expands blood vessels to optimize blood flow. Silicon is concentrated within the arteries, where it helps maintain their structural integrity. L-citrulline increases arginine plasma content by improving the ammonia recycling process and nitric oxide metabolism. After ingesting citrulline, L-citrulline is converted into arginine in the kidneys. Supplemental L-arginine provides a spike of L-arginine in plasma, while supplemental L-citrulline increases arginine plasma levels over a longer period of time. Relative to arginine, citrulline is better absorbed in the intestines and is known as a better source of bodily arginine than arginine itself. Our unique citrulline silicate (Nitro-RX®) provides the benefits of both arginine and silicon, along with additional benefits from the unique synergistic combination.

The next potent ingredient in Yok3D® is the Red Wine Extract standardized to 30% glycerol and 50% polyphenols – most Glycerol monostearate (GMS) powdered glycerol products typically utilized in sports nutrition offers a fraction of the potency of the Red Wine Extract used by Innovative Laboratories in Yok3D®. GMS usually is 1.5 to 5% pure, whereas, Yok3D® is proprietary product contains 30% minimum of 25% free molecular glycerol and has numerous added advantages over straight glycerol alone. Glycerol in Yok3D® is easily absorbed and distributed throughout the intracellular space, increasing the concentration of fluid in the blood and tissues, which positively affects osmolarity and hyperhydration. This brings potential benefits for endurance athletes and promoting excess blood flow associated with resistance training. Glycerol has also been shown to help athletes store extra water, delaying the need for additional hydration. This suggests improved efficiency in exercise, and enhancement of plasma and intramuscular volume expansion, producing a more engorged muscular look. Red wine has been used by competitive bodybuilders for decades due to its special digestive properties that increase vascularity when consumed prior to a competition or photo shoot. Therefore, Yok3D® utilizes a proprietary red wine extract that will result in more noticeable and pronounced vascularity in most parts of the body. Basically, blood flow to major and minor muscle groups increases, causing the physique to appear fuller and causing veins to appear more pronounced, especially when in conjunction fatigued muscle groups via resistance training. Blood flow to that particular area increases to sustain oxygen delivery. Yok3D® also utilizes a French Grape Seed Extract standardized to 95% Oligomeric Procyanthocyanidins (OPC) that has been found in clinical studies to increase nitric oxide substantially after exercise.

The last extremely potent ingredient in Yok3D® is Arginine Nitrate. Arginine Nitrate has the extreme ability to affect VO2 max unlike any product on the market. VO2 max goes by many other names, including maximal oxygen uptake and maximal aerobic capacity. Essentially it is the capacity of one's body to absorb and utilize maximal oxygen during training. The V stands for volume, and the O2 stands for oxygen. Obviously, ensuring peak VO2 max is a major factor in supporting endurance potential. Yok3D® ability to increase VO2 is the endurance athlete’s answer to peak performance and endurance. Yok3D® is designed to significantly increase strength, speed and power, and enhance recovery. These increases in performance and endurance are mediated by enhancing maximal oxygen uptake capacity (VO2 max), delaying fatigue, and preventing muscle damage during intense exercise. Yok3D® unlocking your potential for a monstrosity of lean mass gains and punishing pumps. Yok3D® has a menacing one-of-a-kind, proprietary formulation that crams your muscle cells to the max with a feral fuel that will invoke skin tearing pumps and insane vascularity, sickening strength, Hardcore focus, and unrelenting endurance coupled with heightened hormonal and insulin levels. The interactive impact of Yok3D® will keep you focused throughout the entire workout and have you wishing you did not have to end the training day. Yok3D® can be stacked with Jack3D™ for ultimate success!